On 21st January 2017 at 10.45 AM, a 52 year old female was brought by relatives with complaints of sudden onset itching all over the body, including palms and soles within 20 minutes of oral consumption of tablet 40 mg patoprazole. She had had an episode of giddiness, blackout, and she had collapsed in the bath room and suffered from urticaria all over the body. On arrival to the hospital, her pulse and blood pressure were not recordable, her extremities were cold and there was puffiness of the face, and congestion of the conjunctivae (Figure 1). She was put on a multipara Cardiac noninvasive blood pressure monitor. Her Blood pressure was 65/42 MM Hg recorded by non-invasive method. Her heart rate was 120 beats per minute and oxygen saturation was 88%. There is no past history of allergy, bronchial asthma or hay fever. She was complaining of a burning sensation in the chest, for which her family doctor had prescribed pantaprazol. She denied any history of consumption of NSAID. She was a known case of hypothyroidism and hypertension. She had been taking levothyroxine 88 microgram on empty stomach daily, amlopine 5 mg and metaprolol 50 mg for the past 8 years. 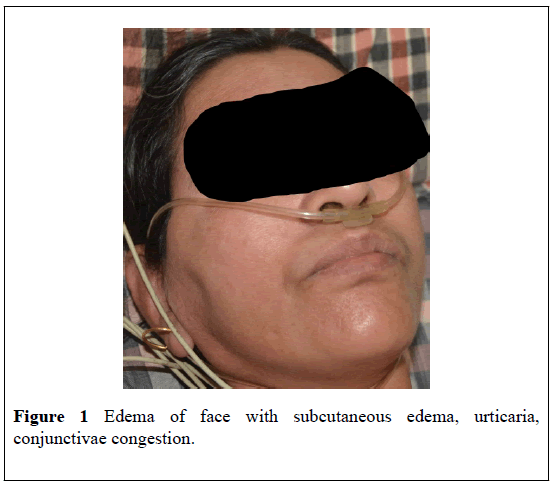 With us, she was given a head low position, nasal oxygen at 4 liters per minute and intravenous crystalloid solution @ 20 ml/kg over one hour followed by 15 ml/per hour over the next two hours, followed by 10ml/kg for the next four hours. Intravenous methyl prednisolone 1000 mg in 250 ml of normal saline over 60 minutes was administered along with 45.5 mg chlorphenaramine maleate by slow intravenous route. Her blood pressure and pulse rate gradually improved to 114/64 and 88 per minute. Extremities became warm. She had passed 580 ml urine in the last 6 hours. Urticaria, conjunctivae congestions, edema of body reduced at the end of 9 hours (Figure 2). Details of improvement of pulse, blood pressures etc… are shown in figure (Figure 3). Patient felt comfortable. Edema of body and face reduced (Figure 2). 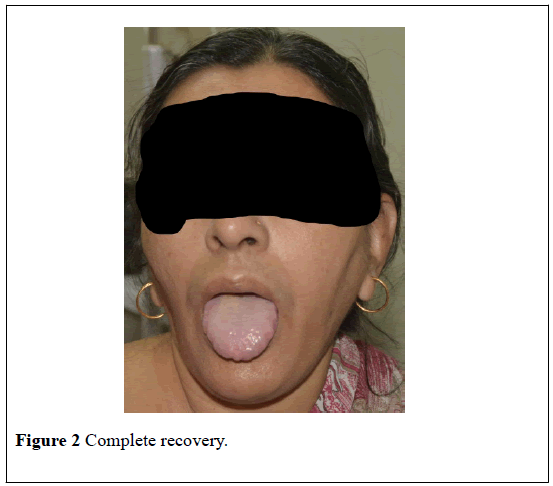 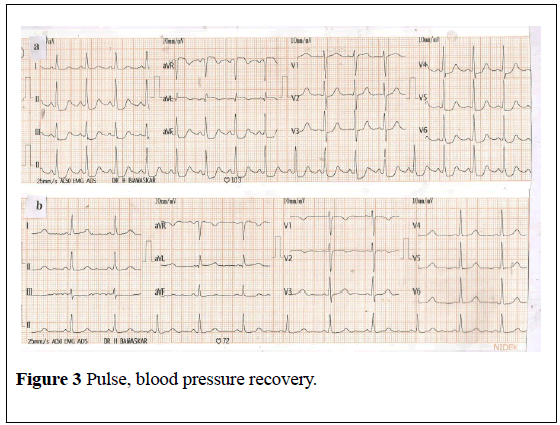 Electrocardiogram on admission showed a heart rate of 103 per minute, 4 mm ST segment depression in leads II,III,AVF, V3-V6, a small q wave, ST segment elevation and T wave inversion in AVL (Figure 4) suggestive of right coronary involvement. Subsequent ECG at the end of 8 hours of admission showed that ST segments returned to normal with a heart rate of 71 beats per minute Figure (Figure 4). 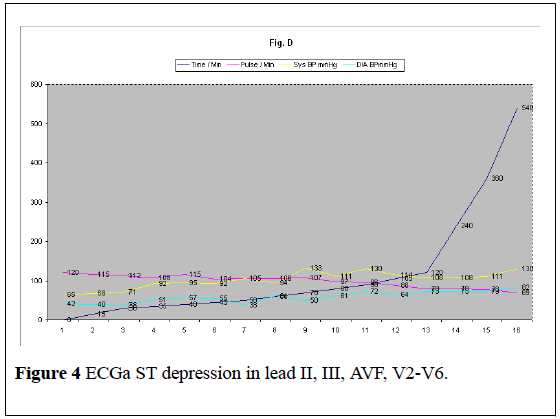 Her hemoglobin was 10.1 gms/dl, white cells count was 8400 per cu mm, platelets 232000/cu.mm, random blood sugar 171.6 mg/dl, liver function and renal functions tests were normal. Serum IgE was 386.53 IU/ml (normal 3-188 IU/ml). Troponin T test was negative and other cardiac enzymes were within normal limits. Lastly she was seen on 23/6/2017 with no complaints and a normal blood pressure and ECG. Patient and relatives denied for sensitivity skin chest or oral challenge for available proton pump inhibitors (PPIs).

H2 receptor antagonists (cimetidine and ranitine) and Proton pump inhibitor like omeprazole, esomeprozole, rabeprazole, lansoprozole and pantoprozole, are commonly used medications for the treatment of acid peptic disease and gastro esophageal reflux disease. The five PPIs don’t share the same chemical structure; hence indicate that a person who is allergic to one PPI might tolerate other PPIs. However cross reactivity of PPIs, have been found that people allergic to omeprazole are frequently allergic to pantoprozole and vice versa [1,2]. PPI’s have been reported to cause an immunoglobulin (IgE) hypersensitivity reaction [3]. IgE plays an important role in the development of severe anaphylaxis to PPIs, as in the present case [3].

Kounis syndrome is characterized by hypersensitivity coronary disorder to various environmental exposures, drugs and PPIs. Vasospastic allergic angina, allergic myocardial infarction and stent thrombosis with an occulting thrombus, infiltrated by eosinophils and histamine liberation by recruited mast cells are all features of Kounis syndrome [4]. In 1998, Brunwald E categorized allergic angina due to allergic reactions with mediators such as histamines or leukotriens acting on the vascular smooth muscles that can induce a vasospastic angina [5]. Kounis syndrome is caused by inflammatory mediators such as histamine, platelet-activating factor, archidonic acid products, neutral proteases, a variety of cytokines and chemokines released during the allergic process [4].

Three variants of kounis syndrome have been described [4]. The present case describes a type I variant which includes normal or nearly normal coronaries without any predisposing factors for coronary artery disease in whom the acute liberated inflammatory mediators can induce a coronary spasm with ST depression (Figure 4) without increase of cardiac enzymes and tropinin. Complete recovery of ST-T changes confirmed that changes were secondary to the allergic reaction to PPI. Kounis syndrome type I variant responds to intravenous methyl prednisolone. We avoided epinephrine; which is the drug of choice in anaphylaxis, because in Kounis syndrome it can aggravate ischemia and worsen the coronary vasospasm. However epinephrine action is blunted in this case as the patient is taking beta-blocker [4]. In the present case IgE induced anaphylaxis was evoked by oral pantaprazole. Kounis syndrome type II is characterized by the rupture or erosion of the existing coronary plug resulting in acute myocardial infarction. Type III includes stent thrombosis with re-infraction [4]. In a histopathology study, the victim died of kounis syndrome where the Coronary artery intima, media and adventitia were infiltrated by eosinophils and mast cells [4].

PPI’s are common routinely prescribed drugs, which are easily available even without prescriptions. Though rarely they evoke life threatening anaphylaxis, health professionals need to be aware of this possibility. However an oral challenge, performed under medical supervision, should be performed with non-cross reacting PPIs to ensure that it is safety tolerated.

We are grateful to Dr Punishi Parekh Resident in pediatric KEM and G.S. Medical College Mumbai for editing the case report.