The skin is the outermost organ of the body, requiring it to respond to daily environmental changes in order to maintain inner homeostasis. It is well reported that the biological clock system is a key regulator, responsible for synchronizing numerous metabolic, physiological, and behavioral processes with the 24 h daily environmental cycle (Figure 1) [1]. The molecular core of the biological clock system is expressed not only as a master clock localized in the hypothalamic suprachiasmatic nucleus (SCN), but also as peripheral clocks in various organs, including the skin [2,3].

Gozu and Haze [4] recently reported in the Journal of Japanese Cosmetic Science Society on the daily fluctuation of the skin vascular function relating genes using culture skin cells. In this report, they first established the skin cell culture system, which is available for investigations into the circadian rhythm of gene expression changes associated with vascular function. Clock genes were synchronized by use of dexamethasone, and the fluctuation pattern of PERIOD 1 (PER1) and ARNTL was used as an index of circadian rhythm. PER1 is the clock gene expressed in the daytime, while ARNTL is expressed at night; thus, the circadian timing of target genes can be predicted based on their similarity with the expression timing of these clock genes. 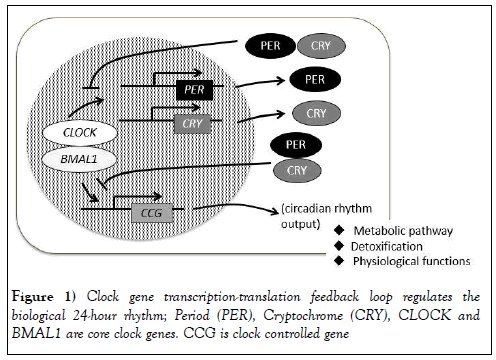 The importance of the circadian rhythm in the context of pharmaceutical treatment is well known. Recently, clinical studies have been reported where the therapeutic efficacy was improved by optimization of dosage timing based on the timing of symptom onset or phase modulation of biological rhythm [5]. These therapeutic strategies are called “chronotherapy”. Vascular functions, such as blood pressure, blood flow, and heart rate show daily variation, and cardiovascular disease also shows circadian onset timing; thus, a chronotherapeutic approach to cardiovascular disease has been put forward.