Peripheral vascular thrombo-embolism and the role of various fogarty arterial thrombo-embolectomy catheters: A comparative prospective study and its result

Introduction: Acute embolism and thrombosis are the commonest cause of peripheral vascular occlusion. Acute ischemic rest pain is the common mode of presentation in an emergency department. Majority of vascular thromboembolism are presented in late stage. Usage of Fogarty arterial embolectomy catheter results in incomplete thromboembolectomy and the poor chance of revascularization. It leads to a greater chance of amputation and mortality. Usage of Fogarty adherent clot catheter with Fogarty arterial embolectomy catheter has an advantage. It does not only improve the rate of better revascularization but also salvage the limbs and reduces the mortality.

Results: It is proven that usage of Fogarty adherent clot catheter along with Fogarty arterial embolectomy catheter in thromboembolectomy, results in better peripheral limb revascularization.

Conclusion: Regardless of the time of the presentation, use of Fogarty adherent clot catheter with Fogarty arterial embolectomy catheter has the better outcome.

Thrombo-embolism is the commonest cause of critical limb ischemia worldwide. They are responsible for the major disabilities and death due to septic gangrene. Acute vascular embolism and thrombosis have different underlying pathophysiology, treatment and outcome. The result of treatment depends on the time of presentation and conditions of the organs affected [1].

Majority of the source of embolism is due to the atrial fibrillation caused by ischemic heart disease and rheumatic heart disease [2,3]. The in-situ thrombosis caused by ulcerated atherosclerotic plaque, hypercoagulable state, vascular stenosis, dehydration, trauma and previous vascular bypass surgery [4].

Historically open incomplete thromboembolectomy was associated with higher incidence of amputation and deaths. The invention of Balloon Fogarty catheter and its further modification lead to a decreased incidence of amputation and deaths [6]. No single device offers complete extraction of primary and secondary embolus to achieve total revascularization. Catheters selection is based on cause, source and composition of the thrombus. The rate of revascularization dictated by the type of catheters due to the varied tensile strength of balloons and wires to extract thrombo-embolus [7].

It is a prospective study comprising 200 patients, suffering from limb ischemia due to vascular thromboembolism.

Patients with limb ischemia due to thromboembolism, who were symptomatic for 3 months or less included in the study. They have been evaluated for the causes, co-morbidities and conditions of the limb at the time of presentation. The severity of the limb ischemia assessed as per Rutherford classification [8]. Diagnosis confirmed by vascular Doppler study and C T angiogram. Patients who were asymptomatic, thrombosis over 3 months, vascular trauma, peripheral vascular disease and critically ill excluded from the study. 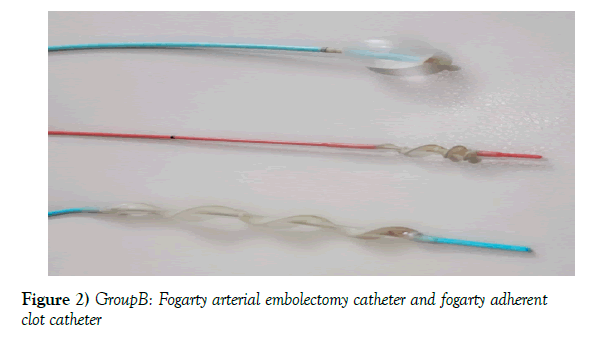 Groups A and B evaluated to compare device efficiency based on the complete extraction of thrombus, revascularization, relief of pain, limb salvage, mortality and the complications.

Majority of the procedure was done under local anaesthesia. Injection heparin 5000 IU, bolus dose given, 3 minutes before clamping vessels. The technique of thromboembolectomy followed based on the group. Post-op patients put on injection Heparin infusion, 20 units per kg body weight per hour, till PT/INR optimised by oral anticoagulants. Activated clotting time (ACT) done twice a day, to maintain between 180 to 250. The peripheral pulse recorded by a palpatory method and Doppler probe.

Patients were assessed by vascular Doppler study of the operated limb to evaluate the extent of the revascularization. 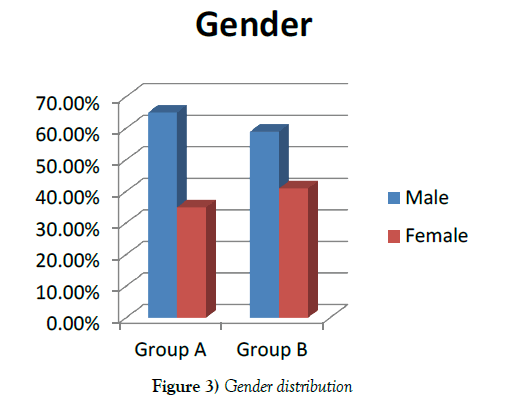 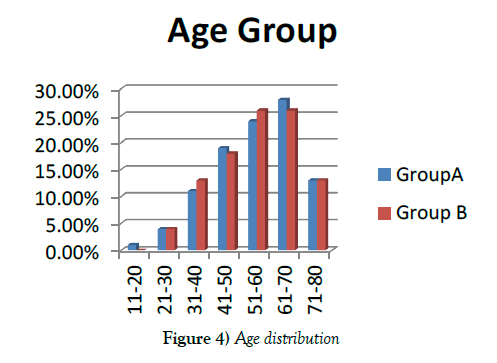 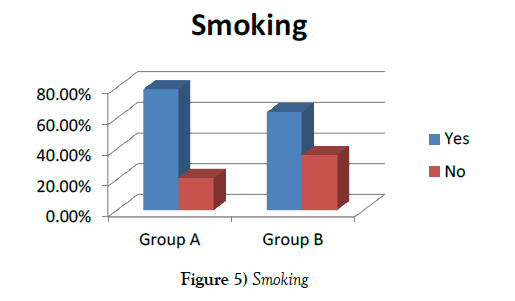 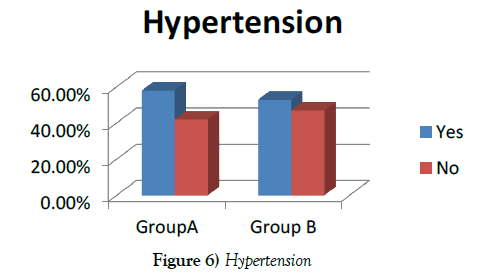 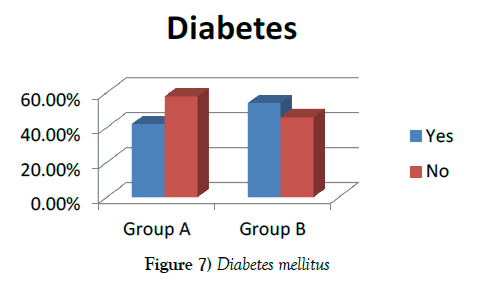 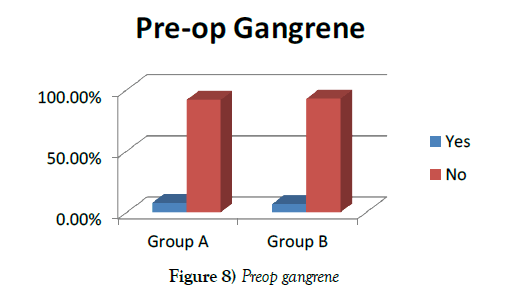 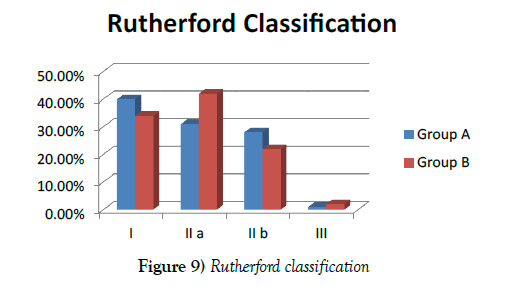 Minor device-related complications found. Group A had two dissections (2%), one haematoma (1%), and one embolization of ruptured bit of balloon (1%). In group B one perforation (1%), three haematoma (3%) and one vascular avulsion (1%).

Postoperatively, eight group A (8%) and two group B (2%) cases had to undergo re-embolectomy for persisting pain and thrombosis of vessels. Post thromboembolectomy, in group A, four below knee amputation (4%), four forefoot amputation (4%) and two toe disarticulations (2%) compared to group B, one below knee amputation (1%) and two toe disarticulation (2%) done, which is a significant finding (p-value 0.05). Three group A (3%) and one group B (1%) patient died due to progressive septicaemia. 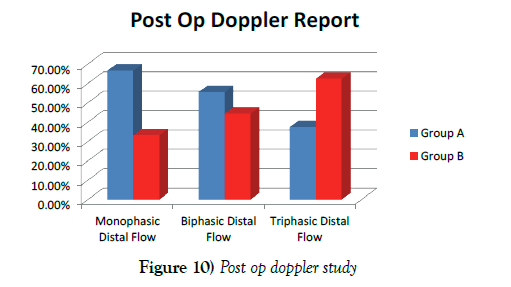 Cardiac source of embolism and vascular in situ thrombosis are the commonest cause of ischemia leading to disability and mortality. Thromboembolism frequently found in peripheral limbs. The incidence of upper limb ischemia and gangrene less compared to lower limbs due to collaterals [9]. Extent and severity of ischemia dictate the outcome of treatment. The high rate of mortality found in acute arterial ischemia due to the release of toxins from the affected limb [10]. The goal of intervention to re-establish circulation, restoring pulses, pain relief and salvage the limb.

The incidence of chronic arterial thromboembolism unusual but not rare. Early detection and appropriate management either thromboembolectomy or bypass surgery salvage the limbs [11]. In-situ thrombosis due to prothrombotic endothelium caused by hyperhomocysteinaemia or ulcerated atherosclerotic plaque [12]. Ulcerative plaque can induce blue toe syndrome due to the shower of crystal cholesterol microembolization. It can also put life and limbs in danger in case of larger embolization. Proximal major vessel embolectomy required to save the life of patients and distal vessel embolectomy required to save limbs [13].

Options for treatment of the thromboembolism based on cause, time of presentation and severity of limb ischemia. Treatment with Intravenous anticoagulation, catheter-directed thrombolysis, thromboembolectomy by Fogarty catheters and bypass surgery used [14,15].

In selected patients, thrombolysis has a successful role [16]. Emergency dissolving thromboemoblism guarantees the limb salvage and prevents mortality [17]. Catheter-directed thrombolysis has been tried in various studies. It showed, dissolution of embolus in 70%, 80% symptoms free and 80% limbs salvaged. Infusion of thrombolytic agent for 24 hours or more showed better results. The major drawback is the significant incidence of cerebral haemorrhage and embolic stroke [18].

Pre Fogarty arterial embolectomy catheter era, Procedure of thromboembolectomy was cumbersome and time-consuming. Majority of the cases were needed multiple arteriotomies in multiple sites of vessel walls. High incidence of incomplete thromboembolectomy with progressive ischemia terminated into either amputation or death. Innovating newer techniques and devices for thromboembolectomy worked in few and most remained unsuccessful [19-21].

Dr Thomas Fogarty invented Fogarty arterial embolectomy catheter in 1963 and presented a paper in 1965, about his experience. Fogarty catheter embolectomy becomes minimally invasive, the fast technique does complete or near complete embolectomy, re-establishing the circulation. It leads to dramatic reduction in the incidence of amputation and death [22]. Recent studies have shown, simple Fogarty arterial embolectomy catheter, useful in the selective group of patients. Successful in less 50% of cases and remaining 50% of cases would require other forms of percutaneous catheter intervention or bypass surgery [23]. Simple embolectomy enables extraction of the thromboembolic load if presented at an early stage as long as vessels are not diseased [24]. The option of delayed thromboembolectomy has a definitive role in establishing vascularisation with gratifying results. This avoids surgical bypass and related complications [25].

The incidence of in-situ thrombosis has been increased in native vessels and prosthetic grafts. The technique of percutaneous aspiration of thrombus useful in selective patients [26]. Primary success of aspiration is about 60% and secondary technical success is 96% [27].

The hydrodynamic device is made and used for fragmentation of the thrombus followed by aspiration in selective patients [29]. The hydrodynamic catheter has two lumens, can be used to shred the thrombotic material and aspirated by venture effect simultaneously [30]. Mechanical devices can also be used for complete or partial recanalisation of vessels [31]. Amplatz device is one such a promising option. It helps faster and safe recanalisation of peripheral chronic thromboembolic occlusion of arteries [32].

Nature of consistency of embolus and thrombus varied with an underlying cause and duration of occlusion [35]. Mere usage of Fogarty balloon arterial embolectomy catheter remains inadequate in a majority of the cases, who presents after 72 hours. Such embolus gradually get organises with the intima of a vessel as primary embolus with neo secondary embolus formed proximal and distal to it due to stasis of blood. It is difficult to extract organised thromboembolism with simple Fogarty arterial embolectomy catheter. This is true and evidently seen on our postoperative Doppler study. Secondary embolus remains fragile and unstable, it’s likely chances of migration into the distal smaller vessels are very high. Its clearance by antegrade and retrograde embolectomy dictates completeness of revascularization.

Fogarty arterial embolectomy balloon catheters, inflation volume and pull force has its limitations. Beyond a limit, likely chance of rupture of the balloon is high, if tried for an adherent or organized thromboembolectomy. It is advocated for simple embolectomy in acute embolism preferably lesser than 72 hours. It should not be used for fibrous or adherent thrombus [36]. Acute embolism and presentation of such cases within 72 hours, rare in the Indian scenario. Majority of symptomatic cases presented to us after week or more.

Fogarty adherent clot catheter flexible, made of polyvinyl chloride surrounding stainless steel spring body. It has a handle to modulate spiral cable diameter as per requirement. Device easy to negotiate through organised, even sometimes calcified thrombus and able to clear occlusion. It enhances results of complete revascularization [37]. This unique characteristic of adherent clot catheter helped us to extract maximum embolism and got better revascularisation results. It has reduced number of amputations and deaths.

All types of Fogarty thromboembolectomy catheters and its modified percutaneous devices are an indispensable collection in the armamentarium of thromboembolectomy. Catheters are simple, safe and easy to use. Immensely helped to salvaged millions of limbs and life. Device-related complications were minor and rare. Complications in the form of vessel dissection, perforation, haematoma, rupture and avulsion of vessels found [38]. Majority of the complications treated conservatively. In one of the cases, popliteal artery got avulsed, during usage of adherent clot catheter. Reanastomose of the vessel done uneventfully. Amount of traction and recoiling diameter of adherent clot catheter has to be controlled, based on the quality and diameter of the vessels.

It’s safe and easy to use Fogarty adherent clot catheter with the minimum learning curve. No serious complications found if used with appropriate precautions.

The authors declared no potential conflicts of interest with respect to the research, authorship, and/or publication of this article.

The authors received no financial support for the research, authorship, and/ or publication of this article.