This work explains the strategies for better understanding of the difference between conventional solid oxide fuel cell (SOFC) and electrolyte-layer free fuel cell (EFFC). Based on the devices performance conditions, it can be explained how both of the technologies are working in the same way while the internal mechanisms could be different. Mainly, this work will show the structural differences between the two devices.

On one hand, energy is the top most challenge to the world for the next several decades. On the other hand, energy technologies producing pollution and causing global warming have compelled the policy makers and funding agencies to focus on environment friendly energy technologies. Among targeted renewable energy technologies, fuel cell is the environment friendly device to provide green energy for domestic and automotive applications. Typically, a fuel cell has the similar structure of a battery. Technically, it consists of three components anode, electrolyte and cathode. Electrodes (anode and the cathode) should be catalytically active components for oxidation and reduction reactions respectively whereas electrolyte sandwiched between the electrodes is the key component for ion transportation to complete the redox reactions. Solid oxide fuel cell (SOFC) is more attractive type among different kinds of fuel cell (e.g., proton exchange membrane fuel cell, phosphoric acid fuel cell, alkaline fuel cell etc.) because of its many advantages including fuel flexibility (with a capacity of using renewable and nonrenewable fuels) and the use of non-noble materials for the electrode functions [1-3].

As electrolyte is the core component in the cell, which defines different types of the fuel cell. If electrolyte in the cell is a material with solid oxide properties, the type is known as solid oxide fuel cell (SOFC). Both electrodes are non-noble materials, anode plays the role for oxidation of the fuel provided and cathode plays the role of oxygen reduction. Solid oxide electrolyte sandwiched between the electrodes allows the ions transportation and blocks the electrons leakage through it during the fuel cell operation whereas electrons can pass through the external circuit if provided giving the output power. With this combination of the components, SOFC is a fuel flexible device with a capacity to use renewable (Hydrogen, ethanol, methanol, biogas etc.) as well as nonrenewable (fossil fuels including gasoline, natural gas etc.) fuels. A conventional fuel cell operates at high temperatures (800-1000⁰C) due to the typical yttrium stabilized zirconia electrolyte. However, the conventional SOFC due to high operating temperatures faces challenges relating to materials degradation, limited materials selection, high operating and capital costs etc. [4-7]. For many decades, scientists have been trying to reduce the thickness of the electrolyte in order to minimize the power losses; this effort initiated the use of thin film technology in the field. In this situation, lowering the SOFC working temperature is the major goal for last two decades to make it practically possible for commercialization. Low temperature SOFC can work in a temperature range of 300-600°C. However, the materials with sufficient ionic conductivity and the appropriate electrode catalytic activity at low temperatures are highly demanded. In our recent research, conventional SOFC has been found still complicated due to the presence of electrolyte layer. In case of using this layer, there are compatibility issues between anode and electrolyte as well as between electrolyte and cathode. Similarly, there are mechanical issues related to the presence of physical barriers among electrolyte and the electrodes in the cell.

Recently, a breakthrough technology called electrolyte-layer free fuel cell (EFFC) also called semiconductor-ionic fuel cell has been invented which has shown great characteristics to meet the challenges working at low temperatures [8-11] in an environmentally friendly way. These EFFC fuel cells are fabricated using single component (three in one) material whereas conventional fuel cells are fabricated using three components (anode, electrolyte and cathode) assembly. Single component consists of a homogeneous mixture of a semiconductor material and an ionic material where both material particles exist in particular ratio [12]. A simplest EFFC device is made of a uniformly compacted layer of the single component (three in one). In this device, there are no specific anode, electrolyte and cathode. Therefore, all functions (of electrodes and electrolyte in case of conventional technology) take place in single component (three in one) [13]. The side exposed to fuel, acts as anode and the region where oxidation reaction takes place is termed as anode zone. Similarly, the side exposed to air (Oxygen), acts as cathode and the region where reduction of oxygen takes place is termed as cathode zone [14,15]. There is always some free region between the two mentioned zones, which acts as the electrolyte zone. However, this device physically has no any electrolyte layer. Due to the removal of the electrolyte layer, physical barriers are no more existing in the device, hence reducing the power losses. Practically, it has been observed in our experiments that fuel cell performance in case of EFFC is better than the conventional technology whereas, EFFC fabrication and device handling is much easier than conventional fuel cell. Difference between both of the devices is shown in Figure 1. 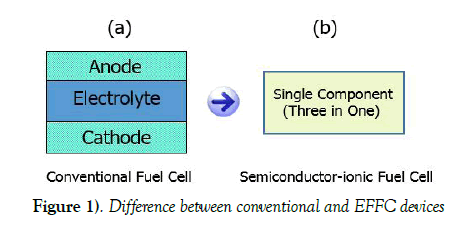