A case of a giant left ventricular pseudoaneurysm

Cardiac pseudoaneurysm is a rare but potentially lethal complication of myocardial infarction. Clinical manifestations may be nonspecific or, in some cases, may even be silent. Therefore, high clinical suspicion should be maintained when a patient becomes unstable after a myocardial event. Efficient use of imaging examinations is crucial in providing an accurate diagnosis and, thereafter, timely and appropriate treatment. The authors report a case involving a giant left ventricular pseudoaneurysm that required both transthoracic echocardiography and magnetic resonance imaging to reach the correct diagnosis. The pathology, clinical presentation, diagnostic work-up and treatments of cardiac pseudoaneurysms are reviewed.

A 74-year-old man was brought to the emergency department at the authors’ institution for severe chest pain that began 30 min before his arrival. His work-up suggested an acute myocardial infarction (MI) of the inferior territory. Cardiac catheterization demonstrated an occlusion of the middle segment of the right coronary artery, which was successfully dilated without any immediate complications. Four hours later, the patient became unstable and complained of pleuritic chest pain.

On transthoracic echocardiography (TTE), the right ventricle was not clearly identified. A large, heterogeneous and polylobulated mass measuring 7 cm × 13 cm was noted on the right side of the heart (Figure 1A). It was not possible at the time to determine whether the mass was intraventricular or extrapericardial. With contrast injection, there was heterogeneous enhancement of the mass (Figure 1B).

Figure 1: images of a transthoracic echocardiography. A The right cardiac chambers are not identified and are compressed by a large heterogeneous structure (arrowheads) representing a large and partially thrombosed pseudoaneurysm. B After contrast injection, the circulating portion (arrows) of the pseudoaneurysm is enhanced. LV Left ventricle

Several hours later, cardiac magnetic resonance imaging (MRI) demonstrated a large pseudoaneurysm on the posteroinferior segment of the heart measuring 7.0 cm × 11.4 cm × 6.0 cm. A narrow collar measuring 8 mm was identified on the inferolateral portion of the left midventricle. Approximately 50% of the pseudoaneurysm was thrombosed, with the circulating portion measuring 4.3 cm × 7.2 cm × 2.2 cm (Figure 2). There was a transmural late gadolinium enhancement near the neck of the pseudoaneurysm, confirming infarction. The right ventricle and the inferoanterior portion of the right atrium were partially compressed. A left ventricle pseudoaneurysm was diagnosed. 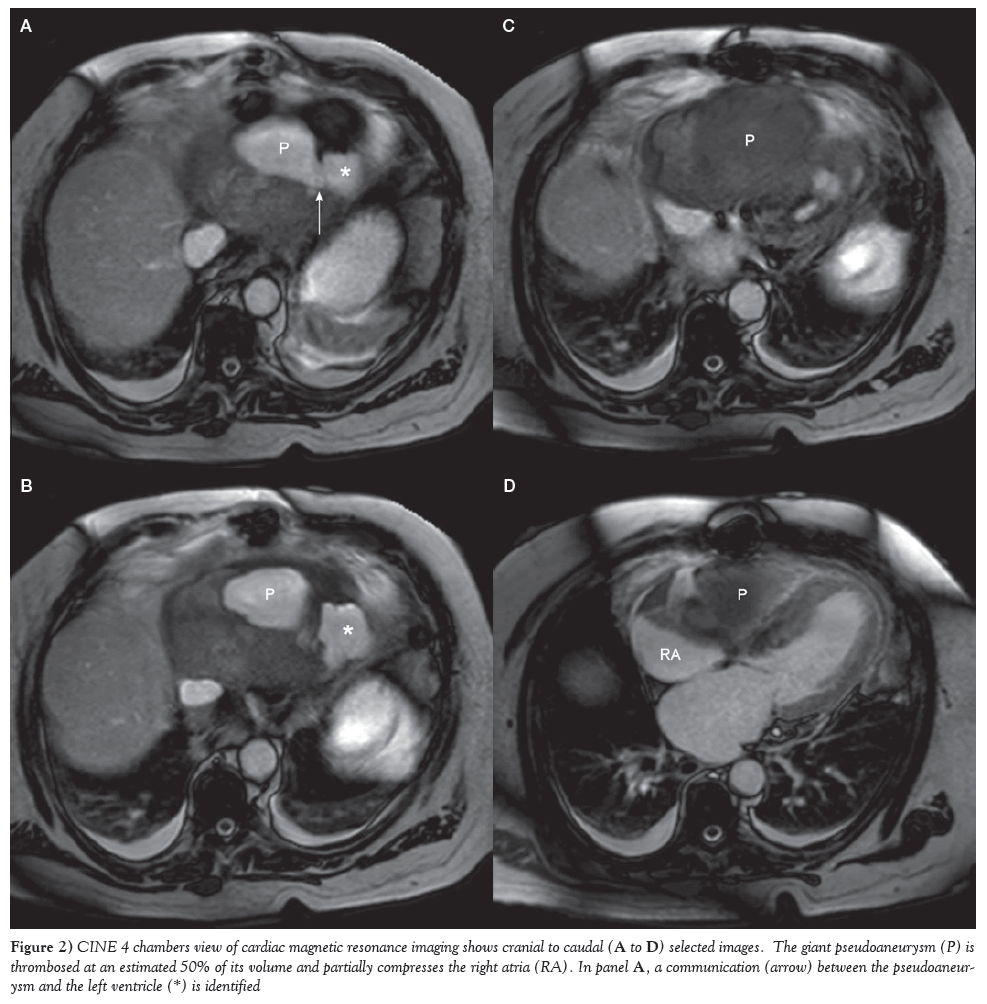 Figure 2: CINE 4 chambers view of cardiac magnetic resonance imaging shows cranial to caudal (A to D) selected images. The giant pseudoaneurysm (P) is thrombosed at an estimated 50% of its volume and partially compresses the right atria (RA). In panel A, a communication (arrow) between the pseudoaneurysm and the left ventricle (*) is identified

After discussing the situation with the patient and considering his multiple morbidities, surgical intervention was withheld. The patient was pronounced dead <48 h later. On autopsy, a rupture point was identified on the inferolateral wall of the left ventricle (Figure 3). As observed on imaging, the posterior pericardium wall was under tension by a complex fresh thrombus estimated to weigh approximately 250 g. It was also confirmed that the pseudoaneurysm partially compressed the right heart chambers. Figure 3: A rupture point was identified on the infero-lateral wall of the left ventricle (arrow). There is slight discoloration on each side of the rupture point, suggesting an acute myocardial infarction. The posterior wall of the right ventricle (RV) is slightly misshapen due to the mass effect produced by the pseudoaneurysm

Cardiac pseudoaneurysms occur when there is rupture of the free wall of the left ventricle. Extraventricular blood is then contained by adherent pericardium or scar tissue. Unlike true aneurysms, both the endocardium and the myocardium are damaged. Pseudoaneurysms occur in 4% of MIs (1). Other less common causes include cardiac surgery, trauma and infection. Typically, pseudoaneurysms are located in the posterior or lateral portion of the left ventricle (2). However, it has been hypothesized that anterior pseudoaneurysm more often lead to rupture and are, therefore, rarely identified (2).

Clinically, patients may present with nonspecific chest pain and dyspnea. However, in nearly 50% of cases, pseudoaneurysms may remain asymptomatic (3). On heart auscultation, pericardial friction rub and decreased heart sounds may be noted. Electrocardiography will show persistent ST elevation at the site of infarction.

TTE, although rapid and accessible, is diagnostic for left ventricular pseudoaneurysm in only 26% of cases (2). Occasionally, it may detect a discontinuity of the ventricular wall with blood flow outside of the ventricle. Typically, Doppler will show bidirectional flow in and out of the pseudoaneurysm. Ultrasonography may also demonstrate the narrow neck of the pseudoaneurysm with a ratio of the maximum diameter of the orifice to the maximum internal diameter of the cavity of the sac between 0.25 and 0.50 (4). This is in contrast to true aneurysms, which have ratios >0.90.

Conventional angiography, transesophageal echocardiography and cardiac computed tomography are alternative imaging modalities that may provide the diagnosis. However, cardiac MRI is considered to be the best imaging modality to assess pseudoaneurym if available and if the patient’s condition allows it (4). It offers better visualization and measurements of the pseudoaneurysm and its neck. As can be expected, there are also findings consistent with MI, including late gadolinium enhancement and akinesia or dyskinesia in the territory of cardiac necrosis. The presence of thrombus in the pseudoaneurysm, valve function and ventricular ejection fraction are more easily evaluated with MRI and provide additional information that may guide clinical decisions.

Because this entity is relatively uncommon, there have been no randomized controlled trials for the appropriate management of left ventricular pseudoaneurysms. If untreated, they are associated with a 30% to 45% risk of rupture and represent 23% of fatal complications of MI (1). Several cases of chronic ventricular pseudoaneurysms and some cases of conservative treatment of pseudoneurysms with good outcome have been reported (3,5). However, a review of recent literature suggests that more aggressive treatment should be considered for large or acute ventricular pseudoaneurysm appearing within three months of MI, especially if located in the anterior or lateral wall, and for patients with arrhythmia or recurrent embolisms due to the pseudoaneurysm (3,6). Surgical intervention aims to restore vascularization at sites of ischemia and to reduce the size of the left ventricle. An emergent and less invasive treatment option now includes percutaneous closure of the pseudoaneurysm, which may be more appropriate for high-risk surgical candidates (7).

Ventricular pseudoaneurysms are rare and difficult to diagnose clinically because symptoms are often nonspecific or absent. The interpretation of images provided by TTE can be confusing, especially in atypical cases such as in our patient with a large pseudoaneurysm. Clinical suspicion must remain high in this setting, particularly in post-MI patients. Further imaging, ideally cardiac MRI, can provide the correct diagnosis and additional information that may aid in the selection of the appropriate treatment.

The authors have no conflict of interests to disclose.