We would like to present a case report of laparoscopic right trisectionectomy with caudate lobe resection. Up to our knowledge, is the first case to be done laparoscopically. This is a 27 years old female who is not known to have any medical illnesses. Her past surgical history was only significant for a breast augmentation. She was found incidentally to have a huge central liver mass on ultrasound.

We would like to present a case report of laparoscopic right trisectionectomy with caudate lobe resection. Up to our knowledge, is the first case to be done laparoscopically.

This is a 27-year-old female who is not known to have any medical illnesses. Her past surgical history was only significant for a breast augmentation. She was found incidentally to have a huge central liver mass on ultrasound.

MRI liver was done to further characterize this lesion; the liver did not show any cirrhotic features. There was a heterogeneous hypervascular mass of about 10 cm involving S4 and the right liver. It contained fatty component and hemorrhagic necrosis. Inferior vena cava, right hepatic vein, right and left portal vein were patent. Diffusion restriction was positive single portocaval lymph node enlargement. No distinct focal lesions in other solid organs. There was a small amount of ascites. No pronounced focal lesions in lung and bone were found. The patient underwent laparoscopic right tri segmentectomy utilizing our previously published technique [1]. In a lithotomy French position, 5 ports were inserted (infra-umbilical for scope, two 12 mm ports for the operator in the right anterior axillary line and on the medial clavicular line, two 5 mm for assistants in the upper midline and left upper). Utilizing a 3D flexible laparoscopy camera, abdominal cavity exploration revealed no evidence of extrahepatic disease. Hilar dissection utilizing the Glissonian approach was done dissecting the right and middle Glissonian pedicles which were clamped temporally. The demarcation line was visualized showing a hypertrophied left lateral lobe that is estimated to be adequate for the patient size. Liver transaction using ultrasonic device was carried on to the right of left hepatic fissure, with the utilization of Pringles maneuver for 15 minutes, followed by restoration of flow for 5 minutes. After completion of the hepatic transection, using hemolocks inflow was controlled, and hepatic outflow division was achieved using endo-GIA staplers. Routine Hemostatic sealant application and anti-adhesive barrier was applied. A Jackson-Pratt drain was inserted in surgical bed. The resected liver was then removed via a Pfannenstiel incision in an endopouch. Fascial closure was done, skin was closed by subcuticular sutures, and dermabond was applied (Figure 2). 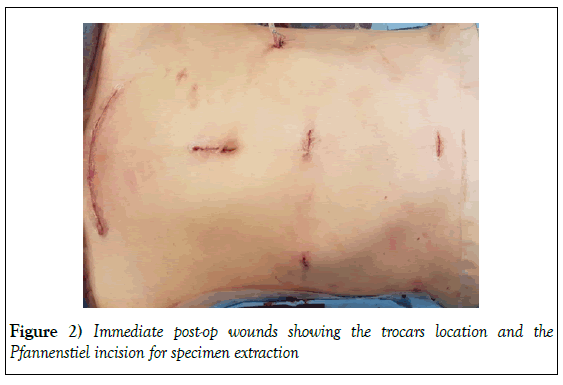 Total operative time was 3 hours. No intraoperative blood transfusion was required. The patient tolerated the procedure well and was extubated and transferred to post-operative recovery.

Regarding her postoperative course, the patent developed bouts of melena. She underwent an upper gastrointestinal scope, which was negative. She required two units of blood transfusion and developed an increase in her total bilirubin with an obstructed pattern. A computed tomography scan of her abdomen showed a well regenerating remnant liver, with a dilated left hepatic bile duct down to the bifurcation. (Figure 3) A therapeutic ERCP was done; this showed a normal common bile duct, with a possible benign stricture at the bifurcation. An ERCP stent was placed, and the patient’s condition improved immediately. The drain was removed on day 5 post op and the patient was good to be discharged home. The patient was seen in the clinic and was doing well; she was satisfied with the cosmetic outcome of the surgery. With the recent advances in laparoscopic surgical technology devices and experience in both laparoscopic and liver surgery. Laparoscopic liver surgery is shown to be associated with lower intraoperative blood loss, post-operative pain and wound complication [2,3].on top of that it has a superior cosmetic outcome when compared to traditional open liver surgery. Added to that the technical intraoperative advantages of magnified views and angulated vision that is achieved by the modern flexible scopes. The main disadvantage would be longer operating time and steep learning curve. These disadvantages can be overcome in experienced high volume centers by team approach and standardized technique. Laparoscopic extended liver resection was described and performed in multiple case series [4]. However, up to our knowledge, this is the first case to include a caudate resection along with right trisectionectomy. The difficulties in caudate lobe resection originated from the difficulty to control the hepatocaval veins originating from the caudate and entering the IVC via the laparoscopic approach. Our center established enough experience through laparoscopic living donor liver surgery, which made such resection achievable in 3 hours of operative time with no need to intraoperative blood transfusion.

The technical points that facilitate these resections would be adequate mobilization of the hepatic attachments to prevent any intraoperative postural hypotension secondary to IVC compression and utilization of less traumatic ultrasonic devices around the IVC with a lift like technique utilizing suction tip. We are reporting this case aiming to prove the feasibility of laparoscopic surgery in liver resection in centers with adequate experience.