Kidney transplantation is one of the mainstay therapies in chronic kidney disease. It is vital for a surgeon to know anatomy of the retroperitoneum to perform successful kidney transplantations. Inferior vena cava (IVC), traversing through the retroperitoneum, is the primarily responsible vascular structure for blood return of the lower extremities, pelvis and abdomen to the heart. In laparoscopic donor nephrectomy it is vital to know anatomy of IVC and its relations with neighboring structures. In this paper we represent a rare representation of IVC, a duplicated inferior vena cava (DIVC) case in a donor nephrectomy. Furthermore in this paper, management and possible embryological background of this unique variation is also being discussed.

In human anatomy, Inferior Vena Cava (IVC) is located retroperitoneally and composes of two common iliac veins, renal veins, right gonadal vein and three hepatic veins. It traverses the abdomen retroperitoneally draining entire abdomen except alimentary canal and crosses the diaphragm at T8 level. When retroperitoneum is the surgical field, it is vital to know IVC and its possible anatomical relationships with other structures to perform safe surgeries. Here in this paper, we represent a patient who underwent laparoscopic, hand assisted donor nephrectomy and presented with duplicated IVC (DIVC) which was detected in routine preoperative radiological work-up and resulted in discussions during the procedure. Furthermore in this paper the embryological background of this variation will also be discussed.

A sixty year-old male patient was a candidate for hand assisted laparoscopic donor nephrectomy, after clinical evaluation he was found appropriate and pre-operative work-up was started. In his abdominal CT, left and right common iliac veins did not join as IVC as usual but they continued themselves as two separate vena cava (Figures 1 and 2). After they are joined by renal veins and gonadal veins on both sides (Figure 3), left IVC joined the right IVC at the hepatic hilus level via a venous trunk which traveled over abdominal aorta (Figure 4). 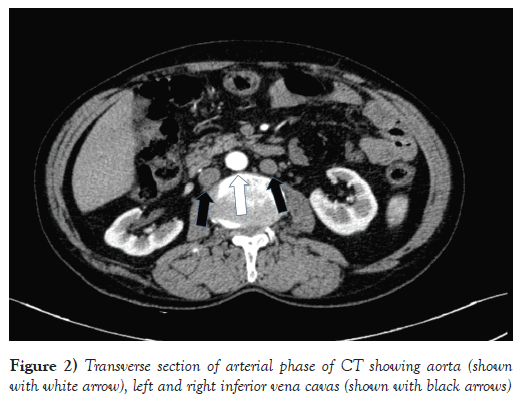 The patient was positioned in right lateral decubitus position allowing surgical team to place laparoscopic trocars through right epigastric region and right lumbar region. Furthermore a mini Pfannenstiel incision was made for the hand port After all ports were placed, intra-abdominal adhesions such as colons attachments to the anterior abdominal wall due to previous surgeries and traumas were cauterized, incised via energy device. The kidney was freed of its attachment to spleen, splenic flexure and descending colon. To allow identification of the left renal vein, left gonadal vein was found and cauterized by energy device and left ureter was isolated. After this step, proximal and distal parts of the left inferior vena cava and regarding shortness of left renal vein were observed. Left IVC was traversing over left psoas muscle and abdominal aorta, furthermore continuing towards portal hilus confluencing with right IVC. Furthermore, kidney was freed from medial attachments to further expose renavascular structures. After isolation of renal vasculature, surgical stapler was used to excise renal artery and vein. Left ureter was distally tied and excised.

Left kidney was moved to the bench table and perfused by using University of Wisconsin solution. Pre-renal and para-renal fat were excised and vasculature supplying these tissues were tied. After all back table preparations were finished; the graft was placed in a mesh and delivered to the recipient’s operation room.

As a result of this caval variation, the graft had a shorter left renal vein, the usual anatomical advantage of choosing left kidney for transplantation due length of the left renal vein became obsolete. However, after discussion of where to anastomose the left renal vein, the final decision was not different from the routine site which was external iliac veins. Both patients had uneventful post-operative period and were discharged with full health.

Kidney transplantation is a complex surgical operation requiring upmost anatomical knowledge of retroperitoneum and vasculature. IVC and aorta are the main structures traversing through the retroperitoneum while draining and supplying all the intra-abdominal and pelvic organs. It is vital to know anatomy and embryology of IVC and its tributaries. In the literature there are cases of DIVC reported, however most of them are incidental or discovered during cadaveric dissections. Unlike other reports, our case was intra-operatively discovered and could have changed the course of action.

DIVC has a prevalence of % 0.2-3 [3] and slightly more frequent in males. Although the exact etiology behind is largely unclear, it is believed that this variation is a result of persistence of veins forming the IVC on both sides including the proximal portion of vitelline vein and sub- and supracardinal veins [4,5]. DIVC is usually asymptomatic, however due to variation in venous drainage there can be risk of embolism which could be prevented by using caval filter [6]. Furthermore, DVIC has increased importance in retroperitoneal surgeries and cardiopulmonary surgeries, the surgeon should be aware of this variation to prevent life-threatening hemorrhages and complications [7-10].

Careful study of routine radiological work-up such as CT or MRI usually suffices in defining these kind of variations. However CT is usually preferred over MRI due to cost-effectiveness, speed and lesser contraindications. Although usage of the Doppler ultrasonography is reported, which has higher inter-user variations and has less validity in overweight patients. Despite of all these advanced preoperative radiological work-up the surgeon should always stay vigilant during the operation.