Like any other country, Iran is jeopardized by many environmental hazard threats and such threats can culminate in environmental disasters with tremendous repercussions such as loss of people’s lives, destruction of national assets, disruption of man-made building, dangers threatening mass population, etc. To stand against this, approaches in hazard management are after finding more pragmatic solution for these repercussions. Moreover, these hazards are associated with desertification, tectonic, cycles of aridity and surface processes associated with wind and water erosion. This paper provides information on the threats and vulnerability imposed on Zayandeh- Roud Basin (Z.R.B, hereafter) in Iran. For this aim, assessment was carried out by overlaying hazards map, human variable, and adaptation capacity map. Results are in the form of classification vulnerability map with 5 levels: Very Low, Low, Threshold Level, High Resilience and Very High Resilience. Based on vulnerability map, most of the Northern, Eastern and North Western parts of Z.R.B were among the most vulnerable parts. Vulnerability on the central parts of Z.R.B took two forms of ‘very low’ and ‘low’ which were because of most adaptive capacity.

Vulnerability mapping assessment is a very important tool in risk analysis, especially in a multi-hazard region. The end product of this powerful tool is a spatial pattern account (including temporal surface change) of not a single hazard threat, but the one which is considered as a spatial-temporal database of the integrated nature of a multi-hazard threat in many regions of the world. This spatial- temporal database can be digital stored or produce maps. Spatial-temporal analysis of the data bases would have revealed a number of overarching features that are pertinent towards effective hazardthreat and risk reduction strategies. These overarching spatial–temporal patterns described the integrative-composite nature of multi-hazard threats patterns in space and time. These include distribution symmetry, clustering, direction tendencies and randomness of distribution.

Vulnerability has been introduced as a function of exposure, sensitivity and adaptive capacity. Since in developing countries, controlling land use is a difficult and requires great sensitivity, a vulnerability assessment framework was designed by the United Nations’ Inter-Governmental Panel on Climate Change (IPCC) [1,2]. Due to the notion that Iran is a developing country, it has been constantly facing issues such as urban development and immigration, lack of resources and hazard threats. In this sense, one important issue which might prove very helpful to hazard management is identification of vulnerability areas. For instance, earthquake hazard map is used for assessing level of damage caused by earthquake in USA. This is because the vulnerability map provides information that can lead to reduction of the effects of disasters through safety and environmentally conscious management of land use [3-6].

In this regard, one disadvantage of the structural vulnerability is that it is capable of preventing the damages imposed on buildings. So, use can be made of the early/emergency warning by using the simple and advanced technology which leads to reduction of the casualties and damages noticeably. Proper warning, exchange of information and quick communication are required to be taken into account before and during emergencies in the first golden hours. On-time and early warnings can diminish negative effects of disasters.

In addition, Classification Hazard Map can be utilized as another efficient tool for the assessment and management of hazards [7-9]. Classified hazard makes it possible to detect critical areas with high risks exist. The maps are important for the management of decisions and planning such as prediction and prevention of desertification and the reclamation of degraded lands [10-13].

In the same vein, the necessity of Hazard Management Process is felt for assessing hazards, too. Hazard management can be carried out with the aim of identifying critical factors so as to find out vulnerable points or the hazards. Another advantage that classification hazard map can have is recognition of hot spot or critical centers of a hazard. This can prove very helpful since recognition of critical centers can help prevent hazards [14-18].

The present study, thus, was aimed at identifying a critical center of hazards and area(s) which are mostly vulnerable to hazard. For this aim, critical center of three hazards, namely desertification, earthquake and aridity have been identified. Vulnerable and adaptive areas have been illustrated in the form of classification map and findings are expected to be used by policy-maker of the basin [19-26].

Land use and urban activities in the Z.R.B. have increased noticeably during the last 5 decades. On the other hand, active threats in this area can alter the morphology and landscape of the zone, which can then affect human activities. So, recognition and evaluation of hazards would help one make better decisions with regard to management approach.

The Zayandeh-Roud Basin is located in the central part of Iran (Figure 1). The area of the basin is about 42,000 km2. The situation of this basin can also be seen on the map. As can be seen, there is more than one hazard in Z.R.B which is tectonic activities such as the earthquake, desertification and drought. On the other hand, human activities such as using land include land use, population and strategic situation especially in the largest city of the basin, Isfahan [27]. 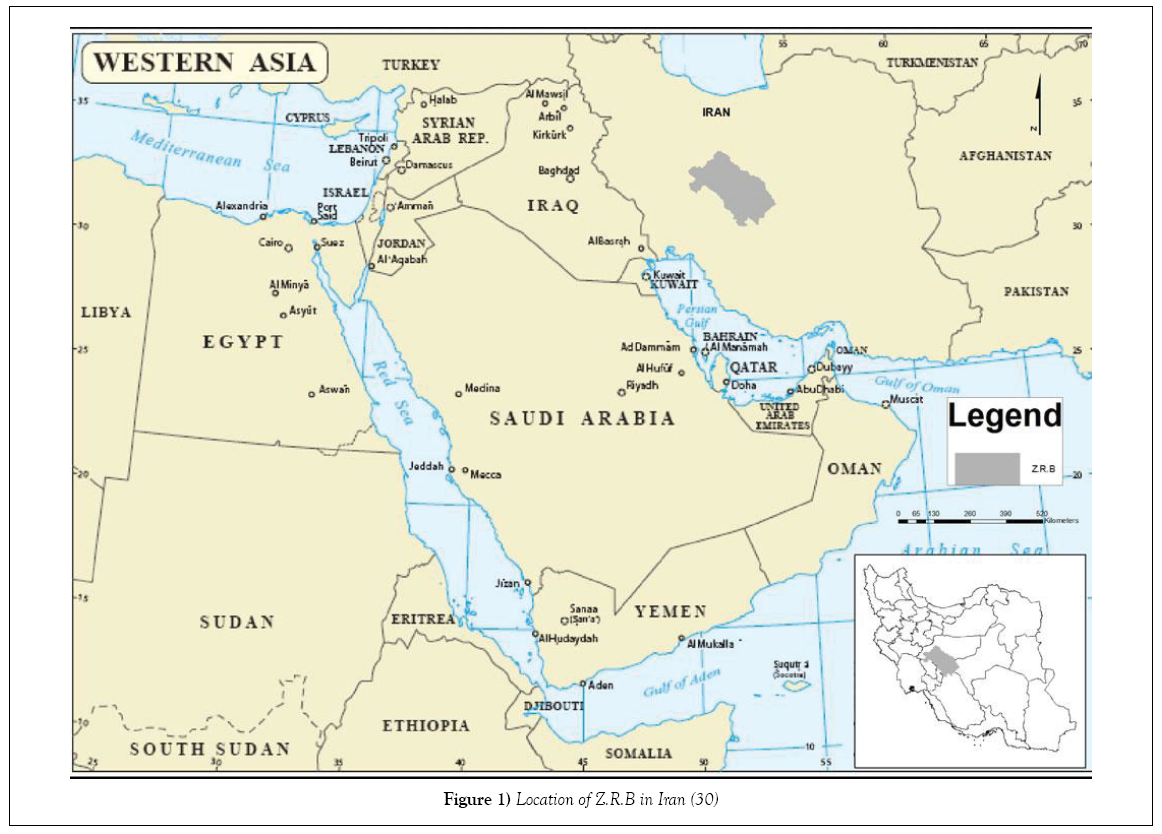 Growing population in Zayandeh-Roud Basin (Z.R.B) and growing the need for hazard management in the study area are the most important reasons for the application of risk analysis. In this study, risk hazard map will be provided for Z.R.B in Iran by using Arc map 10.1 Classification and composite methods were used to derive a composite hazard map of classified hazards map (Earthquake, desertification, Aridity and surface geomorphology) and human activities [26-31].

In order to extract hazard vulnerability index, the following steps were followed:

Using exposure information from historical records, the classification composite hazard map was obtained for three factors, namely desertification, earthquake and aridity hazards. Furthermore, human activities were classified for an easier recognition of the sensitivity to hazards exposure. The human variables were urban life, industry, and roads. The assumption here is that, given the same degree of exposure to hazards, an area with relatively less inhabited people is less vulnerable to hazards as compared to an area with higher population densities. What can have implied from this assumption is that distribution of humans in an area of land might add to its vulnerability to hazards. However, there are many different reasons for this which is not elaborated since they are out of the scope of the present study. Density of human variable is measured by the percentage of whole area in 10 km square grid. Finally, it is worth mentioning that Adaptive Capacity Index was constructed as a function of public areas, such as hospitals, schools, mosques and sport centers. Based on the above, an index of the overall hazards vulnerability was constructed. Figure 2 shows the steps of constructing the index [32-40].

Generating the Composite Maps for the Vulnerability Assessment

Figure 3 shows the overall hazard vulnerability index by overlaying a series of maps. Classification hazard maps in 10 km grid can also be seen for three different hazards, namely the frequency of desertification, earthquake and aridity. According to Yusuf and Francisco [41-50], composite map was made according to the following formula: In this study, weighted average of three standardized hazards was used and then all three hazards maps were overlaid onto a map with single-multiple hazard. This can be better observed in the following figure which illustrates the overall hazard map where three hazards of desertification, earthquake and aridity are combined.

Urban and industrial maps were obtained from the Organization of Natural Resources in Isfahan, Iran [51-55]. These maps show locations of human variables. In this study, the variables were measured per square kilometer in grid map. The maps are produced based on weighted average for each variable and then sum of the value for final classification map is calculated (Figure 4). 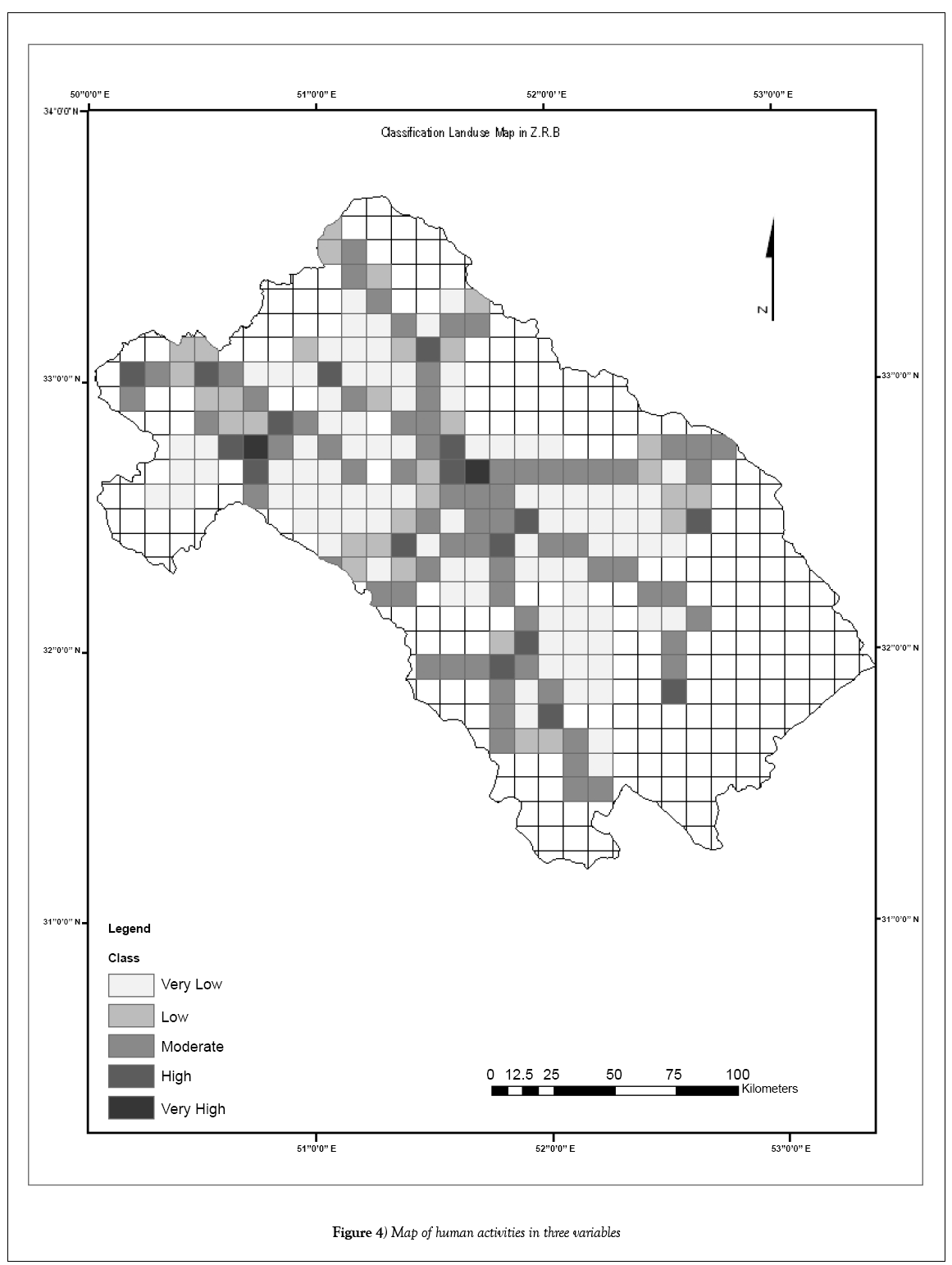 The overall classification hazard maps with human and adaptive maps were derived using the weighted average of the standardized values for each of the 10 km grid. These classes are used in Figure 3. You need to explain properly for reader before or immediately after Figure 3.

As can be seen in Figure 4, the center of area has the highest density of human activities. Southern parts of the area have relatively more protected areas compared to other parts. The largest protected areas are located in the center.

Several definitions have been proposed for Adaptive Capacity. For instance, it was defined by Yusuf and Francisco [56] as the degree to which adjustments in practices, processes or structures can moderate or offset potential damage or take advantage of opportunities. It can be written in equation form as follows: In this study, frequency of each of adaptation parameters were measured in 10 km grids. Then, classification and weighted were assigned to the various hazards (Figure 5). 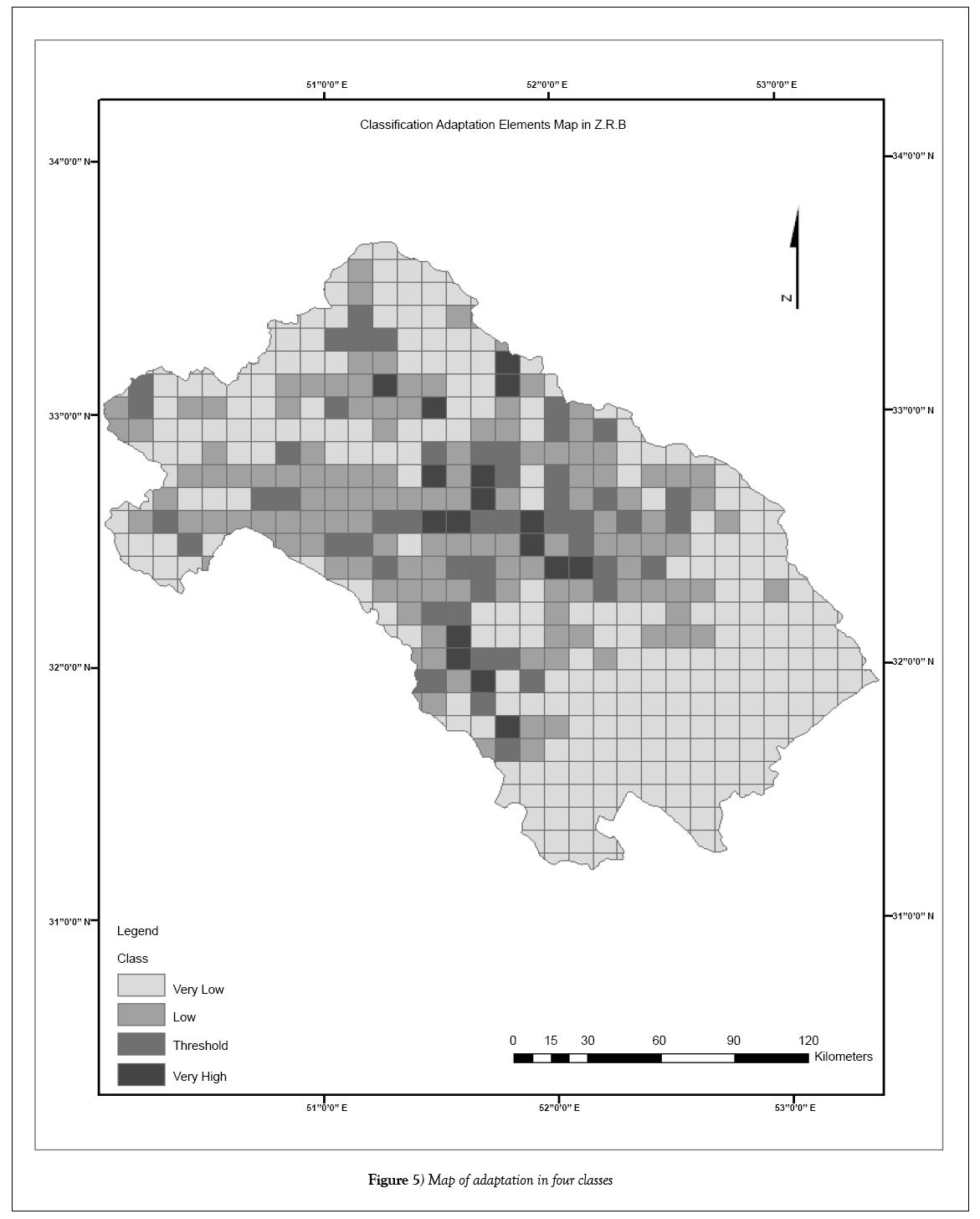 Variables of human activities are predictors of stresses which might add to the vulnerability of hazards. The present findings indicated that the most vulnerable areas were North, West and South-West parts. In some previous studies, the composite hazard map has been drawn for disasters such as tsunami, earthquake, flood, etc. (OCHA Regional Office for Asia Pacific, 2011; United Nations Office for the Coordination of Humanitarian Affairs Regional Office for Asia and the Pacific, 2011) [57]. However, in this research composite hazards maps included the classification of earthquakes, desertification and aridity hazards. Additionally, composite hazard maps were utilized to show the critical center of the hazards in Zayandeh-Roud Basin. Finally, identification of the critical center of hazards can be useful for hazard management and prevention of hazards. Figure 6: Shows the map of vulnerable areas in four classes

Vulnerability to the hazards is a threat to Z.R.B. This study can be a deemed as a pioneering step to understand the vulnerability and adaptive capacity of urban habitats to the hazard threats. Vulnerability of human activities is related to damages imposed on urban, industrial and roads within the area. When the hazards occur, houses, factories and roads are damaged. This study has highlighted the adaption ability with respect to hazards. In this study, adaptive measurement is different in that it incorporates locations and frequencies of places which can be of great help to humans during occurrence of hazards. Furthermore, this method would recognize situation of hazards, vulnerability and adaptive in micro-scale. This knowledge would be useful for further research made by geologists, engineers and management planners.