During routine anatomical dissections two cases of unusually structured abductor digiti minimi muscle were discovered. In the first case, the variant muscle body was composed of three well-defined portions: lateral, intermediate and medial. The three portions fused in a common muscular body that attached to the ulnar side of the base of the fifth proximal phalanx. In the second case, the aberrant muscle was composed of two portions: lateral and medial. Distally, they fused in a common muscular body that distally inserted as in previous case. Because in each one of the cases a portion from the aberrant muscle crossed over the ulnar nerve and artery in the Guyon’s canal, both variant abductor digiti minimi muscles could be of clinical interest in differential diagnosis of ulnar nerve entrapment.

At the wrist the ulnar nerve passes through a fibroosseous tunnel known as “Guyon’s canal” or “distal ulnar tunnel” [1]. The clinical importance of this tunnel is that it may become a site of ulnar nerve compression [1-8]. Variety of causes has been determined for such compression including trauma, lipoma, false aneurysm of the ulnar artery, ganglion cyst and rarely aberrant muscular slips [2,4,8-11].

This paper demonstrates a detailed description of two variant abductor digiti minimi muscles of the hand. The relationship of these muscles to the neurovascular bundle in Guyons’s canal may explain their possible association with ulnar nerve entrapment at the region of the wrist.

During routine anatomical dissections, two cases of unusually structured abductor digiti minimi muscle were discovered. The variant findings were observed in the left hypothenar regions a 41-year-old (Case 1) and 53-year-old (Case 2) Caucasian male cadavers. A careful dissection of these muscles was performed to determine their structure, including the attachment points and innervation.

The variant abductor digiti minimi was composed of three well-defined portions: lateral, intermediate and medial (Figure 1). The medial portion originated from the pisiform bone; the intermediate portion arose from canalthe fibers forming anteriorly the Guyon’s canal; the lateral portion, started from the middle of the medial part of the flexor retinaculum. The three portions fused in a common muscular body that attached to the ulnar side of the base of the fifth proximal phalanx. From clinical point of view, the most interesting portion was the intermediate one, which passed over the ulnar artery and nerve in the Guyon’s canal. 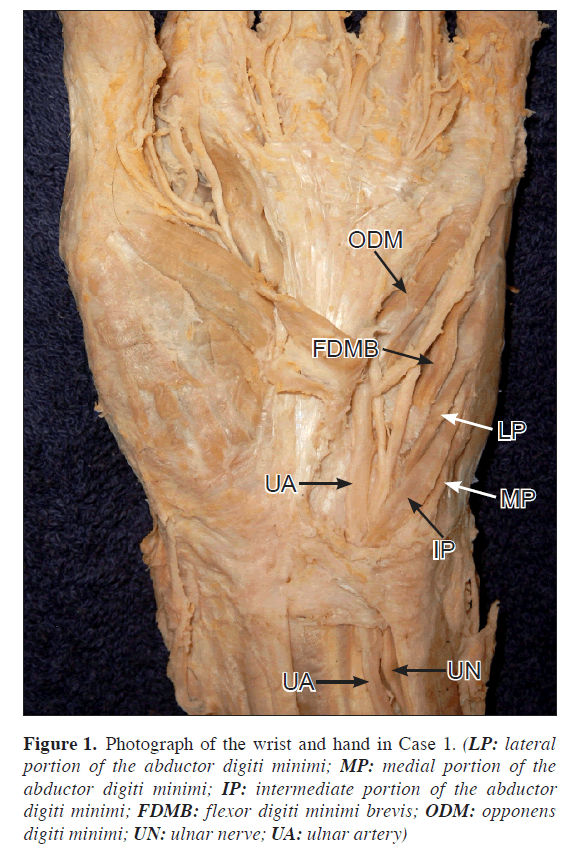 The body of the abductor digiti minimi was composed of two well-defined portions: lateral and medial (Figure 2). The medial portion originated from the pisiform bone; the lateral portion started from the upper part of the flexor retinaculum. The two portions fused in a common muscular body that attached to the ulnar side of the base of the fifth proximal phalanx, as in previous case. The lateral portion passed over the ulnar artery and nerve in the Guyon’s canal. Therefore, this one could be of interest by clinicians. 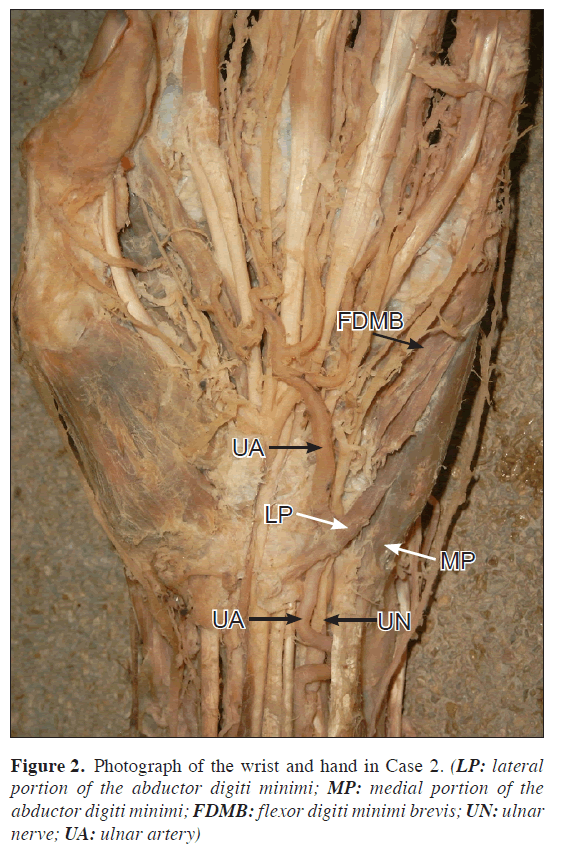 The innervation of the variant abductor digiti minimi muscles was from the ulnar nerve. The division and course of the ulnar artery was as usual.

The Guyon’s canal extends from the palmar carpal ligament at the proximal edge of the pisiform bone to the hamulus of the hamate bone, a distance of approximately 4 cm [12]. Usually, the ulnar nerve and artery pass through the canal, which otherwise contains fat only [1]. According to De Smeth, all structures narrowing the distal ulnar tunnel or occupying some space within this tunnel could cause compression neuropathy of the ulnar nerve [3]. An anomalous hypothenar muscle in Guyon’s canal is considered to be one of the causes of ulnar tunnel syndrome [2-5]. In this report we present two cases of variant abductor digiti minimi muscles, reducing the space in the distal ulnar tunnel, as a predisposing factor to ulnar nerve compression.

Anomalous muscles in Guyon’s canal are common [10]. The variations of the abductor digiti minimi are the most frequently described among the hypothenar muscles [9,10]. Georgiev et al. summarized different variants of this muscle: absence, origins from the fascia of the forearm, palmaris longus, fascia of the flexor carpi radialis, intermuscular fascia, flexor carpi ulnaris and flexor retinaculum, second head, three origins, fusion with the flexor digiti minimi brevis and present a case of a deep abductor-flexor of the little finger [9].

In clinical practice anomalous muscle may present as a mass at the wrist that is initially diagnosed as a ganglion or lipoma [13]. However, rarely some variations belonging to abductor digiti minimi may lead to serious complaints in certain professional groups [11]. Symptoms of weakness, intrinsic muscle wasting, and sensory loss are believed to result from ulnar nerve compression in the confined space of Guyon’s canal [11]. Turner and Caird explained the nerve entrapment with some provoking factors, such as injury, muscle hypertrophy or repetitive minor trauma [14]. However, Harvie et al., disagree with this theory and supposed that the symptomatology correlates with muscle size, which is probably genetically predetermined [10]. There are ulnar nerve compression syndromes provoked by anomalous muscles [2,6-8,11]. Additionally to nerve compression, an aberrant muscle may be also associated with thrombosis of the ulnar artery [15]. In the cases of ulnar nerve and artery compression, ultrasound imaging and/or MRI could be used as imaging modalities that clearly identify the variant muscle in Guyon’s canal [1,6,10].