Many studies have described various congenital anomalies of liver like agenesis or hypoplasia of its lobes, or absence of its segments. Comprehensive knowledge about the differentiation of segments and their abnormalities is essential for successful modern surgeries on hepatobiliary system. An unusual anatomical variation of liver was found during dissection of an adult male cadaver in an undergraduate medical students’ class. The quadrate lobe was completely absent. There was no accompanying anomaly. Fissure for ligamentum teres and ligamentum venosum were normally placed with respect to each other. Awareness of variations of the lobes and fissures of liver is of immense importance for surgeons and clinicians and will help in preventing confusion in radiological as well as surgical diagnosis. The variation in the present study is being reported to alert the clinicians and surgeons about the various abnormalities in appearance of liver.

Liver is the largest of abdominal viscera occupying most of the right hypochondrium and epigastrium and also extending considerably into the left hypochondrium till the left lateral line. It is generally wedge shaped and weighs 2% of total body weight (size and weight varying with sex, age and body size). Liver is generally considered to be anatomically divided into right and left lobes by the reflection of falciform ligament on the anterior surface, fissure for ligamentum teres inferiorly and posterior surface by the ligamentum venosum. Both caudate and quadrate lobes are considered to be part of anatomical right lobe. The quadrate lobe lies on the inferior surface of liver between the ligamentum teres and fossa for gallbladder. In gross anatomical descriptions, it is considered to be a part of right lobe although functionally it is a separate entity.

The concept that liver is a segmental organ originated first from the study of Hjortsjo, which was further consolidated by Elias and Petty by plastic casts of ductal and vascular system stated the liver can be divided into functional subsegments each with its own ductal and venous system [1,2]. Currently, functional classification of liver is the Counaud’s division into eight functional segments based on distribution of portal venous branches and locations of veins in parenchyma. Comprehensive knowledge about the differentiation of segments and their abnormalities is essential for successful modern surgeries on hepatobiliary system.

The present study is reporting one such rare variant that should be in the knowledge of clinicians’ and surgeons.

An unusual variation of liver was observed during routine dissection of abdomen of a formalin fixed cadaver (Figure 1). Left lobe in general appeared to be small in size. Fissure for the ligamentum teres was in direct contact with the lateral edge of fossa for gallbladder (inferring that quadrate lobe was absent). Inferior border of liver measured 19 cm (between the two triangular ligaments) and the maximum transverse diameter was 14.5 cm. Dimensions of left and right lobe were 8.5x8 cm and 11x15.1 cm, respectively. Length of porta hepatis was 2.5 cm (smaller than normal; 5 cm). No other abnormality was seen in the porta hepatis, inferior vena cava, fissures for ligamentum venosum and ligamentum teres, and impressions of the viscera. There was hypertrophy of caudate lobe, its dimensions being 5.8x2.2 cm. 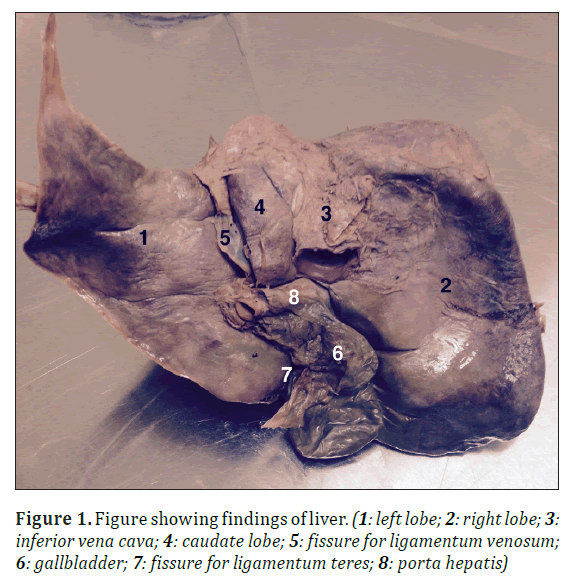 Congenital abnormalities of human liver are rare and correspond to developmental defects during embryogenesis [3]. Developmental anomalies of right lobe of liver were first reported by Heller in his study in 1870 [4]. Generally, it is associated with anatomical variations like hypertrophy of liver segments and variations in the position of gallbladder. Pages et al. classified these morphological anomalies as agenesis (absence of a lobe or a part of it), aplasia (one of the lobe is small and its structure is abnormal) or hypoplasia (one of the lobe is small but normal in structure) [5].

Embryologically, liver and biliary system arise from a ventral outgrowth (hepatic diverticulum) from distal part of foregut and grows into the ventral mesentery of gastrointestinal tract. Functionally, liver is essentially a segmental organ as has been seen and reported by Hjortsjo et al., Elias and Petty by studying the territorial distribution of hepatic duct, artery and portal vein [1,2]. The variations in development of organ correspond to variations in the distribution of liver territories [6].

A possibility of the presence of an abnormal liver has to be kept in mind while planning surgeries of abdomen. The knowledge about differentiation of segments is also essential. Inoue et al. suggested that agenesis or hypoplasia of right lobe might predispose the patient to portal hypertension and esophageal varices, especially when the left lobe is not enlarged perhaps due to reduction of intrahepatic branches of portal vein [8]. Anomalies of lobes of liver including agenesis are generally associated with anomalous positions of gallbladder, the knowledge of which is essential for planning surgeries like cholecystectomy. The entire quadrate lobe is a separate anatomical segment because of separate branches and ductuli of portal vein, hepatic artery and bile duct. Surgical knowledge of various lobar agenesis of liver is essential for planning of surgeries and appropriate identification of intraoperative surgical findings.

Knowledge of agenesis of lobes of liver is of immense clinical and surgical importance. Surgeons must recognize the entities like the absence of normal lobes or presence of accessory lobes of liver, which may lead to confusion during radiological and surgical diagnosis. Therefore, the findings of the present study may be of interest to surgeons and radiologists.