An uncommon variety of brachydactyly

A 65-year-old female patient presented with short, overlapping third and fourth toes. Middle and distal phalanges were short in upper toe and were absent in lower toe. Proximal phalanges of both toes were short and fused. These features did not match perfectly to any variety of brachydactyly.

The word brachydactyly is used to describe the hands and feet with shortened digits (brachy, meaning “short,” and daktylos, meaning “digit”) [1]. The digits themselves may be shorter than normal or they may appear small because of shortening of metacarpal and metatarsal bones in the hands or feet [1].

Most of the patients with brachydactyly do not require any specific treatment. When use of the hands is impaired, physiotherapy may improve their function. Corrective surgery can also be used to lengthen the hand or foot bones in some severe forms of brachydactyly. If brachydactyly is associated with other medical problems, such as hypertension, specific treatments for these problems may be indicated [1,2].

Isolated brachydactyly generally has an excellent prognosis except some cosmetic problems [3].

A 65-year-old female patient, 1.57 meter in height, presented with history of trauma to her right foot two days back. On examination it was found that the third and fourth toes were replaced by two short, asymmetrical toes overlapping each other although other toes were normal as usual. The upper toe was short but normal in appearance. The lower toe was relatively soft and larger than the upper one. Moreover eczematous lesion was seen in between them. Nails of all toes were also normal (Figure 1). Left foot and both hands showed normal appearance. Physical examination of the patient (including blood pressure) was absolutely normal. 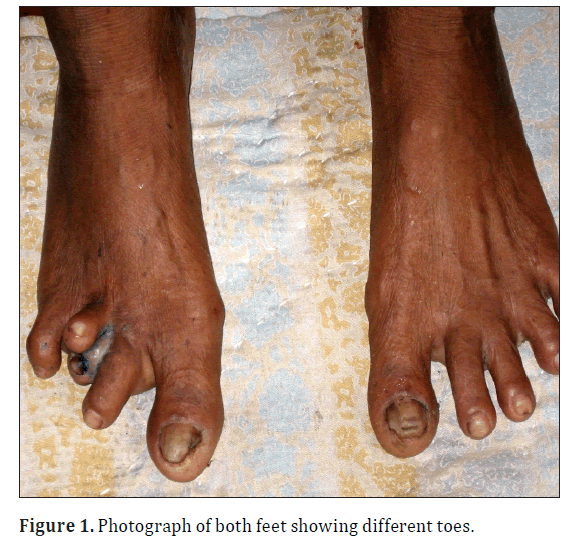 Her mother told that the deformity was developed gradually after an insect bite at around the age of 1.5 years. No hereditary history was found in two generations before and after. The patient was advised for radiogram of right foot;anteroposterior and oblique views for trauma. In radiographs, no obvious bony lesion in accordance with trauma was found. All tarsals, five metatarsals were normal but proximal phalanges of third and fourth toes were fused and this bony mass was articulated with the heads of both third and fourth metatarsals. Middle and distal phalanges were seen in the upper toe but both of them were much shorter than usual. In the lower toe middle and distal phalanges were completely absent and a soft tissue shadow was detected at that area. All other phalanges of other toes were also normal in appearance (Figure 2). Brachydactyly can involve any of the phalanges, metacarpals, and metatarsals in many different combinations. The shortening of these bones may range from mild to severe. Sometimes certain bones are completely absent. Shortening of the bones may occur in one, several or all of the digits. For a particular finger or toe, the entire digit may be short or only a particular phalanx may be underdeveloped. When brachydactyly involves the distal phalanges, the fingernails or toenails may be small or absent [1,2].

Brachydactyly can also occur with abnormalities of the hands and feet. When a phalanx is of unusual shape, the finger or toe may be bent to one side (clinodactyly). Sometimes the digits have webbing between them (syndactyly). The phalanges may also be fused together at their ends (symphalangism). This makes it difficult to bend a digit at the joint where the phalanges are fused [4,5].

Brachydactyly is often evident at birth, but may also develop or become more obvious during childhood which is in our case. Incidentally, brachydactyly is more common in females [2].

There are several classification systems used to describe these different types of brachydactyly. The system that is used most frequently was developed by Dr. Julia Bell in 1951 and is called the “Bell Classification” [6].

According to Bell’s classification, types A3 and D are the most common forms of brachydactyly, but their incidence vary widely between groups of people from different backgrounds [6].

In general the surgical treatment for brachydactyly gives excellent functional and cosmetic result. The functional outcome seems to be related to the stability of interphalengeal and metatarsophalengeal joints [2,3]. In most of the cases brachydactyly causes no significant functional disability except wearing of shoes in cases of affection of foot and so does not need any surgery as such. In the present case, upper toe is usually non-weight bearing and so can be utilized satisfactorily in reconstruction of any defect of toe with excellent cosmetic appearance.

Our sincere thanks to all people who helped and supported during writing of the manuscript. We would also like to thank the radiology technician, Mr. Nepal Bag who helped a lot to reach the person and also to take the radiographs.