An unusual bilateral variation of the splenius capitis muscle: A case report

A bilateral variation of splenius capitis muscle was identified in a formalinfixed 25-week-old male human fetus during routine dissections at Mersin University, Medicine Faculty, and Department Anatomy laboratory. The variation was an extra stripe muscle tissue mostly on the splenius capitis and had the same appearance and the course on the both sides. The variative muscles originated at the occipital bone and inserted into the fascia of serratus posterior superior muscle. On the downward course, they superficially passed splenius capitis and splenius cervicis then continued deep to the rhomboid minor muscle. Awareness of such variations would help clinicians identify the etiopathology of myofascial trigger points and tumor-mimicking lesions related to splenius capitis more precisely.

Splenius capitis muscle, located at the back of the neck, arises from the mastoid process and the rough surface on the occipital bone just below the lateral third of the superior nuchal line and inserts into the spinous processes and supraspinous ligaments of C7 to T3 [1]. Its function is extension and lateral flexion of the head and cervical spine [1]. Variations of neck muscles are rather uncommon, thus they are encountered during routine dissections and even rarer during clinical diagnosis [2]. In the literature, some variant muscles related to the neck are reported and referred with the names such as “cleido-occipitalis cervicalis muscle”, “rhombo-axoid muscle”, “rhomboideus capitis muscle”, “occipito-scapularis muscle”, “splenius capitis accessories muscle”, and “rhomboideus occipitalis muscle” [3-6]. In this case report, we would like to report a variative splenius capitis muscles, originating at the occipital bone and inserting to the serratus posterior superior muscle fascia, to attract the attention of clinicians and surgeons for definitive diagnoses of tumor mimicking lesions and myofascial trigger points.

Bilateral variations of splenius capitis muscle were identified in a 25-weekold male fetus, present in Mersin University Faculty of Medicine Anatomy Department (Figure 1). The cause of death of the fetus, which preserved in 10% formalin solution, was unknown. Courses and shapes of the muscles of the neck region were normal, but there was an additional thin muscle. This extra muscle originated at the occipital bone, close to the midpoint of the attachment of the splenius capitis muscle to the occipital bone. They laid superficial to the splenius capitis and the splenius cervicis muscles. They continued deep to the rhomboid minor muscle and then attached to the fascia of the serratus posterior superior muscle superiorly close to the attachment point of the rhomboid major muscle fibers (Figure 2). On the right side, the variant muscle length and width were 33.12 mm and 2.88 mm while on the left side were 38.41 mm and 2.65 mm, respectively. Additionally, these variant muscles were histologically evaluated. Tissue cross-sections in 10 μm thickness were obtained middle part of the variant muscles. They were stained with hematoxylin and eosin. In the longitudinal section, distinct transverse lines (striations) and numerous muscle fiber nuclei, which are characteristic of striated muscles, were observed (Figure 3). 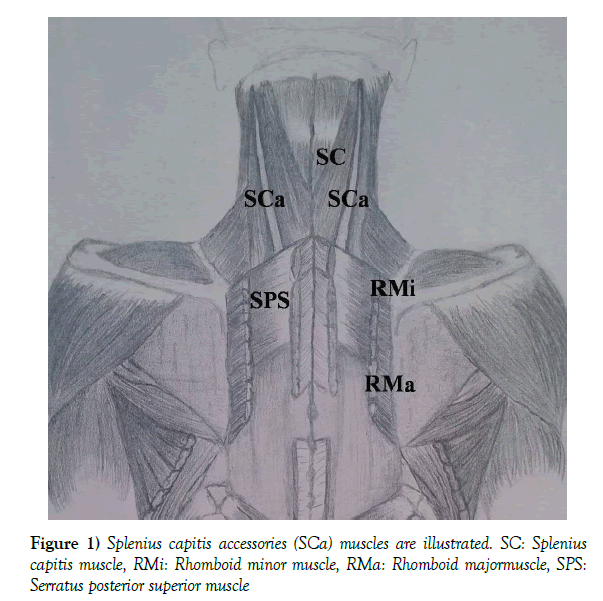 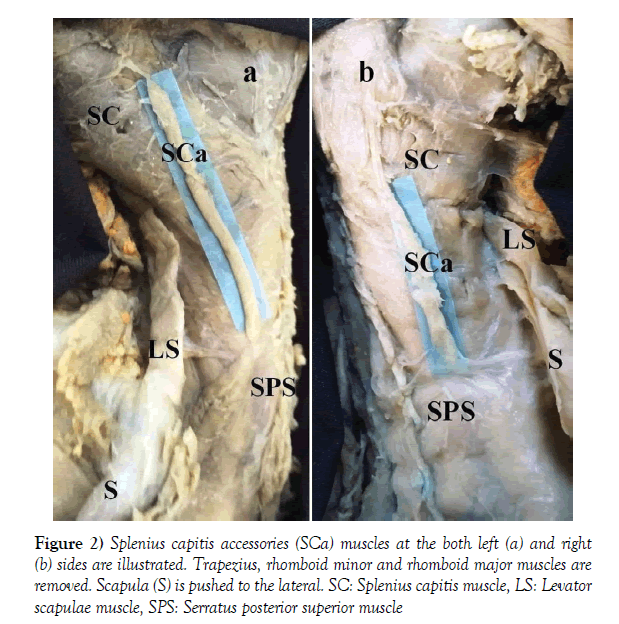 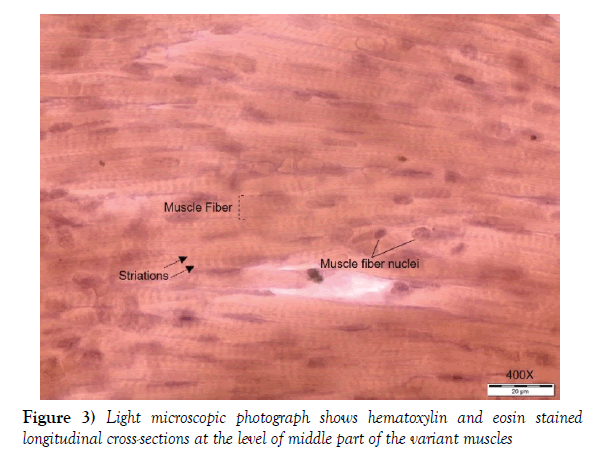 Reports regarding variations of splenius muscles are notably limited [3]. Muscular slips separated from the splenius muscles can attach to longissimus capitis and/or iliocostalis cervicis [3]. It was reported that the splenius capitis muscle can be divided into superior and inferior compartments or mastoid and occipital divisions of its origin [3]. In addition, complete absence of splenius capitis muscle was stated [1,3]. The case mentioned by Wood in 1870 [3] as a slip of splenius capitis muscle running deep to the cleido-occipitalis and rhomboid major muscles to attach to the fascia over the serratus posterior superior muscle is similar to ours. Unlike to ours, the slip seems to be originating as a part of the main splenius capitis, and then diverging from it inferiorly [3]. A variative muscle in the neck region was reported to attach at the spinous processes of C7 to T1 vertebrae and referred with the names such as “rhombo-atloid”, “rhombo-axoid”, “adjutor splenii”, “singularis splenius accessories”, “splenius capitis accessories” or “splenius colli accessories” [3]. Bergman et al. suggested the name “splenius capitis accessories”, in cases where the extra muscle tissue originates at occipital bone or mastoid process [3]. On the other hand, a variant muscle between scapula and occipital bone are reported in previous studies in which it was named as the occipito-scapularis, the rhomboideus-occipitalis or the rhomboideus capitis [3-6]. In this study the extra muscle fiber originating at occipital bone and inserting into the serratus posterior superior muscle, was named as “splenius capitis accessories muscle” in accordance to the previous studies [3-6].

Such variations pose importance regarding the clinical diagnoses and surgeries in the region [2,4-7]. One major clinical implication is these variations potentially taking part in myofascial trigger points [2]. Such variations also give rise to false diagnosis as tumor mimicking lesions [5,7]. In conclusion, this anatomic variation not encountered in the literature was thought to attract the attention of surgeons and clinicians because of its clinical significance.