Cognizance of lung anatomical variations is essential for surgeons performing lobectomies or segmentectomies. Knowledge of lung variations is essential; clinicians may misinterpret such variations in radiological images. During cadaveric dissection of fifty cadavers, we chose the three most unique lung anatomic variations noted to highlight as case studies. These three were an azygos lobe, a five-lobed right lung, and a markedly enlarged lingula of a left lung. The anatomical variations we describe in this article are of both clinical importance and academic interest. Cardiothoracic surgeons should consider these variants to avoid or reduce mortality associated with invasive procedures.

Surgeons must be aware of anatomical lung variations during lobar or segmental resections of the lung. Knowledge of such variations is essential to preclude misinterpretation of radiological images when such variations occur [1].

In normal lung anatomy, complete fissures divide the lungs into distinct lobes that connect only at the hilum of the lung. The left lung has the oblique fissure that separates its superior and inferior lobes. The right lung also contains an oblique fissure, in addition to a horizontal fissure in the superior lobe, which creates the third middle lobe. The oblique fissure begins at the level of the fourth thoracic vertebra in both the right and left lungs. It continues laterally in a downward direction along the costal surface of the sixth rib, extending anteriorly terminating just below the hilum. The horizontal fissure of the right lung follows the contour of the fourth rib. Each of the three lobes of the right lung contains specific tertiary bronchi. The superior lobe of the right lung consists of the apical, posterior, and anterior tertiary bronchi, the middle lobe consists of the lateral and medial tertiary bronchi, and the inferior lobe is made up of the superior, medialbasal, anterior-basal, lateral-basal, and posterior-basal tertiary bronchi.

The left lung also contains a structure associated with the superior lobe: the lingula. In Latin, lingula means “little tongue”. Embryologically, the lingula is the homologue of the right middle lobe [2]. It normally contains the superior and inferior lingular tertiary bronchi, while the apical-posterior and the anterior tertiary bronchi occur in the rest of the superior lobe and the superior, anteromedial, lateral basal, and posterior basal tertiary bronchi occur in the inferior lobe. The lingula is found just below the cardiac notch of the anterior portion of the superior lobe and is usually neither large nor very prominent. Pulmonary fissures result from retention of specific borders of the bronchopulmonary segments during embryological development. They are critical for facilitating lobar movement and uniform expansion during respiration [3].

Several studies found numerous variations in the fissure and lobar patterns of both lungs. Fissures can be complete, incomplete or absent altogether, affecting the number of lobes present in each lung [3-5]. These fissures and lobar variants occur as normal anatomical variations.

In this study, we assessed fifty cadavers for anatomical lung variations. The Maryland State Anatomy Board donated forty-four of these cadaveric specimens. The remaining six were private donations to the Anatomy Teaching Lab of the Uniformed Services University of the Health Sciences. Of the fifty cadavers, 26 were female and 24 were male, and range in age from 66 to 103 years old. We observed the fissure and lobar patterns in each cadaver. Twenty-six percent of the studied cadavers had incomplete and absent fissures, supernumerary lobes, variation in lobe size (enlarged lingula) and/or an azygos lobe. We noted the anatomical variations and highlighted the three most unique in this article (Table 1).

We observed the following three rare anatomical variations during dissection of the fifty cadaveric specimens: An azygos lobe, a five-lobed right lung, and a markedly enlarged lingula of a left lung.

An azygos lobe occurred in the right lung of a 94 year-old Hispanic female whose cause of death was listed as heart disease. The lung from apex to the inferior border measured 21 cm in length. The azygos lobe occurred at the apex of the right superior lobe. It was concave in shape, measured 9 cm in length, 3 cm in width at the superior (“meso-azygos” to lateral border) and inferior (inferomedial aspect to lateral border) portions and only 2 cm width in the middle of the lobe. The superior lobe measured 8 cm in width and 11 cm including the azygos lobe. The distance from the primary bronchus to the inferior edge of the azygos lobe was 2.75 cm (Figures 1a and 1b). 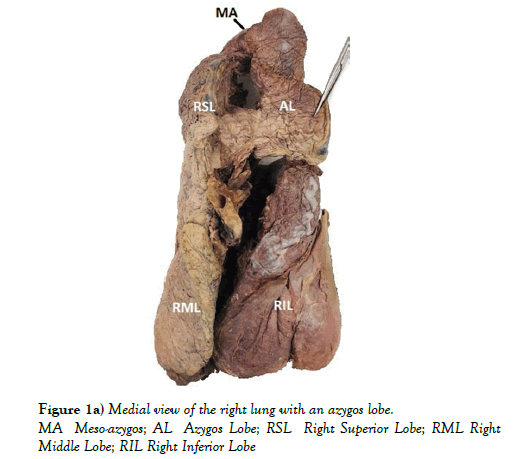 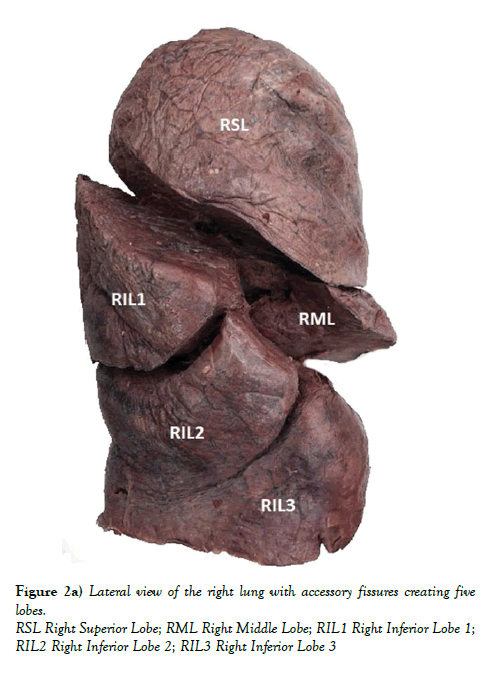 An enlarged or overdeveloped lingula occurred in the left lung of an 82 year-old White male whose cause of death was listed as heart disease. The lingula measured 8 cm in length from the beginning of the margin creating the protrusion. The superior lobe, which contained the enlarged lingula, measured 10 cm in width and 12 cm in height from the region at which the lingula emerged at the apex of the lobe (Figures 3a and 3b). Only the inferior lingular tertiary bronchus supplied the lingula. The superior lingular tertiary bronchus traveled laterally supplying the inferior aspect of the left superior lobe (Figure 3b). 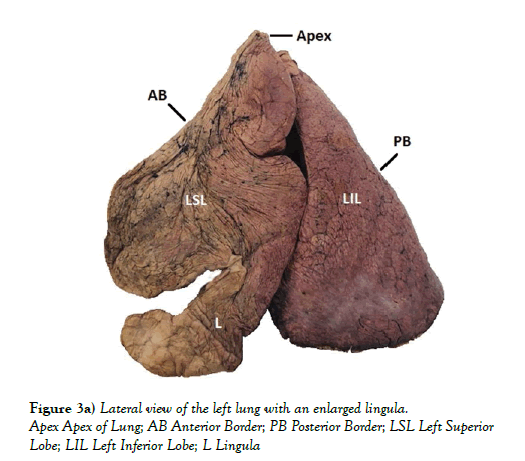 Quadros et al. [4] reported a five-lobed right lung found during a study of 36 right lungs (2.77% incidence rate). The lung displayed both incomplete oblique and horizontal fissures along with two accessory fissures; one occurring in the center of the inferior lobe and one separating a portion of the superior lobe, producing five separate lobes. George et al. [1] described additional cases of supernumerary lobes in 3 out of 65 right lungs (4.61%). Each contains four lobes separated by three fissures. Normally, such accessory fissures in the right lung result from the non-obliteration of the boundaries of certain bronchopulmonary segments during embryonic development. Each of the ten tertiary bronchi develops separately during early stages of embryogenesis. As development progresses, the boundaries of select bronchopulmonary segments obliterate and come together to form lobes of the right lung leaving the oblique and horizontal fissures unfused. When supernumerary lobes are present, obliteration of certain bronchopulmonary segments did not occur as expected, leaving additional fissures and lobes in the lungs. As in the case of the five-lobed lung, the supernumerary lobes are most likely the result of non-obliteration. When an azygos lobe is present, the formation of a fissure (meso-azygos), unrelated to the obliteration of the bronchopulmonary segments in the superior lobe, interrupts the tertiary bronchi of the superior lobe.

Although the lingula of the left lung is often described as the embryological homologue of the right middle lobe, it is not separated from the left superior lobe by any fissures nor is it normally of substantial size [2]. In similarity, the right middle lobe and the lingula of the left lung are each supplied by two tertiary bronchi. Also, these “embryological homologues” may share a predisposition to similar infections and anatomical complications, suggesting even more that the lingula is comparable to the right middle lobe [13]. Arguably, from an anatomical standpoint, the lingula of the left lung appears to be a forced protrusion due to the cardiac notch below the curved groove in the left superior lobe where the heart lies. In Case 3, the lingula has a clearly defined and a substantial separation between it and the left superior lobe, resulting in an 8 cm protrusion that may suggest an independent lobe with an incomplete fissure causing the separation.

Anatomical variations of the lungs are very common and are usually asymptomatic. Twenty-six percent of the studied cadavers had incomplete and absent fissures, supernumerary lobes, and/or an azygos lobe. The azygos lobe with normal incidence of 0.5%-1% was found in 2% of this studied cadaver cohort, displaying the concave shape described in other studies. We found only one other article in the literature describing the five-lobed right lung we observed among the fifty studied cadavers. This right lung displayed normal bronchi patterning with supernumerary lobes due to non-obliteration of bronchopulmonary segments in the inferior lobe. Finally, we found no other articles describing such an enlarged lingula. This protrusion of the left superior lobe measured about ten times larger than the normal expected lingula. This suggests that this lingula is more comparable to an independent lobe, mirroring the actual morphology of a right middle lobe.

The anatomical variations we describe in this article are of clinical importance and academic interest. Surgeons and radiologists need to be aware of these normal anatomical variations. Such variations can alter surgical margins for lobectomies or segmentectomies and lead to misinterpretation of radiological images. Cardiothoracic surgeons should consider these variants to avoid or reduce mortality associated with invasive procedures.

We would like to thank the family of our donors for their beneficent contribution. Without their generosity, this article would not have been possible