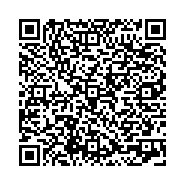 Anatomical variation of the brachial artery and its clinical implications

The body has an elaborate level of complicated vasculature, regarding location, branching & relations to vital structures, as these issues have great influences on clinical applications utilizing intervention radiology and surgical interference. The upper arm alone presents with vasculature that is frequently textbook, but also gives chances for further exploration in a cadaver study to learn more about the variation in vasculature. The brachial artery, which is the main arterial supply of the upper arm, is in question, and will be discussed in grave detail.

By learning about its embryological growth, we hope to understand the variation of the artery. This presentation specifically discusses the higher division of the brachial artery, and its clinical importance. Understanding the development of the brachial artery will help to give medical providers who work on cases such as intervention radiology procedures a more precise framework to work effectively in so that no unneeded damage will come to the patient.

The upper arms arteriole supply is often subjugated to a great deal of variation, specifically the brachial artery. In about 15-20% of cases [1], the arteriole supply shows bifurcation of the brachial artery to be landmarked at a higher location than usual. The subclavian artery gives rise to the axillary artery once the artery crosses the lateral border of the 1st rib. After the axillary artery begins its path, it quickly becomes the brachial artery when the artery passes the lower border of the teres major muscle [2]. However, what is not very well understood is in regard to angiogenesis & its clinical impact, specifically at the terminal part of brachial artery, as well as how this variation of bifurcation comes about.

The development of the high bifurcation of brachial arteries are due to ideas that can only be hypothesized or theorized. Rodriguez-Neidenfuhr stated that the arterial system in the upper limb is created based on the network of capillaries originating from the dorsal aorta [2-4]. In other theories, the forearm arterial variations are commonly due to growth failure in the paths of the arterial plexus limb buds, which is a consequence of irregular patterns of blood flow during embryological development [5]. This irregularity could be from any number of developmental defects or incomplete development fusions through the embryonic stages [6,7]. The origin of the arteries will depend on the route that the superficial brachial arteries trunk branching will take [8]. Either it will be an early trunk of origin or not. In normal individuals, the artery begins at the distal border of teres major muscle and terminates at the level of the neck of the radius [4,5].

Though out its course, it descends downward within the medial intermuscular septum, running with the median nerve [4,9,10]. Proximally, the median nerve runs lateral to the artery, and distally it runs medial to the nerve. The median nerve is the only structure to cross over the path of the brachial artery. During its course, the brachial artery gives off the following branches: profundabrachii artery, superior ulnar collateral artery, inferior ulnar collateral artery, nutrient artery, and muscular branches [1,2,4]. At the cubital fossa, the brachial artery courses medially to the tendon of biceps brachii, laterally to the median nerve, and deep to the bicipitalaponeurosis. For most individuals, the artery bifurcates at the cubital fossa into the ulnar and radial arteries. However, there is variation in the brachial artery division in 25% of individuals [1]. Clinical impact per reviewing articles, of 2017, there are six known variations of this artery, with the most common variation being the superficial brachial artery [4]. The brachial artery is commonly utilized for blood pressure measurements, dialysis, and arteriography, which could be compromised due to variations in this artery [1,5,10]. The investigation of these variations can assist clinical professionals to make more accurate and precise diagnoses [10]. When the femoral artery is inaccessible for cardiac ventriculography, the brachial artery may be used instead. It can also be used during arteriovenous fistula to manage chronic renal failure [1,4]. Information about the variation patterns in this artery are vital for radiologists and vascular surgeons to be considered to reduce the risk iatrogenic complications [5,6]. If the variation of vasculature is not mapped out prior to conducting an upperlimb procedure, gangrene, thrombosis, and, in severe cases, limb loss could result [6].

Methods and Result Of Dissection

During a routine graduate-level biology human cadaver dissection lab in the department of Biology at Chatham University in Pittsburgh, Pennsylvania, we discovered an unusual branching of the brachial artery. This dissection was completed in class on a male cadaver, aged 87 years old in supine position. A careful dissection of the right anterior arm region was undertaken, removing skin and subcutaneous tissues to expose cephalic &basilic veins (Figure 1). On the medial side of the lower arm, the brachial artery was exposed and cleaned from surrounding soft tissue. The brachial artery was located lateral to the median nerve, which was cleaned up of the surrounding areolar tissue. Once separated from the nerve and biceps brachii muscle, the bifurcation of brachial artery into two branches was evident above the elbow. The radial artery, found on the lateral side, is small in its caliber compared to the large ulnar artery on the medial side. The photos included were taken from a phone in the cadaver lab (Figure 2). 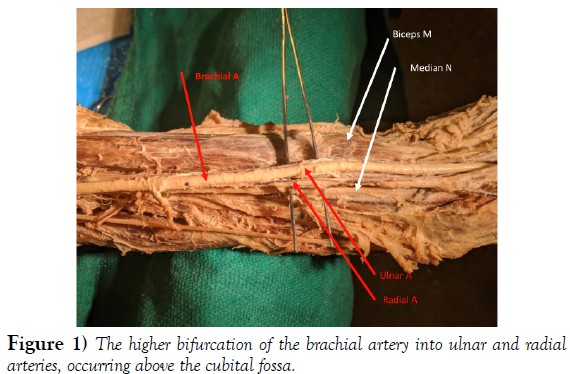 Figure 1) The higher bifurcation of the brachial artery into ulnar and radial arteries, occurring above the cubital fossa. 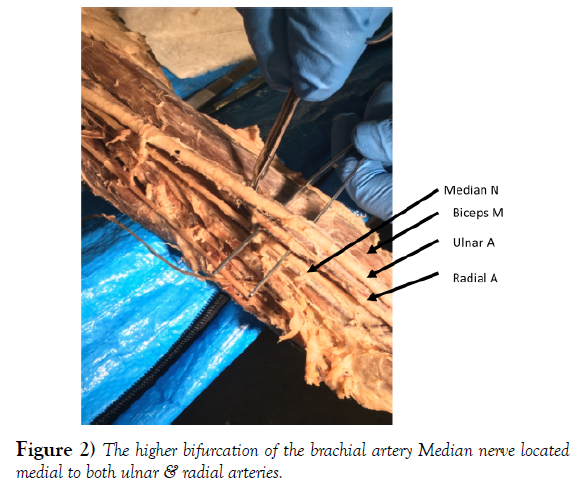 High rates of angiogenesis defects were encountered within the upper limb arterial tree, which stand at roughly 15-20% percent of cases, as well as each being an anomaly in the peripheral vascular anatomy, are based on genesis and regression or persistence of a segment of the embryologic axial artery [7]. One of the most common variations in upper limb vasculature is a high origin of the radial and ulnar artery. Due to the higher origin of the bifurcation, the brachial artery is located superficially & gets named superficial brachial artery. When this variant occurs it usually coincides with a short segment brachial artery that bifurcates proximal to the level of insertion of the coracobrachialis [11,7].

When persistence of the radial artery occurs, formation of communication between the radial and axial arteries in the cubital fossa fails to occur [9]. The artery runs an uneven course in relation to the median nerve which might result in compression of the median nerve in the lower part of the anterior compartment of the arm, with symptoms of median nerve neuropathy and ischemia. Variations occur at different regions along the axillary, brachial, radial, ulnar, and even the palmar arches of the hand. Per this high incidence rate, it should be common knowledge to medical professionals that it is important to perform an angiogram prior to clinical interventions [7,9,11- 15]. These clinical interventions entail procedures such as arteriovenous (AV) fistula creation that involves the cephalic vein & radial artery, cardiac ventriculography, when femoral artery is hard to be exposed, interventional radiological procedures & reconstructive surgical preparation for flap transplant. This alteration can also result in difficulty obtaining a blood pressure reading due to misplaced arterial pulse higher up than expected [7,9].

In addition, the bifurcation of the brachial artery is also the more common site for embolisms and due to the location of the higher bifurcation it would result in a larger area of ischemia.

In higher bifurcation, both vessels run more superficial and therefore become more vulnerable to injury, as well as more likely to be mistaken for a vein where accidental intra-vascular injection into it can occur and cause thrombosis, or gangrene, and even result in amputation of the fingers or the arm. There are also noted benefits to having an alternative vascular course. Its superficial placement can provide necessary nourishment for skin grafts. The superficial artery also makes it accessible for canalization and for taking radial artery grafts which are used largely for coronary artery bypass graft surgery.

The author(s) declared no potential conflicts of interest with respect to the research, authorship, and/or publication of this article.

The author(s) received no financial support for the research, authorship, and/or publication of this article.