Anxiety and coping strategies among patients with type 2 diabetes mellitus

CONCLUSION: The results explained a significant correlation between anxiety and diabetes. Regarding prevention, we suggest that, a chronically ill young adult should be recognized as a risk group for anxiety that would probably benefit from guidance in learning more active coping skills and maintaining a sense of personal control in facing chronic physical illness.

Type 2 diabetes is a chronic disease that occurs in the middle-aged and elderly people; it is associated with diabetic complications [1]. Psychological measurements are used to assess the overall condition of the patient, giving more insight into complex medical problems in terms of physical, mental, and social health [2]. Diabetes leads to feelings of powerlessness; it often means loneliness, loss of livelihood, as well as a muchneeded sense of security [3]. Psychosocial resources such as coping styles hopes perceived control and social support have been shown to associate with depression and anxiety among diabetic patients [4]. Coping styles are relatively stable dispositions reflecting general preferences in choosing amongst specific competing coping responses in a given situation. Many factors associated with poor adjustment in diabetic patients are beyond the control of the average healthcare professional [5]. It is clear therefore that the relationship between depression and diabetes could be bidirectional [6]. Depression as a consequence of type 2 diabetes mellitus [T2DM] could be explained by the burden of chronic disease or biochemical changes that occur as a result of T2DM [7].

The hypothesis of the present study was anxiety and coping strategies [adult hope scale, emotional security scale, and mental toughness] among patients with type 2 diabetes mellitus affected than in control group. Our results confirmed that hypothesis.

The study included 90 patients with T2DM, patients of the diabetes outpatient clinic [El eman and Elishamala hospitals] in Assiut city,

Egypt. This was a consecutive sample of patients with a diagnosis of type 2 diabetes mellitus [T2DM] according to the laboratory and clinical data. Individual interviews were conducted with patients during whom sociodemographic data, selected clinical data, and a subjective assessment of different psychological scales was collected.

We used Arabic scale modified from the Hamilton Anxiety Scale lists 14 types of symptom. The total score ranges from 0 to 56. A total score of 18 or more means anxiety [8]. The scale consisted from 31statement, the score of each one ranged from 1-4. The highest total score was 124 and it represented anxiety and least scored mean not anxious [9].

A tool that gives quantitative estimate of stiffness psychological individual consists of 47 items and it is a focus on the aspects of the mental rigidity of the individual lies the answer to the scale at three levels [always-sometimesnever] and total score ranges from 47 to 141 degrees in terms. The highgrade refers to the increasing awareness of the effector of mental toughness. This scale consists of three dimensions. The commitment part is a type of psychological contract is committed by an individual towards the same goals and values and the others around him. The control part refers to the extent of the individual’s belief that he can be with his control receives from the events and assume personal responsibility for what happens to him. The challenging part is the individual’s belief that the emerging change on aspects of their lives is something interesting and necessary for growth rather than a threat to him, which helped him to cope with, stress effectively [12-17].

12 item measure of a respondent’s level of hope. In particular, the scale is divided into two subscales that comprise Snyder’s cognitive model of hope: [1] Agency [i.e. goal-directed energy] and [2] Pathways [i.e. planning to accomplish goals]. Of the 12 items, 4 make up the Agency subscale and 4 make up the Pathways subscale. The remaining 4 items are fillers. Each item is answered using an 8-point Likert-type scale ranging from Definitely False to [18]. The Arabic valid and sensitive version of this scale consisted of 8 items after omitted the additional filter items. The total score ranged from 8 to 32 degree [19].

Statistical analysis was performed using SPSS 21. The sample size was calculated according to the following formula: n=no N/no+[N-1], and both samples were shown to be adequate [confidence interval 95%, p<0.05]. To determine statistical dependence, the parametric independent T-test and the chi-square test were used. Linear regression and Pearson correlation analysis used to examine the impact of social, demographic, and clinical factors on different variables as anxiety, adult hope scale, and other studied factors.

Data described as mean ± Standard Deviation or number and percentage according to need; independent-sample T test and Chi square tests were used

As regard adult Hope scale and anxiety, there was significant increase anxiety among diabetic patients than control group (Table 2).

Table 2: The comparison between adult hope scale and anxiety scales between patients and control groups

No significant difference was found between two groups as regard Emotional Security scale (Table 3).

Table 4: Mental toughness in both groups

This study investigated 90 people with T2DM in primary care [factors related to] the response to screening for anxiety and next coping strategy. The screening response rate was 100%. Our study reported a significantly elevated the level of anxiety among diabetic patients compared with control [p=0.012].

Diabetes requires complex self-management routines, such as medication or insulin-treatment adherence, blood glucose monitoring, frequent physician visits, diet, and physical activity [20,21]. The effect of diabetes on hope and mental toughness is variable as there were no significant differences between diabetic patients and control group. That may return to the increasing prevalence of diabetes among the population in Egypt [22]. So, the common association with diabetes makes it is easy to deal with disease and coping strategy will be effective. Also, our study reveals a positive non-significant correlation between duration of illness and adult hope scale (Figure 1). 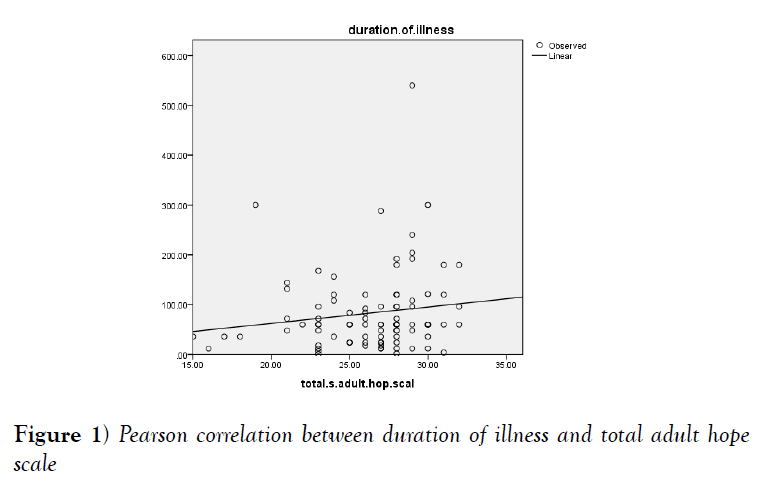 In other words, in the past, chronically ill persons failed both in coping with a variety of demands of life and in restoring the consequently disturbed emotional homeostasis. At this stage, the irrevocable, impairing and suspected to be. Progressively damaging characteristics of chronic illnessand particularly the uncertainty of its prognosis, namely, the constantly accompany although the not necessarily salient threat of the unpredictable occurrence of further damaging episodes pointed out [23].

However, our study aimed at elucidating the factors that may enhance the coping capacity of a chronically ill person with the demands imposed upon him by his condition and hence restore his emotional homeostasis. Considering the stress-potential of chronic illness, with its power of aggravating anomie, alleviating the emotional disturbance seems vital for preventing further deterioration of the person’s condition [23].

Anxiety was significant higher in T2DM, and it also, inversely affect upon mental toughness. While, no significant difference reported between T2DM and matched healthy control as regard adult hope and emotional security scales.

Limitations of the Study

Small sized sample included in the study. We did not follow up patients after described anxiolytic drugs to patients.

The authors state that they have no conflict of interest.

All procedures performed in our study involving human participants were in accordance with the ethical standards of the institutional and/or national research committee and with the 1964 Helsinki declaration and its later amendments or com-parable ethical standards.

Informed consent was obtained from all individual participants included in the study.

The authors would like to thank all diabetic patients and healthy voluntaries who shared in our study. 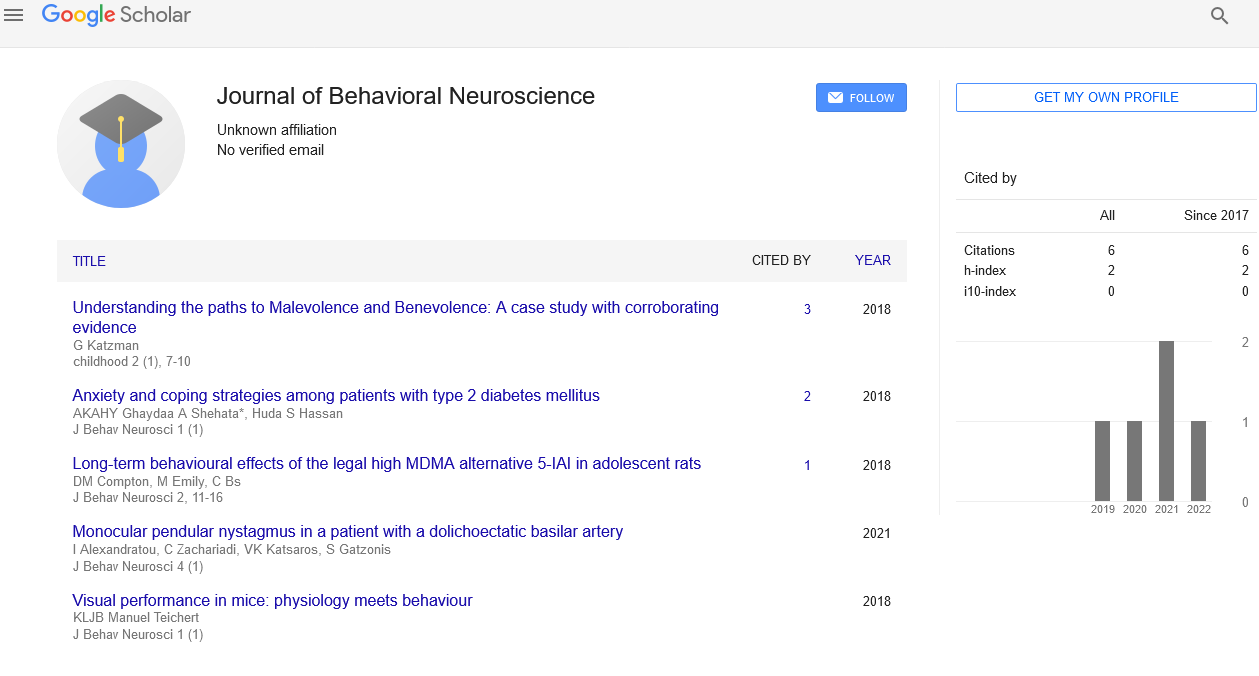