During the third to fifth week of intrauterine life the internal carotid artery develops from the proximal portion of the third aortic arch and from the cranial portion of the dorsal aorta. Alterations in its development give rise to three entities: Hypoplasia, aplasia and agenesis. A case of bilateral agenesis of the internal carotid artery is presented in a 24-year-old patient who underwent an angiotomography in the Imaging Service of the Pasteur Hospital, Montevideo, Uruguay. Anatomo-clinical implications are discussed.

The internal carotid artery (ICA) develops from the third aortic arch (proximal portion) and dorsal aorta (cranial portion). Alterations in their development during the third to fifth week of intrauterine life give rise to three entities: Hypoplasia, aplasia and agenesis [1]. Hypoplasia is defined as the presence of a smaller caliber artery in adult life resulting from incomplete development. Aplasia is defined as the absence of the artery in adult life, having existed its embryonic precursor, evidenced directly by remnant vessels or indirectly by the presence of the ipsilateral carotid duct. Agenesis is defined as the complete absence of development of the artery, not having an embryonic precursor [1,2]. The first case of agenesis of the ICA was described by Tode in 1787 by cadaveric dissection [1,3]. Currently, it is estimated that it has an incidence of less than 0.01%, which may be unilateral, left predominant, or bilateral in a ratio of 3: 1 [1,4-6]. We present the case of a 24-year-old male patient with Bilateral agenesis of the ICA. Its anatomo-clinical implications are discussed.

We present the case of a male patient, 24 years of age, with no personal history to highlight, with a history of spastic gait from childhood.

A computed tomography (CT) of the skull with intravenous contrast was performed (Figure 1), which evidences the bilateral absence of the carotid duct on the base of the skull, without alterations in the brain parenchyma. Subsequently, a magnetic resonance imaging (MRI) of the skull is requested, which demonstrates the absence of flow void of both internal carotid arteries. 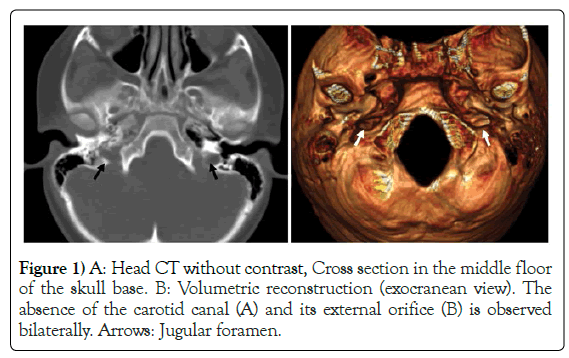 Figure 1) A: Head CT without contrast, Cross section in the middle floor of the skull base. B: Volumetric reconstruction (exocranean view). The absence of the carotid canal (A) and its external orifice (B) is observed bilaterally. Arrows: Jugular foramen. 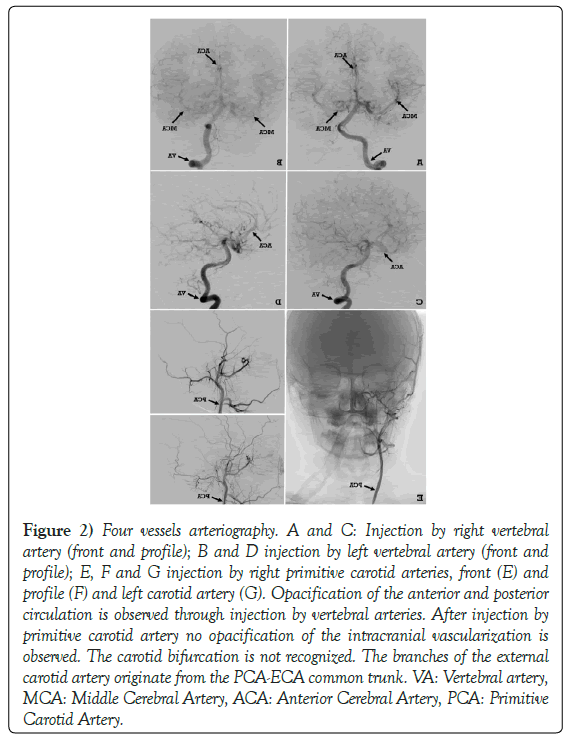 The bilateral absence of the ICA is demonstrated, with the cerebral vascularization totally dependent on the vertebrobasilar system, the posterior pillar of the cerebral arterial circle.

The ICA is one of the terminal branches of the ACC. It forms on each side the anterior pillars of the cerebral arterial circle. According to the Bouthilier classification, it has 7 segments: Cervical, petrosal, lacerum, cavernous, clinoid, ophthalmic and communicating or terminal [7].

Alterations of development between the third and fifth weeks determine the agenesis of the ICA, although the sequence of events is still unknown [5]. This supposes the absence of the carotid canal (CC), which develops in the base of the skull after the fifth to sixth week. If the ACI primordium does not develop, the CC will not either. This explains why the true agenesis of ICA occurs before 24 days of embryogenesis, and allows to differentiate the agenesis of carotid hypoplasia [3,9,10].

The agenesis of the ICA is estimated to have an incidence lower than 0.01%. It can be bilateral, or more frequently unilateral with a 3: 1 ratio. When it is unilateral, it is observed with a predominance of left [1,4-6].

Its diagnosis is made due to absence of ICA in angiographic studies, and absence of CC by CT [2,11]. This last point seals the diagnosis of agenesis, and allows discarding differential diagnoses such as total arterial occlusion or carotid dissection [11].

Its etiology remains uncertain. Although several authors have proposed different theories to justify the unilateral agenesis of ICA, mechanical and hemodynamic, there is not yet one that explains bilateral agenesis [5].

When there is hypoplasia, aplasia or agenesis, the blood flow of the affected side or sides is partially or totally compensated by another arterial system, such as the vertebro-basilar system or the contralateral ICA if it exists [1].

The development of collateral circulation leads to the majority of patients being asymptomatic, and the finding is usually incidental during the performance of imaging studies [2,3,6]. However, some have symptoms such as headache, blurred vision, hearing loss, hemiparesis with or without cranial nerve involvement, or intracranial hemorrhage due to aneurysm rupture [9].

The latter is of special interest, since the agenesis of ICA is associated with other vascular anomalies, such as the presence of intracranial aneurysms [5,9,12]. According to different series, the incidence of intracranial aneurysms in association with agenesis or aplasia of the ICA is 24% to 43%, much higher than that found in the general population estimated at 2% to 4%. In some series, this incidence rises to 67% [2]. This strong association can be explained by two theories, the first is that both conditions occur independently during embryonic development, and the second, because of the increase in blood flow on the healthy side and the hemodynamic changes that imply [2].

Likewise, it is important to emphasize that brain circulation depends exclusively on the vertebro-basilar system, which is a determining factor in situations of acute brain injury.