Among all congenital abnormalities, anomalies of urinary tract comprise about one quarter in which the incidence of double ureter is 1 in 125 or 0.8% is rather common, whereas the bilateral complete double ureter is still a rarer condition. We observed bilateral duplex renal pelves and ureters in a female cadaver during routine dissection. The ureters were opening into the bladder separately. Such cases of bilateral double ureters are often associated with repeated urinary tract infections, stone formation and hydronephrosis.

Malformations of the urinary system are common and comprise about 3 percent of live births. These various malformations include ectopia, malrotation and other morphological variations such as number of kidneys, ureters etc. Duplex ureter is one among them, which occurs 1 in 125 cases or 0.8% of a non-selected population with female to male ratio of 1.6:1 or 62% of females. The duplex ureter may be unilateral or bilateral and sometimes it is complete or incomplete. The duplication of the ureter is a rather a common anomaly; however bilateral total duplication is much rare. Patients with this anomaly have an increased risk of urinary tract infections, pain, hydronephrosis and stone formation. Therefore considering a rare occurrence of duplication, its embryological significance and clinical implications, we report a case of bilateral complete duplex renal pelves and ureters.

During routine dissection classes for undergraduate medical students we observed bilateral duplex ureters in a 40-year-old female cadaver. When abdomen was exposed from the front the two ureters on both sides were wrapped in a common fascial sheath and were running down parallel from the renal pelvis to the urinary bladder (Figure 1). On the left side, when traced upwards there was no communication between the ureters at the renal pelvis. Among the two ureters, the one placed medially was coming from the upper part henceforth called upper duct and the other placed laterally called lower duct was seen to be draining the lower part of kidney (Figure 2). The upper duct began as efferent of a pelvis draining urine from upper 3 minor calyces. Correspondingly the lower duct emptied remaining major area, which is approximately 2/3rd portion of the kidney (Figure 3). 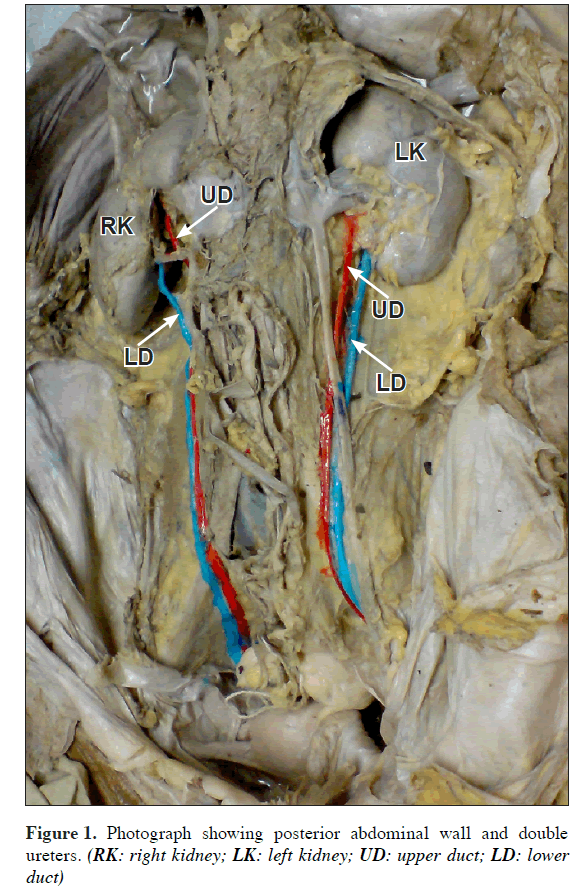 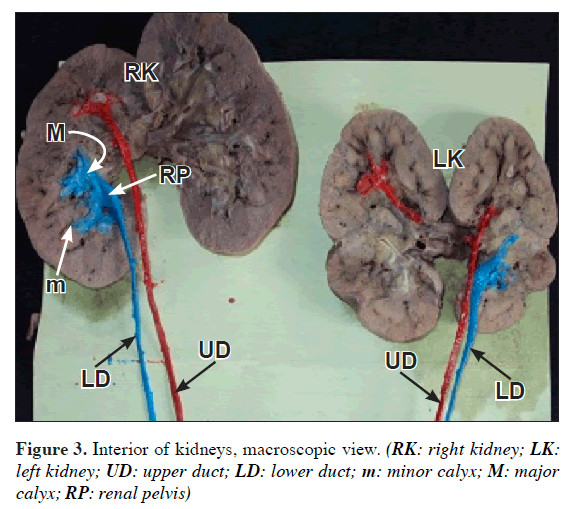 Each ureter and renal pelvis had well-marked fascial investment and it was quite distinct enveloping the kidney and both ureters up to the bladder. When traced downwards both the ureters were piercing the urinary bladder separately and upper duct was seen to be opening at a lower level than lower duct which was at a higher level (Figure 2), thus the two ureteric course was similar on both sides like a mirror image. The left kidney was small measuring 9x4x2.5 cm and showed marked fetal lobulations on both anterior and posterior surfaces. Further a distinct transverse ridge was seen on anterior surface of kidney running backwards.

On the right side both ureters pursued a similar course and their opening into the bladder was similar as that of the left side (Figure 2). The course and opening on both sides were exactly like a mirror image. The right kidney showed traces of fetal lobulations; however its measurements were 11x5x3 cm suggesting as usual.

Malformations of urinary system are relatively common comprising about 3% of live births.

At about 4th week of gestation, evaginations arise from the distal mesonephric duct. These evaginations are ureteric buds and will interact with their surrounding mesenchyme called metanephric blastema. This interaction between ductal system and mesenchyme plays a major role in branching of ureteric bud and subsequent development into ureter, pelvis and calyceal system up to collecting tubule of kidney [1].

The reported incidence of ureteral duplication varies widely among different series depending on the clinical data, survey or autopsy. Nation observed 109 cases of duplication of ureters in 16,000 autopsies with an incidence of 0.68% [4]. Whereas Campbell in his personal series of 51,880 autopsies observed 342 ureteric duplications with a rate of 0.66% [5]. Combining Nation’s autopsy series and Campbell’s series the projected incidence of ureteral duplication is 1 in 125 or 0.8%. Further it is noted that the frequency is more in females than males with a ratio of 1.6:1 or 62% of females. The present finding is also in a female cadaver. Unilateral duplication of ureter occurs about six times more often than bilateral and incomplete duplication is three times more common than the complete. The individuals of affected parents are more prone for the duplication of ureters and thereby its complications. The incidence in them will increase to one in eight as compared to predicted one in 125 in general population as it is determined by autosomal dominant trait with incomplete penetrance [6].

There are two types of complete and incomplete double renal pelves and ureters. The first type has two ureters entering separately in to the urinary bladder. The second type has one ureter entering urinary bladder after two ureters are combined. The case presented here is of first type. The literature reveals unilateral and incomplete types as more frequent than the bilateral and complete types, respectively [7].

MacConaill observed bilateral double ureters which were fusing in the lower part. On both sides the hemiureters proceeded from separate pelvis, the lower pelvis draining the greater part of the kidney. The upper duct described a helical course with the lower duct and drained smaller upper part and on both sides opening into bladder as single ureter [8].

Whereas in our case the two ureters on both sides were separate and complete, descended parallel downward wrapped in a common peri-ureteric sheath and pierced the bladder wall separately. The opening into the bladder was reverse i.e., upper duct opening at a lower level and the lower duct at a higher level and thus there were four openings in the bladder. Thus the Weigert-Meyer law was obeyed by the two ureters [9].

Verna et al. observed the association of uretero-ureteral reflux and uretero-pelvic junction obstruction of lower pole of kidney with renal angiomyolipoma and incomplete duplication [10]. Whereas the complete duplication is associated with vesico-ureteral reflux, ectopic ureterocele or ectopic ureteral insertion [11]. Further a case of kidney with double ureters was observed in a 5-month-old baby and it was successfully transplanted to a 25-year-old recipient [12].

Based on the available literature, the present case is very rare. Usually it will be detected at autopsy or as radiological finding but is associated with wide variety of clinical manifestations. Hence the knowledge of which should be borne in mind when dealing with a case of repeated urinary infections, urinary reflux disorders, hydronephrosis or stone formation.