During routine dissection of upper limb for MBBS students, an unusual attachment of pectoralis minor muscle (PM) was observed in a 78 year old male cadaver on its right side. PM was found to be arising from second to fifth ribs near their costochondral junctions. The present case is unique due to extended origin of pectoralis minor muscle. The knowledge of anatomical variations of origin and insertion of pectoralis minor is of great importance to orthopaedicians and plastic surgeons to minimize complications during surgical procedures.

Pectoralis minor (PM), a thin triangular muscle located deep to pectoralis major muscle, arises from upper border and outer surface of third, fourth and fifth rib near their costochondral junction and courses superolaterally to get inserted on coracoid process of scapula [1]. PM is helpful in drawing scapula forward around the chest wall and rotates scapula in forward direction. It is an important anatomical landmark that defines different parts of axillary artery and levels of pectoral axillary lymph nodes [2]. Variants of pectoralis minor muscle recorded in the literature are usually associated with unique insertion of the muscle onto the structures other than coracoid process of the scapula. These ectopic insertions include supraspinatus tendon, coracoacromial ligament, humeral tubercles and clavicle [3]. This type of variation can lead to the restriction of movements of shoulder especially during abduction and lateral rotation. In addition to these ectopic insertions’s variations related to origin of pectoralis minor have also been reported [4-7]. Variations of pectoralis minor muscle are also of interest to the plastic surgeons, owing to its use as a free flap [8].

During routine dissection of upper limb for MBBS students, an unusual attachment of pectoralis minor was observed in a 78-year-old male cadaver on its right side. The region was carefully dissected, clavicular part of deltoid and pectoralis major muscles were removed near their origin to expose pectoralis minor muscle. PM was found to be arising from second to fifth ribs near their costochondral junctions (Figures 1-5). It was found to be inserted on coracoids process, as usual. No variation was reported in the attachments of pectoralis major muscle. 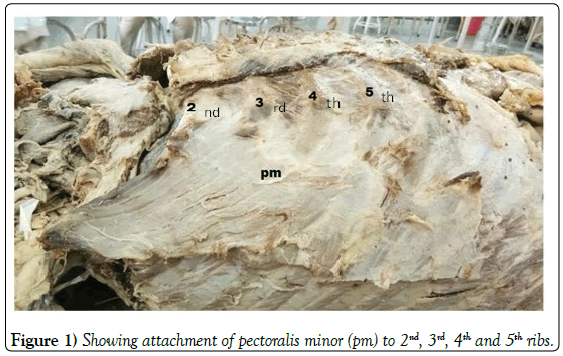 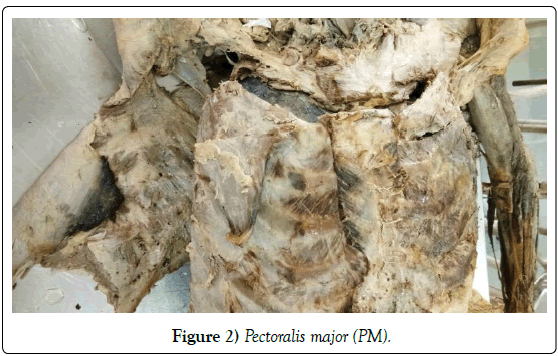 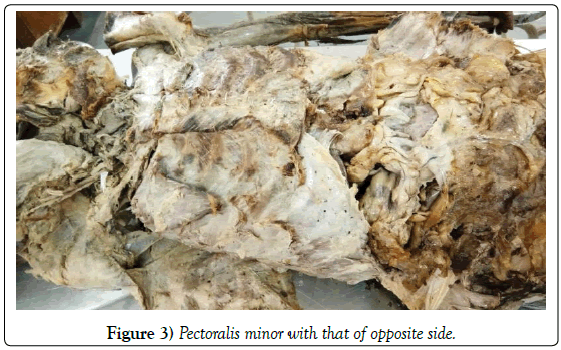 Figure 3) Pectoralis minor with that of opposite side. 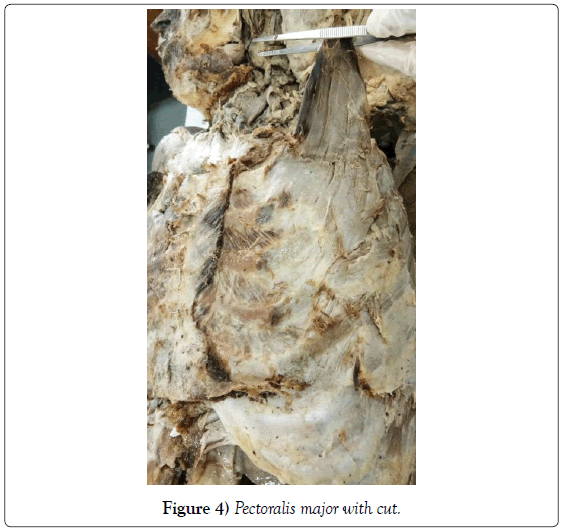 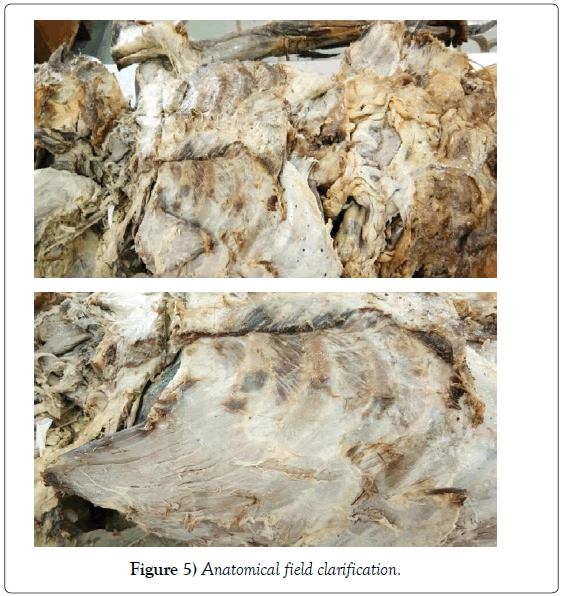 Pectoral muscles develop from pectoral premuscle mass situated near the lower cervical region on medial side of upper limb bud. Two pectoral muscles remain as a single columnar mass attached to humerus and coracoid process of scapula. As mass differentiates, it flattens out. Its distal portion extends caudoventrally to distal end of upper ribs. Proximal portion of this muscle mass split into major and minor portions and the former is attached to humerus and the other to coracoid process. Both muscles usually remain fused near their costal attachments. Pectoralis minor muscle now has its distinct attachment to the 2nd, 3rd and 4th ribs. This embryological origin may persist later in adulthood. Some endogenous and exogenous factors can cause total or partial agenesis of pectoral muscles or development of various variations [9].

Anson et al found higher origin of pectoralis minor (origin from 2nd, 3rd and 4th costal cartilages) in 15% cases. They did not describe laterality of the cases [4]. We found unilateral extended origin of PM. Sinha et al. found bilateral variation in origin of pectoralis minor muscle in 60-years-old male cadaver where PM was arising from 2nd to 4th ribs and their costochondral junctions. In this case, hyperabduction and lateral rotation of the shoulder was likely to press neurovascular structures giving rise to neurological and vascular symptoms in the arm [5]. Dwivedi et al. found a variation in origin and insertion of pectoralis minor in male cadaver on the right side. PM was arising from 2nd to 5th ribs. It was found to be inserted on coracoid process and few fibres were found blending with coracobrachialis and short head of biceps brachii muscles [6].

After a thorough search of literature this case is the first reported case of higher extended origin of PM (without any other variation).