Objectives: Clear cell meningiomas comprise <1% of meningiomas and are classified as World Health Organization grade II tumors. Referred to as the meningioma with benign looking histology but aggressive behavior more research is needed to confirm the unique clinical, radiological and prognostic variables that characterize this specific meningioma sub-type.

Methods: We present a short series of two patients with similar clinical features and radiological imaging characteristics whom presented to our unit. Histo-pathological analysis revealed both lesions to be clear cell meningiomas. We conducted a PubMed search of the literature on clear cell meningiomas to evaluate the observed similarities.

Conclusion: Our short series supports the demographic profile of patients presenting with clear cell meningiomas by having a similar gender distribution but does not support the mean age described in the literature. Our short series supports the radiological features described for this meningioma subtype. Our patient management supports adjuvant radiotherapy as an important factor associated with progression free survival.

Clear cell meningiomas comprise <1% of meningiomas and are classified as World Health Organization (WHO) grade II tumors (1). Described as having a benign looking histology but aggressive behavior with a 60% recurrence rate the specific histological features that characterize these tumors include polygonal cells with clear cytoplasm; interstitial collagen bundles and inconsistent whorl formations (2). The tumoral cells contain abundant glycogen which stains strongly positive with periodic acid Schiff staining, are epithelial membrane antigen positive and vimentin positive (3). As a rare subtype of meningioma most of the literature on clear cell meningiomas describes isolated case reports or a short series with few patient numbers (4-6).

We present a short series of two patients, both in their 5th decade of life, whom presented to our neurosurgical unit. Both patients had a comparable duration of symptoms suggestive of an intracranial space occupying lesion. Radiological investigation revealed each patient to have a single large supra-tentorial dural based lesion, one of which was right occipito-parietal and the other was right fronto-temporal. Both of these lesions showed remarkably similar imaging characteristics. Both patients were medically optimized and taken for surgical resection of their lesions. Gross total resection was achieved in one patient while a subtotal resection was achieved in the other patient. Histo-pathological analysis confirmed both lesions to be clear cell meningiomas. Both patients were referred for adjuvant radiotherapy and at one year post surgery both patients had no tumor progression.

A 55-year-old female presented to our neurosurgical unit with a six month history of progressive right occipital headache associated with nausea. This was complicated by a two month history of rapidly decreasing visual acuity in both eyes. She was HIV negative and had no other medical problems. Neurological examination revealed a fully conscious patient of GCS 15/15 who was now blind with no perception of light bilaterally. Funduscopic examination revealed secondary optic atrophy. She had no motor deficit and was ambulant. Radiological investigation revealed a large right parietal-occipital para-sagittal dural based tumor that had an irregular border. The lesion showed heterogeneous enhancement on contrast administration. Extensive bihemispheric edema was noted in relation to the lesion and there was a lack of hyperostosis in the adjacent bone. These were also significant midline shift and entrapment hydrocephalus of the left lateral ventricle (Figures 1 and 2). The patient received a short course of pre-operative steroids and was taken for resection of the lesion. Intra-operatively the lesion was noted to be extremely vascular and a subtotal resection was achieved. The histo-pathological report confirmed the lesion to be a clear cell meningioma. She awoke with no new neurology and was referred for adjuvant radiotherapy. At one year out-patient review she showed no tumor progression. The patient is booked for annual out-patient review including MRI imaging for five years and thereafter every 2 years for a further six years. 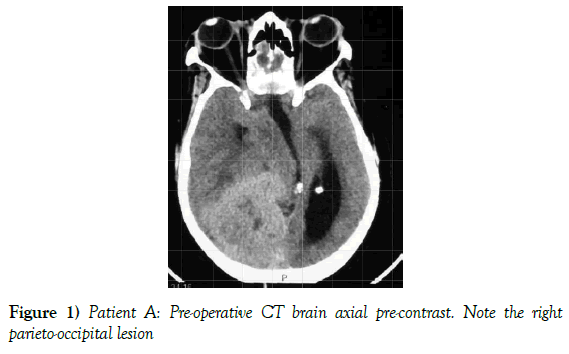 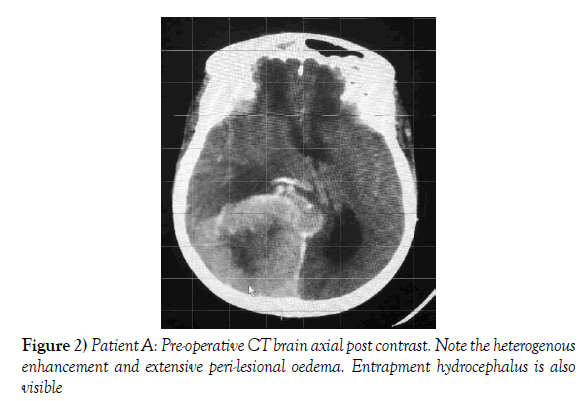 A 53-year-old male presented to our neurosurgical unit post-ictal, with a GCS 14/15, having suffered a first episode adult onset generalized tonic clonic seizure. The history obtained from his relatives was that he had been complaining of a progressive right parietal headache for the last four months and that they had noted him becoming weak on the left side of his body for the preceding one month prior to this seizure. He had however been ambulant without assistance prior to this event. Neurological examination revealed a patient of GCS 14/15 whom was hemiplegic 3/5 with absent reflexes and decreased tone. Radiological investigation revealed a right fronto-temporal dural based tumor that was mildly heterogeneous on contrast administration. The lesion was surrounded by extensive hemispheric edema and there was significant midline shift and entrapment hydrocephalus of the left lateral ventricle (Figures 3-8). The patient received a short course of pre-operative steroids and was taken for resection of the lesion. Intra-operatively the bone was noted to be extensively eroded (Figure 9) and the lesion was extremely vascular. A gross total resection was achieved (Figures 10 and 11). The histopathological report confirmed the lesion to be a clear cell meningioma. Postoperatively the patient had a complete resolution of his hemiplegia and was referred for adjuvant radiotherapy. At one year out-patient review the patient showed no tumor progression. Similarly he is booked for annual out-patient review including MRI imaging for five years and thereafter every 2 years for a further six years. 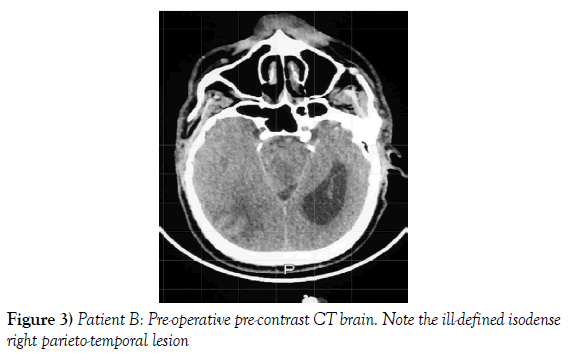 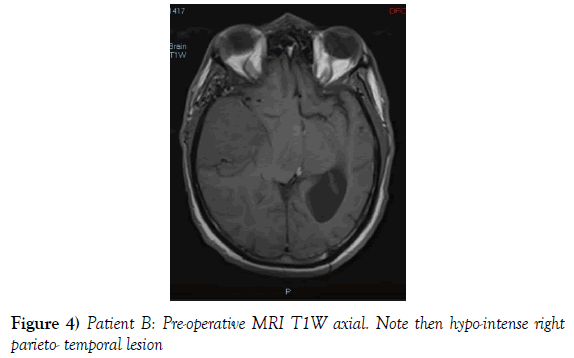 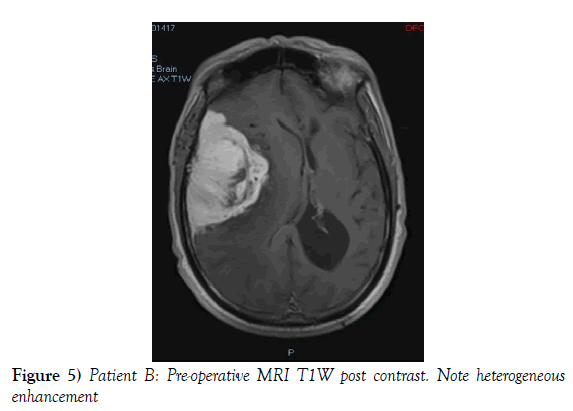 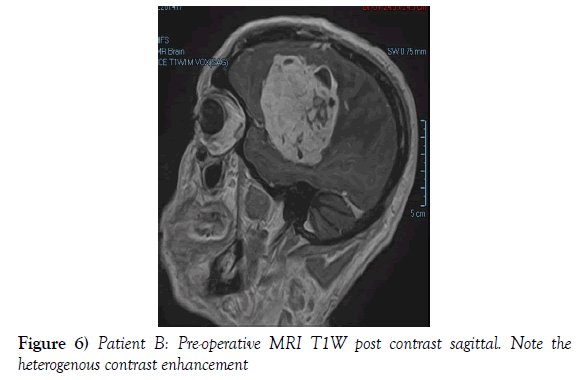 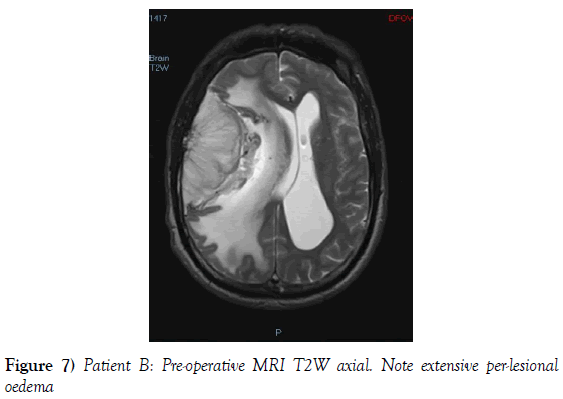 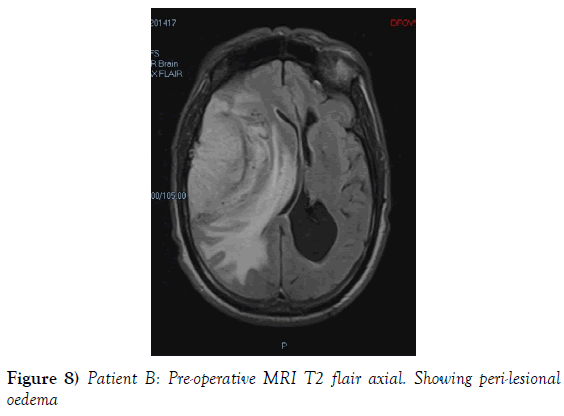 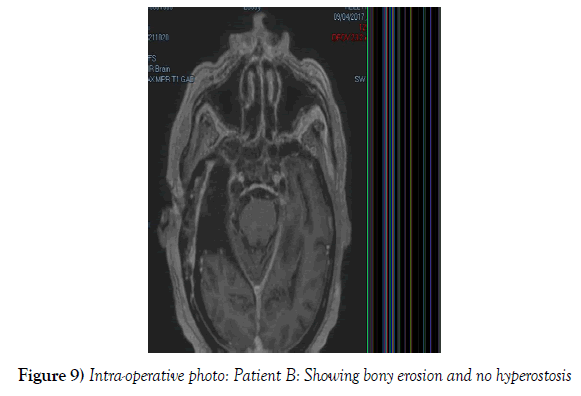 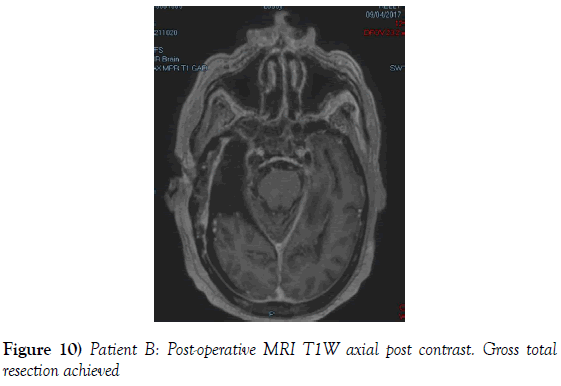 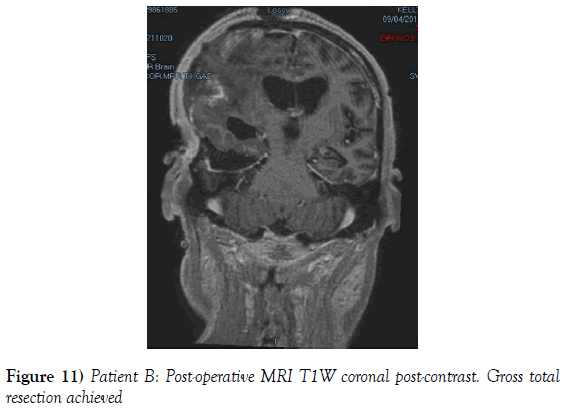 We conducted a PubMed review of the English literature with the key words “clear cell meningioma” and the patient demographic, clinical and radiological features and factors associated with progression free survival in clear cell meningiomas were compared to that of the two patients in our short series.

The gender distribution of the two patients in our short series was 1:1. The mean age of the subjects was 53 years. The mean duration of symptoms between onset and diagnosis was 5 months. Radiological investigation revealed both patients to have a single supratentorial lesion of significant size, both of which enhanced heterogeneously on contrast administration and both of which had extensive perilesional vasogenic edema. Neither of the lesions in the patients in our short series had associated hyperostosis of the adjacent bone and one had bony erosion intra-operatively. In patient A subtotal resection was achieved due to bleeding from the tumor and in patient B a gross total resection was achieved. Both patient had similar histopathological results confirming these tumors to be clear cell meningiomas. Post-operatively patient A had no new neurology however her visual acuity did not improve while patient B had a complete resolution of his hemiplegia. Both patients were referred for adjuvant radiotherapy and at one year out-patient review neither patient had progression of their disease.

An article by Wang, referring to meningioma’s overall, notes the amount of peri-lesional edema seen to be related to the 1) Pathological type of meningioma; 2) Amount of lymphocytic infiltrate; 3) Rich blood supply (4). In our short series both tumors were clear cell meningiomas with a rich blood supply and hence the extensive perilesional edema noted in both of the patients in our short series support the findings of this study by Wang (4).

The traditional treatment of meningioma related perilesional edema with corticosteroids is known to be non-specific, ineffective, and incur long term side effects. This etiology of this peri-lesional edema has been determined as due to upregulation of vascular endothelial growth factor A (VEGF-A) (10). As perilesional edema is a significant characteristic of clear cell meningiomas (4,7,9) this is a future molecular target in the treatment of this specific tumor type (10). Another concern with regards this perilesional edema is wounded meningioma syndrome which is akin to the perfusion pressure breakthrough seen post arteriovenous malformation resection (11). Although defined as far back as the 1980’s this concept describes the sudden hyperemia within this edematous tumor bed post decompression of a large tumor mass and may explain post-operative hemorrhage into the resection site despite meticulous intra-operative hemostasis (12).

In contrast the conclusion of the European Organization for the Research and Treatment of Cancer (EORTC) and the Radiation Oncology therapy group (RTOG) 2014 study that notes even in gross total resected atypical and malignant meningiomas that three year progression free survival is increased from 70% without adjuvant radiotherapy to 89% with adjuvant radiotherapy (13).

It is our opinion that further research is needed to clearly establish the benefit of adjuvant radiotherapy in gross totally resected clear cell meningiomas.

None of the authors listed below have any financial or personal relationships with other people, or organizations, that could inappropriately influence (bias) their work, all within 3 years of the beginning the work submitted.