Cohort study to estimate the effect of the introduction of the NHS Institute for innovation and improvement paediatric early warning system on the workload of nursing, junior and senior medical staff

Results: It was validated that the decisive factor of the success of the crossover bypass procedure was a sufficient diameter of venous graft, i.e., not less than 7–8 mm. The advantage of dilated great saphenous vein of affected

extremity is shown in this study. It has been determined that in 70.6% of the patients, crossover grafts have a propensity to dilate, furnishing the requisite venous blood outflow from an affected extremity. Venous hemodynamic studies of the affected extremity with occlusion of the external pressed graft revealed that crossover bypass assumes the primary role in the maintenance of venous return. In 15 years, cumulative patency of crossover grafts was 77%. There was cumulative clinical success in 71% of the patients. The patency rate of saphenopopliteal grafting within the period up to 12 years was 91.7%. Long-term outcomes of the procedures proved durable functioning of the grafts and improvement of regional venous hemodynamics. There was significant improvement of reconstructive operations with the usage of distal arteriovenous fistulas.

National recommendations have brought about an increase in the number of hospitals using some form of Paediatric Early Warning System (PEWS). Since 2005, the numbers of hospitals in Great Britain using PEWS has increased from 22% to 85% [1]. Concerns have been raised about the scoring tools used in these systems as in order to achieve high sensitivity they have low specificity [2,3]. The consequence is a low positive predictive value which could lead to over triggering of a rapid response team (RRT) or other escalation to abnormal scores. This will have implications on the workload for nurses, junior and senior doctors if the PEWS tool is used correctly.

The NHS Institute for Innovation and Improvement (NHSIII) has a series of four charts based on the work of the brighton system, freely available to download and use [4]. These charts are classed according to age range and observations outside the normal range are calculated to give a score. The overall score is colour coded and this triggers a response depending on the severity of the score. A higher score triggers a higher level of staff seniority to respond and assess the child.

The NHSIII PEWS was the second most frequently used PEWS in Great Britain [1]. The purpose of this analysis was to determine the workload implications for staff to assess a child following a trigger of the PEWS tool if it was fully implemented as designed.

Data were collected prospectively on observations and outcomes to validate another PEW score. The method of data collection is described elsewhere [6]. In summary paediatric (age 0–16 years) admissions to any of the paediatric wards at the University Hospital of Wales over a 12 month period, 1 December 2005 and 30 November 2006, were eligible for inclusion into the study. Patients admitted directly to the paediatric intensive care unit (PICU) and the paediatric high dependency units (PHDU) were excluded. Observations were recorded directly onto a new paediatric observation chart on which staffs were trained prior to its introduction.

Data were analysed using Stata 11.2 [7]. All patient identifiers were removed from the data set prior to analysis. The original study [6] was approved by the Trust Research and Development Committee and ethical approval was granted by the South East Wales Local Research Ethics Committee.

Table 1: Time of day of NHSIII PEWS scores that would trigger a response

Scores that would have triggered a response from a consultant were more likely to occur outside of normal working hours, with calls for advice (p=0.04) and the requirement for a consultant to attend (p=0.04) being significantly more likely to happen out of hours. Consultants were most likely to need to see the child in response to a trigger by a NHSIII score in the early hours of the morning (Figure 1). 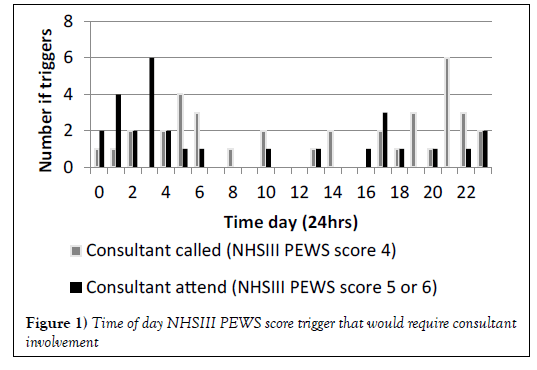 PEWS are a complex intervention combining education, a score or activation criteria, and a response mechanism to assess and treat the child. PEWS aim to identify children at risk of sudden deterioration and by triggering an assessment ensuring that early intervention takes place to reduce the risk of death or serious morbidity. The performance characteristics of the NHSIII PEWS score are similar to that of other published scores [3,5,8,9]. In common with other scores the NHSIII PEWS score has relatively low specificity and in consequence the majority of children have an abnormal score during an admission and the majority of triggers are false positives. Scores that provide mathematical results give the impression of greater precision but cannot replace clinical evaluation which remains sovereign [10].

No paediatric randomised control trials of the effectiveness of PEWS have been published to date and results from before and after studies are inconsistent [11-14]. These studies utilised a PEWS to trigger assessment by a medical emergency or rapid response team which included specialist staff from PICU. These specialists are only available in tertiary hospitals which limit the units who can introduce the whole of this complex intervention. The NHSIII PEWS can be introduced in District General Hospitals but it utilises existing staff who are already caring for the child to provide the response to abnormal scores rather than a more specialist team. No highgrade studies investigating the effectiveness of a PEW that does not include a specialist response team have been published. The staff time required for the full implementation of the NHSIII PEWS, an intervention based on “expert opinion of best practice” that has not been shown in clinical trials to reduce morbidity and mortality, are substantial.

Consultants were most likely to need to see the child in response to a trigger by a NHSIII score in the early hours of the morning. It is not possible to determine from this study why scores that would have triggered a response from a consultant were significantly more likely to occur outside of normal working hours. Fewer and less experienced staff are present in hospitals out of hours, which may contribute to a delay in the management of an unwell child resulting in higher scores before intervention. However, this finding requires further investigation.

The low specificity and low positive predictive value of the NHSIII PEWS score would generate a significant workload for clinical staff. A nurse in charge of a 30 bed paediatric ward would be required to be involved in the assessment of an average of 2.4 children per hour. Assuming that an assessment typical takes 10 minutes [15], this represents an average additional workload of 24 minutes per hour. A Consultant responsible for a 60 bed inpatient unit would on average be called in response to a NHSIII score around 3 times in a 24 hour period, and be required to attend to assess a child at least once every 24 hours they were on duty outside of normal working hours. Full implementation of the NHSIII PEWS will be incompatible with European Working Time Directive unless Consultants adopt similar work patterns to Junior Doctors.

All authors contributed to the conception of the work; EDE and AO to the acquisition of data, BWM to the analysis of data, CVEP to the interpretation of data for the work.

BWM and EDE drafted the manuscript; CVEP and AO revised it critically for important intellectual content. All authors approved the final version of the manuscript submitted for publication.