Clubfoot is a common pediatric condition with a variable etiology. Most commonly it is multifactorial with an uncertain cause. However, on occasion a definitive anatomical abnormality predisposes to the development of clubfoot. We present a case of a 3-year-old girl with clubfoot presenting with a full range of motion, but no active ankle or toe dorsiflexion despite anterior compartmental muscle contraction. The cause of this appearance was noted intraoperatively to be a common anterior compartment tendon, which was adhered to the distal tibia. This case presents an interesting anomaly that clinicians treating clubfoot should be aware of.

Clubfoot is a common pediatric condition with a variable etiology. Most commonly it is multifactorial with an uncertain cause [1,2]. However, on occasion a definitive anatomical abnormality predisposes to the development of clubfoot [3]. It is therefore important for the clinician to be aware of the varying etiologies of this common condition. We present the first documented case of a child presenting with clubfoot caused by a common tendon of the anterior compartment of the leg.

A 3-year-old Caucasian female born with left-sided congenital talipes equinovarus (CTEV), which underwent Ponseti casting from birth and then a tendo-achilles lengthening at age 8 weeks, followed by 6 further weeks of serial casting and then Dennis-Brown boots and bars continuously until the age of 6 months, and then during sleeping until the age of 13 months. At that stage she had an excellent correction and therefore the splintage was discontinued. She had reached all of her developmental milestones and began walking at age 17 months, but was noted to progressively in-toe with a mild circumduction gait. At age 26 months, she underwent a further 6 weeks of serial casting with minimal clinical improvement.

She had no other medical problems, born at 42 weeks with a normal pregnancy but caesarian section due to failure to progress. She has a paternal uncle and a maternal aunt with clubfoot and no other family history.

At age 3 years her clinical examination revealed a healthy non-syndromic child with the obvious equinovarus foot as well as a mild degree of metatarsus adductus. She mobilized with a plantar-flexed foot. The foot was pliable, with the metatarsus adductus fully correctable, but the foot could only attain a plantargrade position, with no further dorsiflexion achievable. Tibialis anterior function was difficult to assess in this child, because there was muscle contraction, but no active ankle dorsiflexion. A similar finding was noted for extensor hallucis longus and extensor digitorum longus. Neurovascular examination was normal although palpation of a dorsalis pedis pulse was difficult. She had a normal spinal examination and the contralateral foot was normal. She had no other pertinent clinical findings.

Her X-rays revealed a plantarflexed foot but no other skeletal abnormality (Figure 1). Figure 1: Preoperative X-ray (AP and lateral) of the patient?s foot in maximal dorsiflexion.

She was therefore brought forward for operative intervention for her residual clubfoot. A postero-medial approach and tendo-achilles lengthening was performed with restoration of dorsiflexion and no complication. 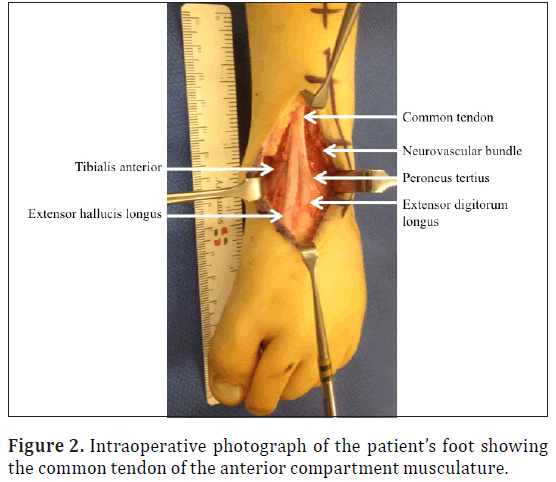 Figure 2: Intraoperative photograph of the patient?s foot showing the common tendon of the anterior compartment musculature.

The neurovascular bundle was seen to run on the lateral aspect of the common tendon in the leg and was covered by peroneus tertius and extensor digitorum longus on the dorsum of the foot.

Without any excursion of the tendon a transfer of tibialis anterior would only provide a static stabilizer to clubfoot recurrence at the cost of preventing active plantarflexion and thus normal gait. We therefore released tibialis anterior from its insertion and freed the adhesion of the common tendon to the anterior tibia, but did not perform a transfer.

The wounds were closed and healed without complication. The foot was serial casted to the normal position.

This case presents a unique case of CTEV caused by a previously undocumented anomaly of a common anterior leg compartment tendon.

Embryologically, the lower limb starts to develop from an antero-lateral limb bud of lateral mesodermal cells towards the end of the 4th week of development [4]. During the 7th week of gestation mesenchymal cells migrate into the limb bud to form muscles [4]. As the limb bud elongates the muscles split into compartments and the individual muscles separate under the influence of connective tissues [4].

Whilst multiple congenital anomalies of the pediatric lower limb have been described, including abnormal musculotendinous insertions and agenesis of individual muscles, no prior literature has documented a common tendon of the anterior compartment musculature [3]. However, one could hypothesize that the anomaly described in this case has occurred because of a failure of the connective tissues to separate the anterior compartment muscles during early intrauterine life.

Congenital talipes equinovarus or clubfoot is a congenital abnormality resulting in hindfoot equinovarus, midfoot cavus and forefoot adductus. Most infants have no identifiable cause for CTEV and in otherwise healthy infants are thought to be due to a multifactorial system of inheritance [1,2]. In other cases identifiable causes are found such as oligohydramnios, congenital constriction rings, teratogenic agents, genetic and cytogenetic abnormalities.

In this case, the common tendon was adhered to the anterior distal tibia resulted in a loss of active ankle dorsiflexion due to a lack of anterior compartment muscular function and weakness of ankle eversion due to the lack of peroneus tertius function. With normal power of triceps surae her hindfoot was drawn into equinus, while her tibialis posterior drove the hindfoot further into equinus as well as varus and caused her forefoot adductus. Her flexor hallucis longus and flexor digitorum longus drove the midfoot into cavus and thus this child presented with a clubfoot.

With a multitude of causes for clubfoot, this case emphasizes the importance of preoperative evaluation. Whilst we were unable to demonstrate active dorsiflexion, we were able to illicit anterior compartment musculature contraction.

Further imaging may have aided in our preoperative diagnosis, however at the time it was felt that there may have been some tethering, which once freed would permit a successful tendon transfer, thus operative exploration was performed.

In future we would advocate considering further preoperative imaging. However, this case does not aim to present the optimal management of this condition, but rather to present an interesting anomaly that clinicians treating these patients should be aware of.