Frequency of cardiac rhythm disorders during heart failure in the cardiology department of The National Ignace Deen Hospital, Conakry

Introduction: Cardiac rhythm disorders are abnormalities in the cyclic variation of cardiac contractions.

The development of sustained, rapid, or slow supraventricular rhythm disturbances may be responsible for heart failure with or without underlying heart disease.

The objective was to determine the frequency of heart rhythm disorders in heart failure.

Methodology: This was a prospective cross-sectional study of descriptive type lasting six (6) months from September 1, 2016 to February 28, 2017 conducted in the Cardiology Department of the Ignace Deen National Hospital of Conakry.

There were 40 women and 38 men with a sex ratio M/F=0.95). The mean age of the patients was 54.38 years with extremes of 12 and 90 years. Advanced age, dilated OG were the main predictors of CRT occurrence. Atrial fibrillation was the most encountered heart rhythm disorder with a rate of 62.82%.

Conclusion: Rhythm disorders during heart failure are a frequent pathology in the Cardiology Department of the Ignace Deen National Hospital. Their prevention necessarily involves the management of risk factors associated with cardiovascular pathologies, particularly in the elderly.

Cardiac arrhythmias or arrhythmias result from an alteration in the location and/or frequency of the electrical impulse within the heart. They can also be the result of disordered diffusion within the conduction system, resulting in abnormal heart rate and rhythm [1]. The onset of sustained, rapid, or slow supraventricular arrhythmias may be responsible for heart failure with or without underlying heart disease [2]. Heart Failure (HF) is a condition in which an abnormality in myocardial function is responsible for the inability of the myocardium to provide sufficient blood flow to meet the body’s energy needs. This failure may be the reflection of an abnormality in the contraction of the heart muscle (systolic dysfunction) or filling (diastolic dysfunction) see both mechanisms [3]. Despite recent therapeutic advances, heart failure affects approximately 23 million people around the world. Each year, an estimated 1.1 million sudden cardiac arrests (350,000 out of hospital and 200,000 in hospital) occur in Europe and the United States [4].

In France, 120,000 new cases are recorded per year; the incidence increases with age, dropping from 4% in men and 3% in women aged 55 and 64 to 50% in men and 85% in women aged 85 to 94 [5]. In several English-speaking African countries, it represents 3% to 7% of admissions according to data from hospitalization statistics [6]. Also, a recent study covering 7 countries in French-speaking Africa reported a proposal of 27.5% of patients hospitalized in emergency for an outbreak of HF in NYHA class 4 [7]. In Guinea, the various outlines of the subject are still poorly understood. However, there have been very few studies devoted to cardiac arrhythmias. The objective of this study was to determine the frequency of cardiac arrhythmias during heart failure in the Cardiology Department of the Ignace Deen National Hospital in Conakry.

The study was performed in the Cardiology Department of the Ignace Deen National Hospital (Figures 1 and 2). It was prospective of a descriptive type lasting six (6) months, from September 1, 2016 to February 28, 2017 and concerned all patients hospitalized for heart failure associated with cardiac arrhythmias during the study period. Included in the study were all patients hospitalized for heart failure with a cardiac arrhythmia confirmed by the electrocardiogram, having performed the cardiac Doppler ultrasound and/or the blood ionogram. Not included are all patients hospitalized for heart failure without a cardiac arrhythmia. The data were collected using a pre-established individual survey form and the counting was manual and analyzed by the epi info 7.2 software. 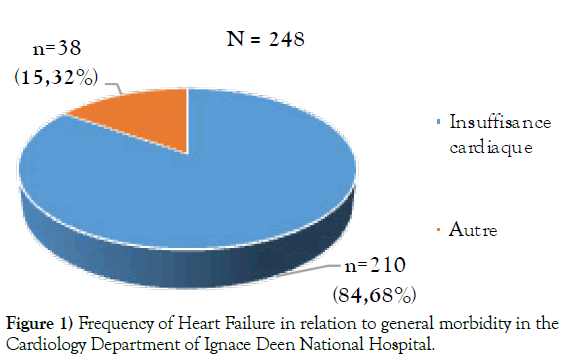 Figure 1: Frequency of Heart Failure in relation to general morbidity in the Cardiology Department of Ignace Deen National Hospital. 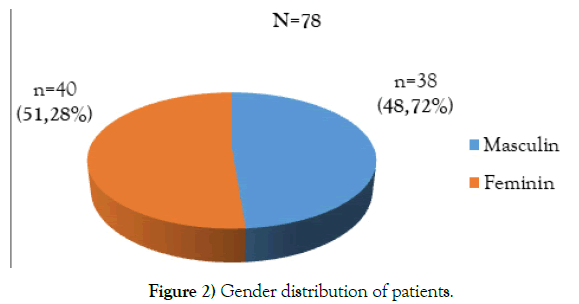 The study involved 248 patients hospitalized in the cardiology department of the Ignace Deen National Hospital, 210 of whom had heart failure, for a hospital rate of 84.68%. Cardiac arrhythmias occupied second place among all cardiovascular pathologies with a number of 78, i.e a rate of 31.45%, after hypertensive heart disease (33.87%) (Table 1). The most represented age group was that of 60-71 years followed by that of 72-83 years with respective rates of 28.21% and 21.79%. The mean age of the patients was 54.38 years with extremes of 12 and 90 years (Table 2). This high frequency of heart rhythm disturbances could be explained by the fact that, according to the literature, advanced age is a risk factor for the onset of cardiovascular diseases. The female sex was the most represented with a frequency of 51,28% against 48.72% for men, i.e. a sex ratio M/F of 0.95 (Table 3). Our result is superimposable on that found by N’GUISSAN N in his doctoral thesis, which reported a female predominance with a frequency of 54.1%, or a sex ratio of 0.8 [8,9]. IKAMA in his doctoral thesis found a female predominance with a rate of 56.1% of cases, i.e a sex ratio of 0.78 [10]. In our study, dyspnea and palpitations were the functional signs found with respective numbers of 77 and 71, i.e 98.71% and 91.02%. Our results are different from those found by DANNOUNI Y in his doctoral thesis which found that palpitations and dyspnea were the most common functional signs with frequencies of 48% and 40% respectively [11]. Rhythm disturbances, crackling rales and lower limb edema were the most common physical signs with respective rates of 85.89; 84.61 and 70.51% (Table 4). ABDERRHAMANE found 78.8% for tachycardia and 61.7% for crackles, while DI BERNARDO found a predominance of crackles in 85% of cases [12,13]. OG dilation and advanced age were the main predictors of the occurrence of cardiac arrhythmias with respective rates of 60.25% and 55.12% followed by arterial hypertension and alteration of the left ventricular ejection fraction with percentages of 55.84% and 47.43% (Table 5). In our study, atrial fibrillation and ventricular extra systoles were the most common heart rhythm disturbances with respective rates of 62.82% and 17.94% (Table 6). N’GUISSAN N in his doctoral dissertation found complete atrial fibrillation (AC/AF) arrhythmia to be the most common supraventricular heart rhythm disorder on ECG in 86.5% [9]. IKAMA observed that atrial fibrillation was the most common rhythm disorder with a rate of 39.51% followed by atrial tach systole (6.17%) [10].

TABLE 6 Distribution of patients by CRT

Rhythm disturbances in heart failure are a common pathology in the Cardiology Department at Ignace Deen National Hospital. The study involved 78 patients who were in heart failure with arrhythmias (40 women versus 38 men with a sex ratio M/F=0.95). The average age of our respondents was 54.38 years with extremes of 12 and 90 years. Older age and OG dilation were the main predictors of the occurrence of CRTs. Atrial fibrillation was the most common heart rhythm disorder with a rate of 62.82%. Their prevention necessarily involves taking charge of the risk factors associated with cardiovascular pathologies, more particularly in the elderly.