Citation: Tessema CB. Fusion of the short lateral rotators of the thigh and posterior fibers of the gluteus medius with a variant course of the common fibular nerve. Int J Anat Var. 2020;13(1): 71-72.

During the dissection of an 80-year-old male cadaver, fused tendons of four lateral rotators of the thigh and the posterior portion of gluteus medius muscle that attached to the greater trochanter of femur through a common tendon were detected. The common fibular nerve coursed between the posterior fibers of gluteus medius and piriformis muscle and merged with the tibial nerve in the subgluteal space. Variations of the lateral rotators of the thigh and the course of the sciatic nerve divisions is widely reported but no report similar to this case has been found. The addition of the posterior fibers of the gluteus medius to the lateral rotators on the common tendon would probably reinforce the ability of these muscles in laterally rotating the thigh. Such variation of attachment with variant course of the common fibular nerve could also be associated with different pain syndromes in the gluteal region.

The short lateral rotator muscles of the thigh that belong to the deep group of gluteal muscles, include the piriformis, superior gemellus, obturator internus, inferior gemellus, and quadratus femoris. All of these muscles, with the exception of quadratus femoris, attach directly or indirectly to the greater trochanter. Sometimes, the posterior edge of the gluteus medius may blend with the piriformis muscle [1]. Frequently, the superior and inferior gemelli fuse with the corresponding sides of obturator internus tendon before it inserts to the greater trochanter forming a conjoint tendon [1,2]. This gemelli-obturator internus complex was called as triceps coxae muscle [2]. The tendon of piriformis muscle can be partially blended with the common tendon of obturator internus-gemelli complex [3]. 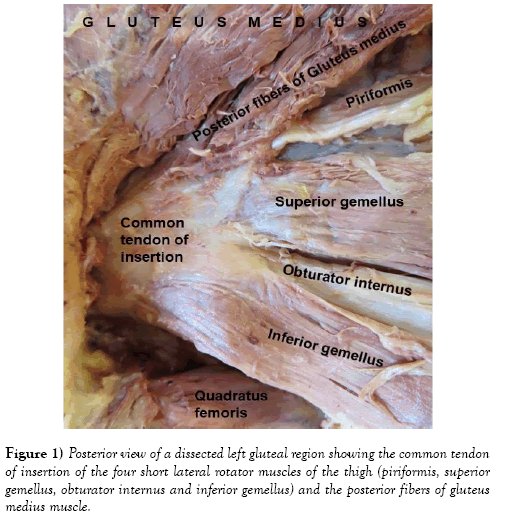 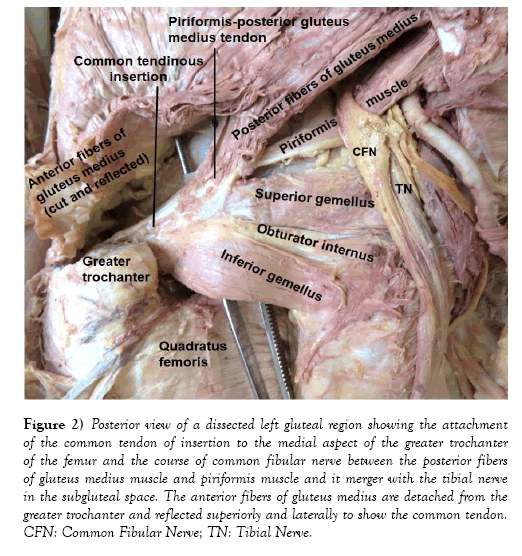 Figure 2: Posterior view of a dissected left gluteal region showing the attachment of the common tendon of insertion to the medial aspect of the greater trochanter of the femur and the course of common fibular nerve between the posterior fibers of gluteus medius muscle and piriformis muscle and it merger with the tibial nerve in the subgluteal space. The anterior fibers of gluteus medius are detached from the greater trochanter and reflected superiorly and laterally to show the common tendon. CFN: Common Fibular Nerve; TN: Tibial Nerve.

During total hip arthroplasty, the short lateral rotators of the thigh are always at a risk of damage and their detachment during this procedure is inevitable which ultimately would affect postoperative hip stability [9]. Based on this, it can be assumed that a broad variation like in this case report, carries a higher risk of damage and injury during various clinical procedures in this region. Therefore, improvement of anatomic knowledge of the short external rotators of the thigh will assist surgeons in accurately locating these structures [9].

The posterior portion of the gluteus medius muscle, on the basis of its fiber direction and its attachment to the medial aspect of the greater trochanter of the femur via the common tendon, can be considered as an addition to the lateral rotators and probably reinforces the ability of these muscles in laterally rotating the thigh.

In conclusion; even though there is a wide variation of the relationship between the short external rotators of the thigh and the course of the sciatic nerve and its divisions, no report similar to this case involving the gluteus medius, the short lateral rotators and the common fibular nerve has been found. These variation of attachment of the gluteal muscles with variant course of the common fibular nerve could be associated with different pain syndromes in the gluteal region and the awareness of such a variation would help in the interpretation of various imaging findings, in carrying out anesthesiologic, surgical and other clinical procedures to diagnose and treat problems of the gluteal region. It is particularly important in posterior approach hip replacement therapies (arthroplasty) to avoid iatrogenic injury or damage of these structures that would affect the treatment outcome, which consequently affects patient’s quality of life.

I would like to thank the donor and his families for their consent for research and publication and the department of biomedical sciences for its support. I am also grateful to Denelle Kees and Chelsey Swanson for their assistance during the dissection of this cadaver.