Precise anatomical knowledge of the great vessels of the neck and thorax and their variations is essential for safe anesthesia, intensive care practice, placement of central venous catheters, pacemaker implantation using the transvenous approach, etc.

Occurrence of persistent left superior vena cava (SVC) with absent right SVC are venous system variations that could impede such procedures. Persistent left SVC in 80% of the cases is found to co-exist with the right SVC [1]. Its association with absence of right SVC is unusual.

In the present case we report multiple venous variations occurring simultaneously in the same cadaver.

During routine dissection of the thoracic region, in an 45-year-old formalin fixed male cadaver:

• The SVC was absent on the right side (Figure 1). • just posterior to the manubrium sterni to join the left brachiocephalic vein behind the 1st costo-sternal joint to form the left SVC (Figure 2). 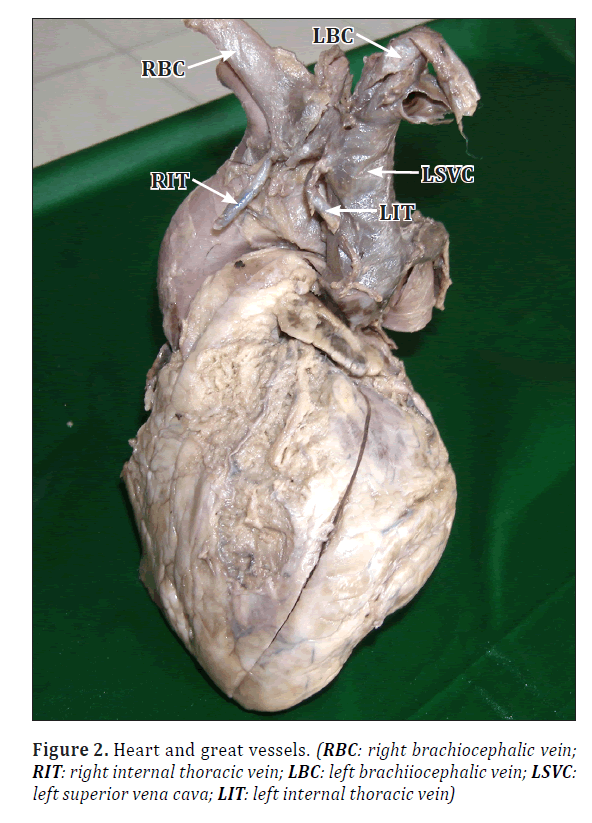 • Right and left internal thoracic veins were draining  into the right brachiocephalic vein and the left SVC, respectively (Figure 2).

• The left SVC was draining into the right atrium via a dilated coronary sinus (Figures 3, 4). • The azygos vein drained into the accessory hemiazygos  vein, which was arching above the root of left lung and draining into the left SVC (Figure 4).

Dissection of the thoracic and abdominal regions revealed no evidence of transposition of viscera.

To understand the present variations the normal development of the related venous system needs to be reviewed. In the 5th week of intrauterine life 3 pairs of major veins can be distinguished draining into the two horns of sinus venosus [2] (Figure 5). Formation of supracardinal veins and anastomoses between the right and left side veins is shown in Figure 6. Final development with shunting of blood from left to right is shown in Figure 7. Normally as observed in Figures 5, 6 and 7 large portions of left cardinal veins are obliterated during embryonic life due to left-to-right shunting of blood. With the regression of rest of right posterior cardinal vein, the azygos vein via the post-aortic anastomotic channels (Figure 6) drained into the accessory hemiazygos vein.

In 1954, 46 cases of persistent left SVC were reviewed, out of which, 65% cases showed double SVC, 39% showed transposition of thoracic and abdominal viscera and many cases had associated conditions like Fallot’s tetralogy, tricuspid atresia and Eisenmenger’s complex [3].

In 1998 double SVC was detected during central venous catheterization of a 3-year-old boy with no other related structural variations observed [1].

A case of persistent left SVC was discovered in 2001 after insertion of a pulmonary artery catheter [4].

In 2004 a study was carried out on 10 patients of persistent left SVC where 30% cases were found to be having associated congenital heart disease, 30% cases had absent right SVC and a dilated coronary sinus and 50% cases showed absence of left brachiocephalic vein [5].

A study carried out in 2007 on 152 cases undergoing surgery for congenital heart disease, reported 3% cases having a persistent left SVC and dilated coronary sinus, one of these cases showing absence of right SVC [6].

Finding of persistent left SVC was reported in 2007 in a 60-year-old cadaver where a narrow communicating vein connected it to the right superior vena cava. The left SVC drained via dilated coronary sinus into the right atrium [7].

A left SVC with dilated coronary sinus was detected in an accident victim with thoracic injuries in 2008 [8].

The present case is clinically important because left SVC can impede manipulation of a cardiac venous catheter in or through the coronary sinus which can result in hypotension, angina or cardiac arrest [1]. Left SVC can also cause difficulties in placing of a pulmonary artery catheter or pacemaker in the right ventricle because of the orientation of the coronary sinus [1]. There may be higher incidences of cardiac arrhythmias in these patients [7]. The cardiac catheter may pass through the dilated coronary sinus during exploration of the right atrium thus appearing to pass right across the heart and being mistaken for presence of an atrial septal defect [3]. Venous variations often complicate mediastinal surgeries with intraoperative haemorrhage due to damage to variant large vessels having life-threatening consequences [9]. Occurrence of left SVC can be indicative of congenital heart malformations. Left SVC may not always produce symptoms, therefore going undetected [3].

Despite the clinical importance of these venous variations they often go undetected because there is no alteration in the hemodynamics of patients with agenesis of right SVC and persistent left SVC and such patients being asymptomatic. [10] In cases where there is double SVC the persistence of left SVC may go undetected as most central catheters are placed on the right [1].

These variations can be detected by a radiological picture of heart showing straight borders on both sides and a broad pedicle [3] and by angiocardiography.

An attempt has been made in this article to explain the possible embryological basis for the venous variations observed and their clinical significance. Study of such cases not only increases awareness of their clinical implications in the present scenario but also has high educational value for students of embryology.