This is a case report of an inferior vena cava (IVC) variation found during organ recovery for transplantation. Some considerations about anatomy and embryology, based on bibliographic research data, as well as the clinical implications for surgery, especially in the area of transplantation, are also presented.

In the study of anatomy, the definition of normal can be divided into an idealistic or statistical concept. According to the idealistic concept, normal is the best or best prepared to develop a function. In the statistical concept, normal is the most frequent, that is, the one that occurs in most cases and serves as a basis for anatomical description. However, in the organ systems, there are small morphological differences that do not impair function; they are called anatomical variations [1].

Variations have been reported in all systems of the human body, including the vascular system; e.g., events related to the inferior vena cava (IVC). Anatomical variations related to the normal course of the IVC have already been described in the literature, with a growing increase in reports described in imaging examinations, during endovascular procedures or laparoscopic surgeries. These variants should be differentiated from pathologies, especially lymphadenopathies, in imaging studies, since the presence of variants can hinder surgical or interventional procedures in the retroperitoneum [2].

This study reports a case of an anatomical finding verified during an abdominal organ recovery procedure. A bibliographic survey was conducted in the Scielo and PubMed databases, and anatomy and embryology textbooks were consulted.

During organ recovery from a 26-year-old male multiple-organ donor, an important anatomical and surgical finding was observed: the presence of IVC with initial course to the left of the midline and, above the point of entry of the renal veins, crossing the aorta and continuing its normal path, posteriorly to the liver (Figure 1). 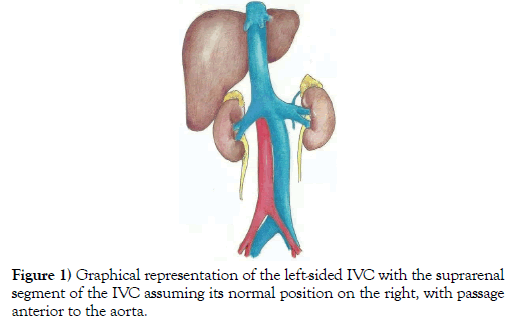 Figure 1: Graphical representation of the left-sided IVC with the suprarenal segment of the IVC assuming its normal position on the right, with passage anterior to the aorta.

The common iliac veins converged at the level of the sacral promontory to form the IVC to the left of the aorta. This vessel ascended along the abdomen and curved to the right at the level of the superior mesenteric artery, forming an angle of about 150°. Its passage from left to right occurred anteriorly to the aorta and posteriorly to the duodenum, after draining the renal veins, which were normal, assuming, from there, its topography on the right, lying in the groove for vena cava in the liver (Figure 2). 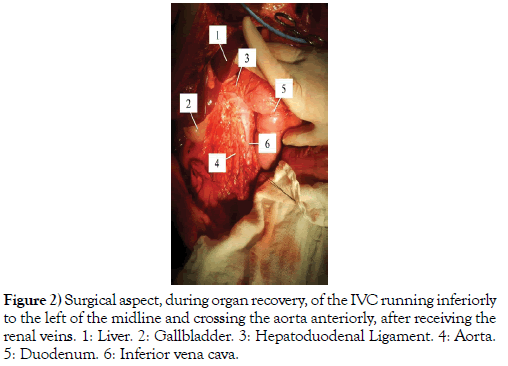 Figure 2: Surgical aspect, during organ recovery, of the IVC running inferiorly to the left of the midline and crossing the aorta anteriorly, after receiving the renal veins. 1: Liver. 2: Gallbladder. 3: Hepatoduodenal Ligament. 4: Aorta. 5: Duodenum. 6: Inferior vena cava. In adults, the IVC has an abdominal course that begins anteriorly to the L5 vertebra, after the union of the common iliac veins, approximately 2.5 cm to the right of the median plane. The IVC ascends, runs over the right psoas major muscle and lies to the right of the aorta. Finally, the IVC leaves the abdomen through the vena caval foramen in the diaphragm, entering the chest at the level of the T8 vertebra [6].

Left-sided IVC, or transposition of IVC, occurs when, embryologically, there is regression of the right supracardinal vein with persistence of the left supracardinal vein, which is the opposite of what normally occurs, characterizing a variant of the infrarenal segment, with IVC’s final position to the left of the midline. The prevalence of this anatomical variation in the population is about 0.2% to 0.5%. In this case, the IVC receives the left renal vein, crosses the midline to the right, drains the right renal vein, and assumes the normal course of the suprarenal IVC [5,7]. Other reported variations in the formation of the IVC, with their possible embryological origins, are:

It results from the persistence of both supracardinal veins [5,7].

There is persistence of the thoracic and lumbar parts of the left supracardinal vein and left subsupracardinal anastomosis, along with failure of formation of the right subcardinal-hepatic anastomosis. Associated with this, the right renal vein and the right IVC meet and cross the aorta posteriorly to join the left-sided IVC, which continues cranially as hemiazygos vein [7].

There are some reports in the literature about this variation, but there are controversies regarding the hypothesis of its embryological formation [8-10].

Study and knowledge of normal anatomy and its variations are essential for the success of any surgical or hemodynamic procedure, especially for transplant surgeries, as organ recovery is a dissection lesson, with the organs and their vascularization totally individualized. During kidney recovery, for example, the surgeon must properly isolate the renal vessels, identifying vascular variations, especially the multiplicity of renal arteries, so that the arteries are properly anastomosed to ensure a satisfactory perfusion of the kidney in the recipient. In liver recovery, the surgeon must pay attention to the anatomy of the portal vein, variations of the hepatic artery and of the celiac trunk, and hepatic drainage, because the variations, which are frequent, can determine the type of vascular reconstruction required for each specific case, for perfect functioning of the organ in the recipient. These vascular reconstructions are performed during organ preparation on the back table. Therefore, knowledge of the variations of the IVC will not only allow better surgical results, but will also be able to prevent inadvertent injuries with often disastrous results.