During a routine anatomy dissection session, clinical anatomy faculty identified several variations in the renal vasculature supplying the left kidney in an 81 year old male cadaveric donor. The abdominal viscera were reflected to allow dissection of the posterior abdominal wall. The abdominal aorta, superior mesenteric artery, inferior mesenteric artery, common iliac arteries, and renal arteries were visualized, and diameters and distances were measured to describe vascular variations. The average of three measurements taken by a single rater using a digital caliper (Mitutoyo America Corp., Aurora, IL) was recorded. The corresponding veins were dissected along their course to the inferior vena cava (Figure 1). 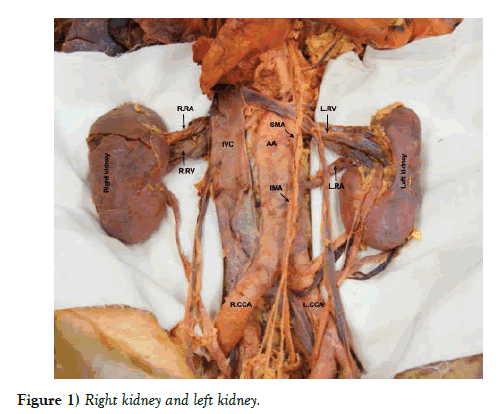 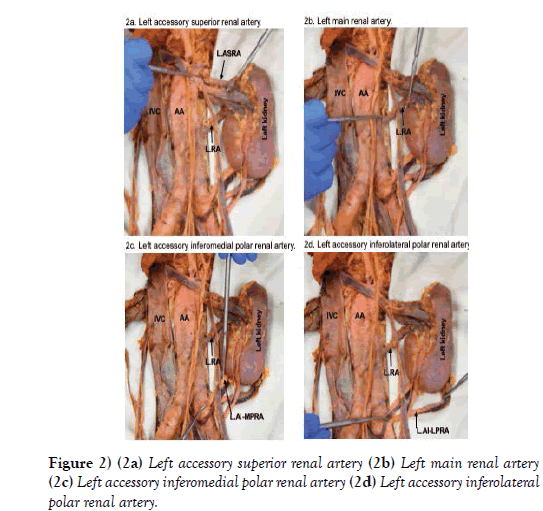 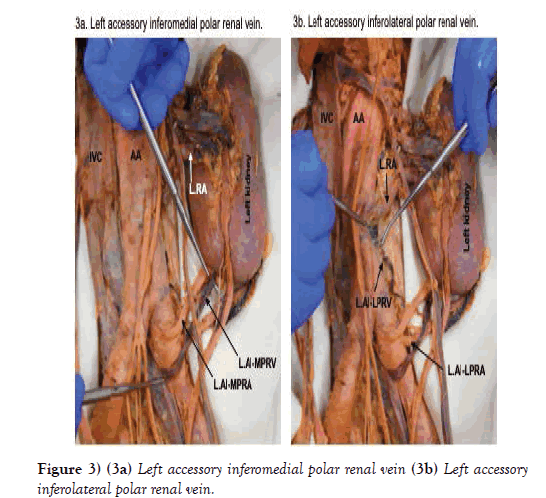 The left accessory inferolateral renal polar artery branched from the lateral aspect of the left common iliac artery, 23.3 mm distal to the bifurcation of the abdominal aorta (Figure 2d). It was 3.6 mm in diameter and coursed superolaterally toward the left kidney. As it did, the artery passed posterior to the ureter and testicular vessels before entering the posterior surface of the inferolateral pole of the left kidney. The corresponding vein exited the posterior surface of the inferolateral pole, coursed inferomedially where it bifurcated. Both branches passed posterior to the left accessory inferomedial renal polar artery, then immediately converged into one vein that changed direction and coursed superiorly and posteriorly toward the abdominal aorta where it emptied into a lumbar vein (Figure 3b).

Embryologically, the kidneys develop in the fetal pelvis and ascend to their final position on the posterior abdominal wall. During the ascent, blood vessels that supply the kidneys develop on the adjacent vascular structures such as the common iliac vessels and abdominal aorta. As the organs continue to ascend, new vessels develop while the preceding vessels regress until the ninth week of development when the kidneys reach the suprarenal glands [11]. Occasionally, the preceding vessels persist resulting in a varied vascular supply to the kidneys [12]. The presence of accessory renal vessels is not unusual and can appear in approximately 25% of the population [7]. While renal vascular variations have been described previously, the present case study describes a unique and less common variation that may warrant further study.

The presence of three accessory renal arteries is rare. It has been documented in only 0.2%-2.0% of specimens [7]. The persistent branches from the common iliac artery are uncommon, and as they enter the inferior pole of the kidney, it is important to note that these are end arteries. Damage to an end artery could result in an ischemic region of the kidney which it supplies [13]. This is a particularly important consideration of feasibility for a surgical team planning a transplant. Additionally, inferior polar arteries often supply the ureter. Damage of inferior polar arteries may lead to ureteric necrosis, paralysis, or urinary leaks [14].

To the best of our knowledge, this particular variation of the left renal vessels has not been previously documented. Dissemination of anatomic variations of the renal arteries is important for anatomists, clinicians, and surgeons. Vascular complications of vessels with normal vascular anatomy have been documented in 1.7% of retroperitoneal procedures [19]. Surgical procedures in the retroperitoneal space such as abdominal aortic aneurism repair, ureteric procedures, and renal transplant may result in damage of accessory renal vessels and an increase in vascular complications if they are not properly identified. Furthermore, the increased reliance on laparoscopic surgical procedures, which may limit the visibility of accessory vessels, emphasizes the importance of understanding potential variations of renal vessels to prevent iatrogenic vascular injury.

The authors would like to thank the donor for his selfless contribution to the education of others. The authors would also like to acknowledge Dr. Barton Anderson, A.T. Still University, for his photography assistance with this case report.