Multiple variations of extensor muscles in a single hand

Multiple variations of extensor muscles on one hand are very rare. We found in the right hand: 1. M. extensor digitorum was split into two separate muscles; 2. M. extensor pollicis et indicis; 3. M. extensor indicis et digiti medii. All their tendons were in the 4th compartment. The extensor digiti minimi muscle showed a doubled tendon. Besides, we classified the course of tendons in the fourth compartment into a superficial and a profound level. Moreover, we defined the innervation by dissecting the deep branch of the radial nerve having direct branches into the muscles. In our case the extensor pollicis longus muscle was double innervated by a branch of the deep radial nerve and also by a small branch of interosseus antebrachii posterior nerve.

The extensor muscles of the hand showed many variations in shape. Its of peculiar interest for surgeons in the field of tendon repair, transfer or reconstruction. In literature several forms of anatomical variations were described: variations of long muscles, supernumerary tendons and additional muscles [1].

In our dissection course we found in the right hand of an 81-year-old male multiple variations of extensor muscles. The left hand did not show any variations.

The extensor digitorum muscle (ED) was split into two portions.

One was originated at the lateral epicondyle of the humerus together with ECR brevis and runs on the radial side of the fourth compartment and adds to extensor apparatus of the index finger. This tendon was located radial to the tendon of the extensor indicis and digiti medii muscle (EIMe).

Moreover, there was an interdendinous connection to the tendon of ED of the middle finger. (Figure 1) We called this part extensor indicis longus muscle (EIL). 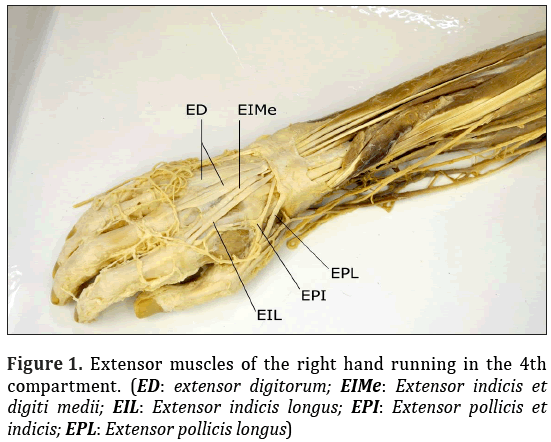 The second part arose from the ulna and the interosseous membrane. One tendon, separating in the half of the muscle, runs in the superficial level of the fourth compartment to the middle finger. Furthermore, there was a second tendon to the ring finger. Both tendons expanded and add to the intertendinous connection and inserted in the extensor tendon apparatus of the third and fourth finger (Figure 1).

Furthermore, we found a strong intertendineous connection to the tendon of the extensor digiti minimi muscle (EMi).

Each part was innervated by an own direct short branch of deep branch of radial nerve.

Additional we found an EMi with a doubled tendon (Figure 1). 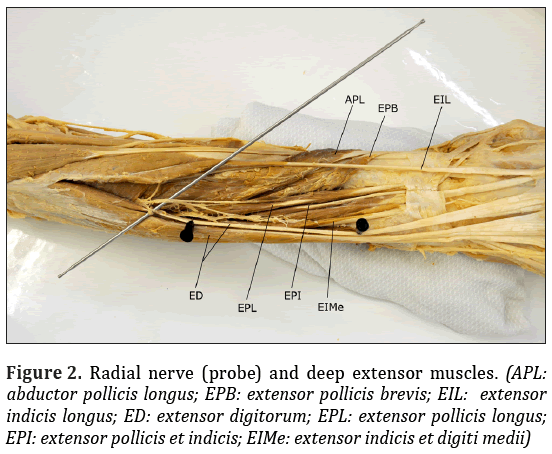 The muscle was innervated by a long ulnar branch of profound radial nerve.

Distal to the EPI the additional EIMe arose from the ulna and the interosseus membrane. Its belly ended directly in front of the fourth compartment of extensor retinaculum. From this point there were two tendons, one running to the extensor apparatus of the index finger adding deeper, ulnar to the tendon of ED. Some fibers inserted to the capsulate of the carpometacarpal joint. The smaller one leaded to the middle finger. The second tendon was covered from the tendon of ED and becoming expanded till insertion.

This muscle was also innervated by the long ulnar branch of deep branch of the radial nerve.

It is remarkable that the tendon of ED to the index intersects the tendon of EPI in the compartment. Both levels were divided by tendon sheaths. The deepest structure in compartment was posterior interosseus nerve (Figure 3). 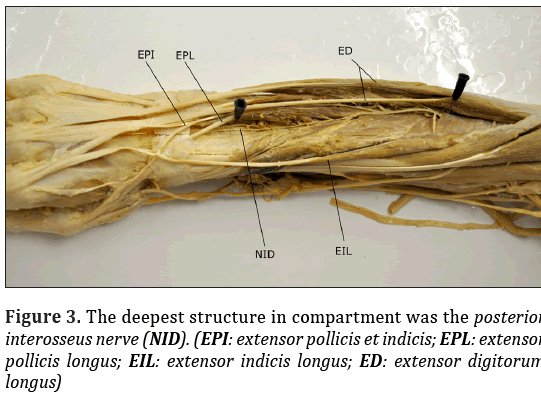 The dimensions of the variant muscles shown in Table 1.

Table 1: Dimensions of the variations of the extensor muscles of the forearm.

The muscle variations in the present case were individual described in literature but not combined on one hand.

Metha described an ED which accords to our case. He named this profound muscle extensor indicis [6].

Remarkable is, that humans in contrast to some vertebrates always have an EPL, EPB and EI when there is a complete EPI [1,3].

Based on classification systems of Yoshida [3], Komiyama [4] and Türker [5] we classified our EPI as Yoshida type 2b, Komiyama type 2b or rather Türker type 1e.

In contrast to the literature we could identify exactly the innervation (Figure 2 and 3).

The described variations of extensor muscles were asymptomatic in most cases. But the knowledge is important for surgical interventions.