The persistent Stapedial Artery is a congenital variant of vascular type which is very rare and may present as a mass pulsating in the middle ear. Awareness of this variant is important as it may complicate middle ear surgery e.g. myringotomy or stapes surgery. We present a case of 28 years old lady who visited the ENT OPD with complaints of impaired hearing and tinnitus on left side. On physical examination subtotal perforation of tympanic membrane was noted without ear discharge. Pure tone audiometry revealed moderate conductive deafness on left side. Otomicroscopic examination revealed a persistent stapedial artery coursing between the posterior and the anterior crus of the stapes, which was well visualized through the perforation. The tympanic membrane of the patient was surgically repaired without any complication.

The stapedial artery in human beings is an embryonic artery that disappears during 10th week in utero. In many vertebrates the stapedial artery persists in adulthood. The persistent stapedial artery (PSA) is a congenital malformation of vascular type which is very rare with a prevalence of 0.02% - 0.05% [1]. However a more recent study of 1000 temporal bones found an incidence of 1 in 500 [2]. Patients with PSA are mostly asymptomatic but cases of sonitus, retrotympanic pulsatile mass, hypoacusis and even neurosensory hearing loss have been reported [3]. The anomaly may be present in patients of Trisomy 13, 15, 21, neurofibromatosis, anencephaly, otosclerosis, paget’ disease and congenital immunodeficiency [4]. PSA may be accompanied with other abnormalities involving the ear ossicles especially stapes, the facial nerve and Aberrent Internal Carotid Artery [5]. Knowledge of the presence of persistent foetal arteries has a great clinical significance as it helps in early diagnosis and management of acute stroke, intracranial aneurysms and subarachnoid hemorrhage [5]. Identification of PSA may help in reducing complications in the management options of skull base surgeries involving complex reconstructions.

We present a case of 28 years old lady who visited the ENT OPD with complaints of impaired hearing and tinnitus on left side. On physical examination subtotal perforation of tympanic membrane was noted without ear discharge. Pure tone audiometry revealed moderate conductive deafness on left side. Otomicroscopic examination revealed a persistent Stapedial artery coursing between the posterior and the anterior crus of the stapes, which was well visualized through the perforation. The tympanic membrane of the patient was surgically repaired without any complication.

The foetal circulatory system first appears in the 3rd week of development as mesenchymal vascular islands coalesce [6]. A total of six aortic arches arise successively from the dilated region of the truncus arteriosus known as the aortic sac and course ventrally through their corresponding branchial arches into the ipsilateral dorsal aorta [6]. The six pairs of pharyngeal arch arteries are never all present at the same time. The anterior two pairs, in the mandibular and hyoid arches, disappear before the caudal two pairs, in the fifth and sixth pharyngeal arches have differentiated. Further, the fifth pair of arches is never well developed and their arteries are present for only a very short time [7]. In the fouth week, as the first and second aortic arches begin to involute, they leave behind dorsal fragments, the mandibular and hyoid arteries, respectively, and the portion of the paired dorsal aortae extending anteriorly from the third arch artery becomes the adult internal carotid artery. In the hindbrain region, the bilateral longitudinal neural arterie emerge, supplied at the level of the otocyst and acoustic nerve by the primitive otic artery, a remnant of a presegmental branch of the paired aortae. In the fourth to fifth week stage, the ventral pharyngeal artery, which parallels the internal carotid artery, arises in the area formerly occupied by the ventral aspects of the first and second arch arteries. This artery supplies the bulk of the first two pharyngeal bars and subsequently is involved in the formation of the stapedial and external carotid arteries. At the same time, the bilateral longitudinal neural arteries fuse to form the basilar artery [7].

At six weeks, as the transition from branchial phase to post branchial phase takes place, the stapedial artery appears as a small offshoot of the hyoid artery and passes through the stapes blastema to enter the mandibular bar; here the stapedial artery anastomoses with the distal remnant of the shrinking ventral pharyngeal artery [8]. The maxillomandibular division of the stapedial artery is the result of this anastomosis, and it divides into maxillary and mandibular branches. The proximal remnant of the ventral pharyngeal artery evolves into the root of the external carotid artery, whereas the common carotid artery develops from the ventral union of the third and fourth arch arteries [8]. 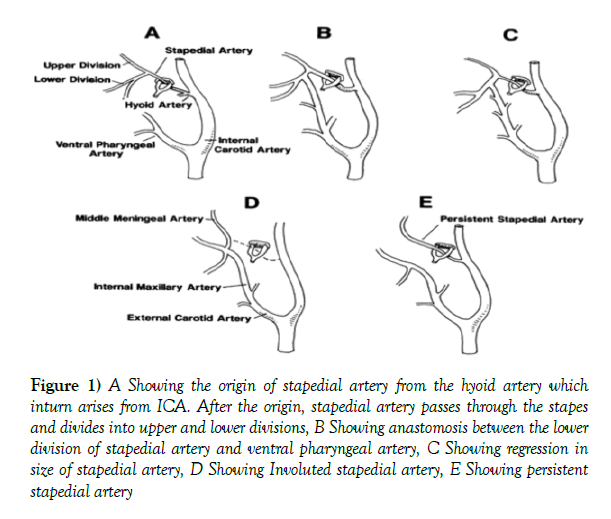 The stapedial artery may abnormally persist into adulthood, interfering with stapes operations. After passing through the stapes, just behind the cochleariform process there is a dehiscence through which it enters the facial nerve canal [12] and branches; bifurcation of the stapedial artery proximal to the stapes, with both branches penetrating the stapes blastema, may give rise to a three legged stapes [8].

The stapedial artery, either directly or indirectly through branch, may fix the developing internal carotid artery so as to pull it into the middle ear more posteriorly and laterally than it ordinarily would run [8]. In the literature there are reports of cases where the stapedial artery may either course through a canal parallel to the facial nerve or extend into such canal through a short segment [3]. Hyrtl reported Fifty six cases of PSA [13]. PSA is seen in 0.2-4.8 per thousand of human adults [14]. Most authors however observed a lower prevalence of PSA 1:10,000 (Figure 2). 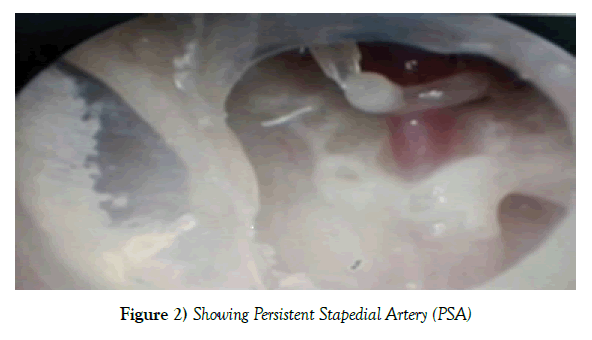 Persistent stapedial artery does not require treatment except in cases of pulsatile tinnitus, conductive hearing loss or in routine ear surgeries where the artery can be reasonably coagulated for which thorough knowledge of the anatomy and anastomosis of PSA are of great help in reducing complications.