Presence of one or more digit is called as polydactyly. Polydactyly may manifest singly or with other genetic disorders. We report a case of bilaterally symmetrical polydactyly with total 24 fingers, i.e. 6 fingers in each limb. In upper limb an extra digit was on ulnar side and was non-functional. In lower limb an extra digit was functional, having two phalanges, proximal phalanx articulating with an enlarged head of fifth metatarsal. Tendons of extensor digitorum longus, flexor digitorum longus and flexor digitorum brevis bifurcated and got inserted over the fifth and the extra digit. Abductor digiti minimi and flexor digiti minimi brevis were inserted on the lateral side of the extra digit. Every case of polydactyly should be investigated thoroughly for familial transmission and corrective surgical measures should be taken.

Presence of one or more extra finger or toe is termed as polydactyly. It is one of the most common congenital anomalies of hands and feet. According to Barsky, polydactylism is a manifestation of general phenomenon of duplication of parts [1]. In an Arabian tribe of Hyabites hexadactyly was so common that any child born with 5 fingers was regarded as a variant and was sacrificed [2]. Polydactyly can be classified into five types as cutaneous nubbin, pedunculated digit, articulating digit with fifth metacarpal, fully developed digit with sixth metacarpal and polysyndactyly [3]. Polydactyly may manifest singly or with other syndromes due to genetic disorders [4]. In this particular case we are going to study the structural arrangement in case of polydactylism.

Polydactylism was seen in a 72-year-old male cadaver. Our observations revealed 6 digits in each limb, i. e. 24 digits in all four limbs (Figures 1,2). It was a bilaterally symmetrical polydactyly. A dissection was performed to see whether any muscle or tendon attached over an extra digit. Figure 1: Photograph showing an extra digit on ulnar side of both hands. (Arrows: extra digits) 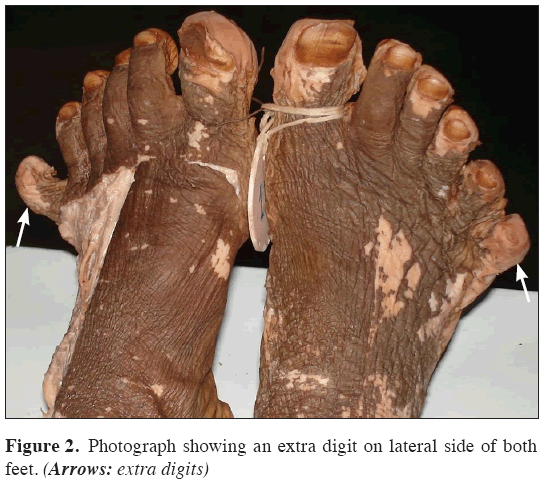 Figure 2: Photograph showing an extra digit on lateral side of both feet. (Arrows: extra digits)

Both the hands were having an extra digit on ulnar side, i. e. post-axial polydactyly. On radiographic examination it was observed that the extra digit was having two phalanges (Figure 3) and the proximal phalanx was seen articulated on the lateral side 5th metacarpal on both the hands. No extra or bifid fifth metacarpal was seen. On dissection of both the hands, it was observed that the extra digit was attached only by means of soft tissue. There was no muscular attachment over extra digit or a tendon inserting on a phalanx (Figures 4,5); i. e. type II polydactyly. Figure 3: X–ray of both the hands. (Arrows: phalanges of extra digits) 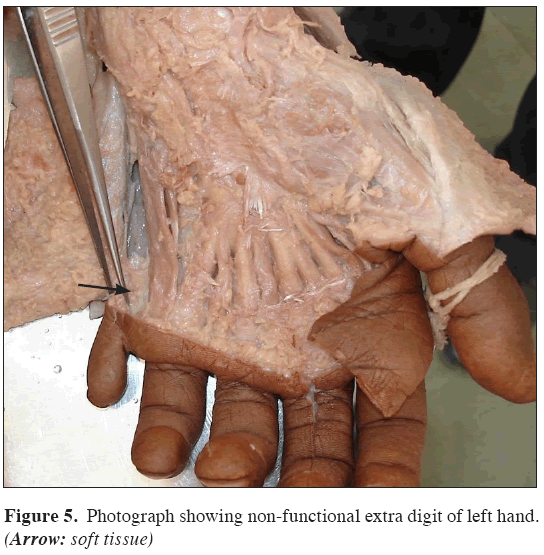 An extra digit was seen on lateral side of both feet. Radiographic examination of both the feet revealed a single fifth metatarsal with an enlarged head but is otherwise normal. There were two sets of phalanges, each set articulating with the fifth metatarsal (Figure 6). On dissection of dorsum of foot, it was observed that the tendon of extensor digitorum longus for the fifth toe bifurcated into two parts at head of fifth metatarsal, one part of tendon inserted over the fifth toe and the other part inserted over the extra digit (Figures 7,8). Dissection of sole of both the feet showed bifurcation of lateral most tendons of flexor digitorum brevis and tendon of flexor digitorum longus. After bifurcation both proceeded for their insertion on the fifth toe and the extra digit (Figure 9); i. e. type III polydactyly. Tendons of abductor digiti minimi and flexor digiti minimi brevis were inserted on the lateral side of base of proximal phalanx of the extra digit (Figures 10,11). Inherited cases represent only about 10% of polydactyly of hands and feet [8]. Polydactyly occurs usually due to some underlying genetic disorders in the form of autosomal dominant or recessive conditions. Recessive type is less commonly observed than dominant. Polydactyly, demonstrated as one of the presentation of autosomal recessive condition, Acrocallosal syndrome [4].An autosomal dominant inheritance, post axial polydactyly-progressive myopia syndrome was described in nine affected persons traced through four generations [8]. A Turkish family was traced through four generations showing polydactyly occurring singly and also in combination with cleft lip and cleft palate suggesting an autosomal dominant mode of inheritance [9]. Variability in genetic expression has been also observed. Karaaslan et al. reported mutation as a probable cause for the three cases of polydactyly in a family [10].

The importance of polydactyly lies in the fact that, such finding can be helpful in antenatal diagnosis to see its inheritance, counselling of such families and at times may be treated by surgical correction. Surgery can be planned according to needs, may be for cosmetic reason [11] or for maintenance of contour of the foot [12].

In case of polydactyly, familial transmission should be kept in mind and in future investigated for prenatal diagnosis. Counselling of such families should be warranted. A corrective surgery should be planned as soon as possible.