Accessory right anterior digastric muscles were found in three cadavers in the dissection lab of the Sanford School of Medicine during the 2012-2015 school years. These were dissected, photographed, measured, and then removed for weighing. Weights were used to hypothesize contractile forces for each muscle. It is important to continue to document these accessory muscles and their variations, as they are important landmarks in surgery and may be mistakenly identified on radiological scans.

The digastric muscles form the lateral borders of the submental triangle, and are a component of the suprahyoid muscle group [1]. They provide a solid base for the tongue, elevate the hyoid bone and larynx during swallowing, and assist in the production of speech [1]. The anterior digastric muscle originates off the digastric fossa of the mandible, while the posterior digastric muscle attaches to the mastoid notch of the temporal bone. Both muscles insert on an intermediate tendon anchored to the greater horn of the hyoid [1].

In a study of 146 digastric muscle variations, five types of variants were identified [4]. Using this system, the three cases discussed in the present study would all be classified as Type II variants, defined as two bellies with extra muscular slips connected to the mandible or mylohyoid muscle. Only 4 of the 146 muscles in the original study shared this classification, representing 2.73% [4].

This case report documents these 3 uncommon cases of accessory right anterior digastric muscles. The relevance of these case reports to radiological studies and surgeries in the submental region is discussed. In addition, these muscles were measured and weighed to determine the contribution that these muscles could have on an uneven pull of the jaw which could cause pathologies later in life. 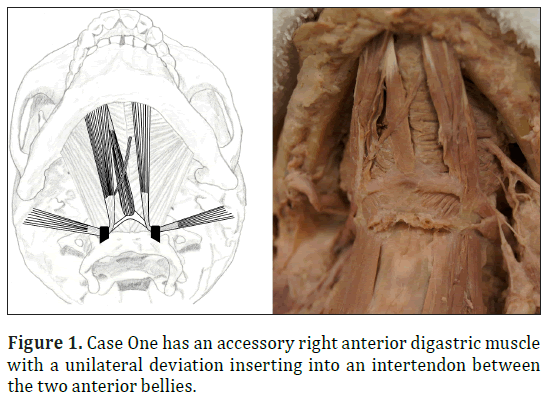 Figure 1: Case One has an accessory right anterior digastric muscle with a unilateral deviation inserting into an intertendon between the two anterior bellies. 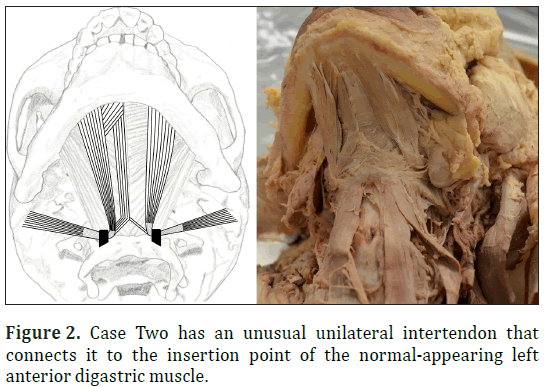 Figure 2: Case Two has an unusual unilateral intertendon that connects it to the insertion point of the normal-appearing left anterior digastric muscle. 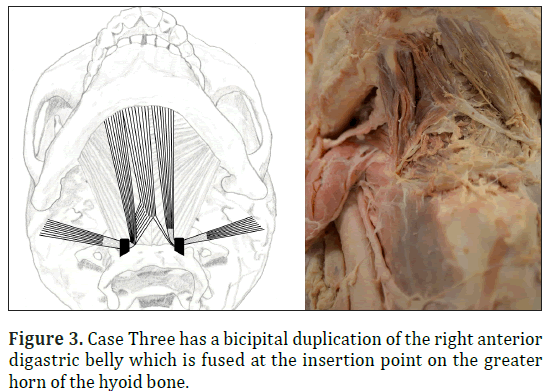 Figure 3: Case Three has a bicipital duplication of the right anterior digastric belly which is fused at the insertion point on the greater horn of the hyoid bone.

The muscles were dissected, cleaned, and measured. Muscles were removed with as little accompanying tendon as possible. The weights of each muscle were determined on a digital scale and recorded (Fig. 4). Case One was not weighed due excessive tissue damage and dehydration prior to data collection. 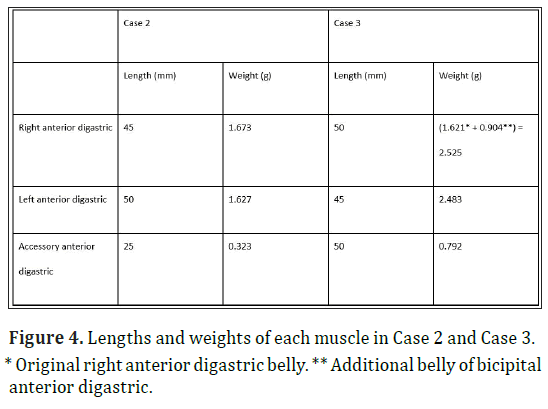 Accessory anterior digastric bellies likely arise from the first pharyngeal arch due to variations in embryological development [5]. Each of these cases have a unilateral accessory belly with intertendons which cross the midline. In addition, there are subtle differences such as the accessory muscle which crosses the midline in Case 1 and the bicipital muscle belly in Case 3.

These accessory muscles may have performed significant functions during life. Since each case was unilateral, there could be uneven wear on the surrounding structures, possibly creating undesirable pathologies. Accessory muscles could deviate the jaw to one side, which could cause bony erosions and a complete articular disc perforation in the temporomandibular joint (TMJ) over long periods of time [6]. Hyoid bone movement could also be effected, which could impact swallowing and lateral deviation of the larynx.

In order to examine this hypothesis, measurements of muscle mass and length were collected. In Case 2, there was a 5 mm difference in length between the original right and left anterior digastric muscles (Fig. 4). The weights differed by 0.046 g. In addition, the accessory muscle weighed 0.323 g and measured 25 mm. This would contribute to the overall weight and the direction of pull of the jaw from the right anterior digastric due to the similar insertion on the hyoid bone, which may cause the motion to unevenly prefer that side and possibly create pathology later in life.

Knowing the wide range of variability of these accessory muscles is important for surgeons and radiologists to avoid errors in identification during surgery, especially as the anterior digastric muscle is used as a landmark for identifying the lingual nerve and the duct of the submandibular salivary gland [7]. The muscle may also be mistaken for a pseudomass or and infarcted or metastatic lymph node on radiological scans [7]. Knowing the wide range of variations that are relatively common in this particular region is important to avoid misdiagnosis in scanning and surgery.

We would like to thank USD anatomy course of Fall 2015 for reporting the cases and performing initial dissections. The authors wish to thank individuals who donate their bodies and tissues for the advancement of education and research.