This study presents a rare case of azygos vein agenesis associated with hemiazygos vein agenesis. The observed anatomical variation consists in the existence of a large venous trunk located entirely to the left of the midline that receives drainage from the right and left posterior intercostal veins and drains into the superior vena cava by means of an arch. No vein in typical azygos or hemiazygos vein topography was observed. This anatomical variation may lead to clinical and hemodynamic repercussions, while also presenting anatomical and radiological importance regarding surgical planning concerning posterior mediastinal structures.

The venous thoracic drainage system, termed the azygos venous system, is classically described as being composed of the azygos, hemiazygos and accessory hemiazygos veins [1].

This system displays significant anatomic-functional importance, comprising a point of collateral circulation between the superior and inferior vena cava, essential in cases of venous obstruction [2].

From a clinical-surgical-radiological point of view, knowledge concerning azygos system morphology and topography is important for an adequate radiological analysis of the posterior mediastinum regarding surgical decisions, while also presenting potential as a catheter passage conduit [3,4].

Numerous anatomical variations have been described in this drainage system, the most prevalent consisting of variations in the route, formation or agenesis of the hemiazygos and accessory hemiazygos veins [5].

Anatomical variations in the azygos vein, however, are rarer. When present, they are related to this vein’s thoracic route, which may be located either to the right or above the midline, or even displaying a slight curvature that gently crosses to the left of the midline which then returns to the midline [3,4].

Azygos vein agenesis is considered an extremely rare description, with only three reports in the literature so far [6-8]. Some studies have analyzed a large number of cases and did not even consider the possibility of azygos vein agenesis [9].

An anatomical variation of the venous thoracic drainage system was observed during a posterior mediastinal dissection in an indigent African descent male cadaver of about 55 years old who died of causes unknown.

Following the opening of the thoracic cage, the posterior mediastinum was exposed after pericardium and heart-lung block extraction through sectioning of the descending aorta at its most proximal portion immediately after its arch, the superior and inferior vena cava and the trachea.

To better visualize all structures, the region was cleaned through delicate divulsion. The parietal pleura was removed, and the descending thoracic aorta, esophageal branches of the thoracic part of the aorta, esophagus, right and left vagus nerves, thoracic duct and sympathetic trunk were clearly evidenced (Figure 1). 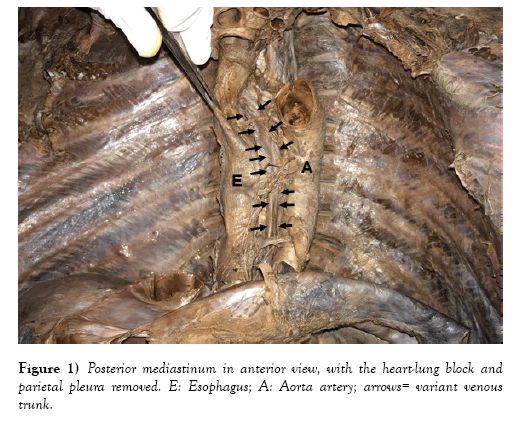 Subsequently, the esophagus was rebounded due to the difficulty in locating the azygos venous system. After cleaning the retroesophageal region, no classic venous drainage system was observed, but instead a large caliber vein (2.1 cm at its largest caliber along the thoracic path) located entirely to the left of the midline, in contact with the left lateral surface of the thoracic vertebrae, receiving dranage from posterior intercostal veins on both left and right sides and draining into the superior vena cava by means of an arch (Figure 2). In addition, no vein in azygos or hemiazygos vein topography was found. The corpse showed no clinical or anatomical variations in adjacent structures.

The azygos vein is classically described as a vein that ascends on the right side of the midline, following the right lateral face of the thoracic vertebrae from its appearance at the height of the diaphragm to its upper final portion [1]. Over the years, this concept has been revised and the azygos vein has been classified as a predominantly midline vessel [3].

On the other hand, few azygos vein variations have been described. When they are present, they refer to their anatomical pathway, either to the right or above the midline, or even displaying a slight curvature that gently crosses to the left of the midline which then returns to the midline [3,4].

However, variations such as the one described herein, in which no usual vein in azygos vein topography is noted, but instead a venous trunk located entirely to the left of the midline, which drains from the right and left posterior intercostal veins and drains into the superior vena cava by means of an arch (Figure 2), also associated with hemiazygos vein agenesis - most probably due to the suppression caused by the location of the variant venous trunk - has been rarely reported [6-8].

In similar reports, the authors infer that this constitutes azygos vein agenesis, since no vein is observed in the usual topography, only a large venous trunk to the left of the midline receiving drainage of the posterior intercostal veins of both sides, associated with the absence of a hemiazygos vein.

Another hypothesis would be that of an infrequently variant position of the azygos vein, since studies concerning this system assessing a large number of cases do not describe the possibility of agenesis, however, no variant path description was identical to the variation reported herein.

Some explanations described for azygos vein agenesis or trajectory variations include enlargement of the left atrial cavity, congenital or acquired topographic aorta and thoracic spine displacement, the presence of osteophytosis or even the coexistence of anatomical variations in spleen, superior vena cava or situs inversus. None of these morphological variants or any other explanation for the reported anatomical variation was found.

Knowledge on azygos vein path variations or its agenesis associated with the existence of a variant venous trunk is important due to potential clinical, surgical and radiological repercussions.

The important collateral circulation between the superior and inferior vena cava through the azygos venous system, comprises an alternative drainage route in case of obstructions, ensuring, even partially and temporarily, venous drainage to the right atrium. Therefore, variations in this system may lead to clinical impacts on the survival of some patients.

In addition, due to its location, diagnostic techniques may be implemented with access to the posterior mediastinal structures through the azygos vein, but variations in this system, including possible azygos vein agenesis, may make the technique difficult to apply.