An abdominal wall defect when associated with urological anomalies presents as prune belly syndrome. In prune belly variant, there are defects only in the abdominal wall muscles without associated urological defects. However, the rectus muscle is not involved in it. Isolated complete or partial absence of RA is rare [4]. The deficiency in supraumbilical part of RA is very rare and occurs in patches [3]. We report here such a case of unilateral isolated partial absence of RA and its relevance to various reconstructive surgical procedures.

During routine dissection of a male cadaver aged 75 years, the RA was not bilaterally symmetrical. On both sides, there were three tendinous intersections: one at the level of umbilicus, one at the level of xiphoid process and the third was situated between these two. The fleshy muscle fibers of RA of right side was replaced by aponeurosis in the supraumbilical part between the lower two intersections. The length of the aponeurotic part was 9.5 cm and the breadth was 4 cm (Figure 1a). The RA of left side was normal. Other anterior abdominal muscles were normal. The superior epigastric artery ran downwards on the posterior surface of the aponeurosis (Figure 1b). There were no trace of scars or adhesions indicative of previous surgery. There were no genitourinary malformations. The microscopic appearance of the aponeurotic part of the muscle with hematoxylin and eosin stain under 10x and 40x magnifications revealed atrophic skeletal muscle fibers admixed with extensive fibroblast and collagen (Figures 2a, 2b). 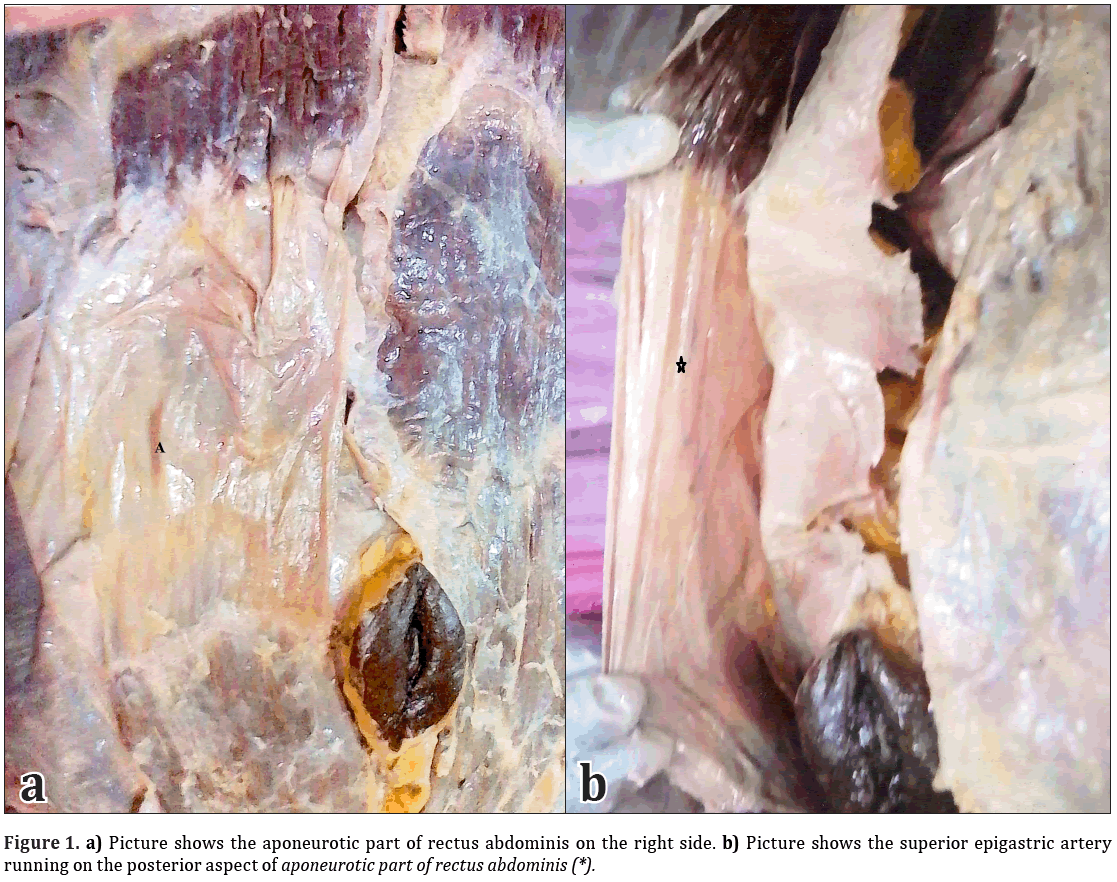 The musculoskeletal system of the trunk develops from the paraxial and lateral plate mesoderm. Segmental somites derived from the paraxial mesoderm organize to form the dorsolateral dermomyotome and the ventromedial sclerotome. The musculature of the anterior abdominal wall is derived from the myoblasts of segmental hypomere that differentiates from the myotome [5]. During development of anterior abdominal wall muscles, two plate-like mesenchymal condensations corresponding to undifferentiated RA and lateral abdominal muscles appear at five weeks. The segmental myoblasts of RA starts to differentiate at about six weeks from above the umbilicus and extends inferiorly. The abdominal wall muscles can be differentiated at this stage. At seven weeks, the supracostal part of RA is consistently present. The RA muscle is absent or very thin below the level of umbilicus until eight weeks. The sub umbilical increase in width and thickness occurs at nine weeks and becomes enclosed within the rectus sheath [6].

If the abdominal muscles are completely absent then the cause for it must have occurred before six weeks of gestation. The hypoplasia of muscle presenting as localized or patchy defects with dense fibrous tissue is suggestive of vascular compromise [3]. Llorca has stated that if nerve fibers which innervate the segmental muscles are absent then that part of the muscle is atrophied and replaced by a fibrous portion [7].

Gerard-Blanluet et al. have reported two patients with unilateral abdominal wall musculature deficiency and they have attributed this type of partial deficiency of RA to a localized defect in the development of somatic mesodermal mesenchyme during early embryogenesis [8]. Ger and Coryllos have reported a case of absence of anterior abdominal wall musculature with associated genitourinary anomalies. They suggest that early mesodermal defect of first lumbar segment frequently resulted in absence of the upper part of RA [9]. The unilateral supraumbilical deficiency of RA and its replacement with aponeurosis in the present case is more suggestive of a localized vascular deficiency that has resulted in fibrosis of muscle tissue.

This variation is significant in the light of the RA muscle being used in various surgical reconstruction techniques. The transverse RA musculocutaneous flap first described by Hartramp and Gandolfo in 1982 has now become an important reconstructive structure particularly with regard to reconstruction of breast following mastectomy. Next are the post traumatic reconstructions like augmentation of tissue loss on anterior thorax where the RA muscle is used in about 24% of surgeries [1]. The lower half of the RA is used for reconstruction after radical pelvic and perineal resections. Other procedures for which RA is used are correction of iatrogenic defects of diaphragm and inguinal reconstructions. Pedicle RA flap is used to treat complicated stress urinary incontinence and in reconstructive surgeries for chronic facial nerve palsy [10]. Bitto et al. have stated that pectoralis major and RA have the potential to be used as a replacement for diseased myocardium and as an outflow patch for hypoplastic ventricle [11].

The functional significance of the RA and its increasing usage in surgical procedures makes it necessary to be aware of the variations in the morphology of RA. RA flap has started becoming indispensable with so many reconstructive procedures using it, that knowledge about its variations becomes essential to plan an alternative procedure.