We present a rare case of aberrant left brachiocephalic vein and brachiocephalic artery, which crosses the trachea in the neck obliquely and closely related to lower border of thyroid gland. If not noticed while performing open or percutaneous dilatational tracheostomy or other neck surgeries, trauma to these vessel and subsequent hemorrhage can occur and may be fatal. Vascular compression of the airway causing obstructive symptoms can also occur due to this anomaly. In this report the case is presented along with its clinical significance.

Brachiocephalic trunk is described as the largest branch of the arch of the aorta, 4 to 5 cm in length, and arises from the arch’s convexity, posterior to the center of the manubrium sterni. It ascends posterolaterally to the right, at first anterior to trachea, then on its right. At the level of right sternoclavicular joint’s upper border it divides into right common carotid and right subclavian arteries [1]. At the lower part of neck the two common carotid arteries are separated from each other by a very narrow interval, which contains the trachea (Figure 1). 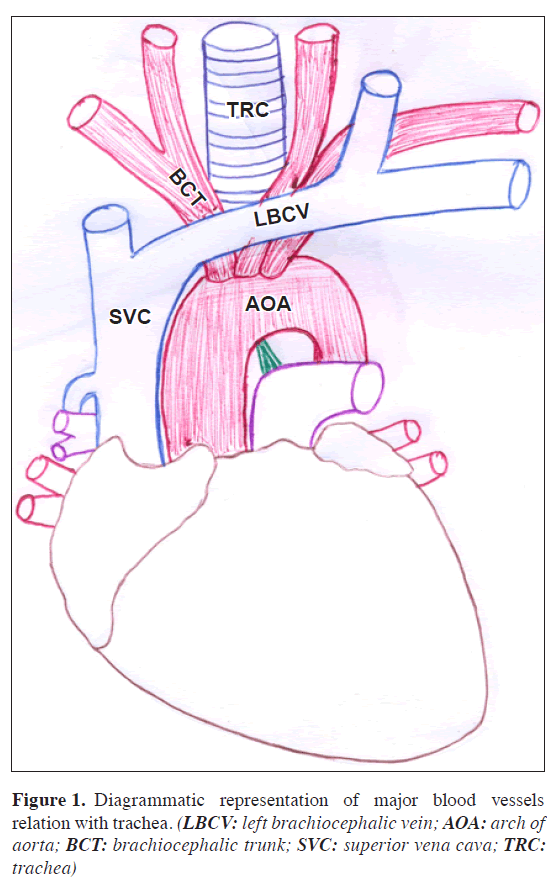 During routine educational dissection for undergraduate students in our department, this unusual origin of left brachiocephalic vein and brachiocephalic artery was observed in a male cadaver aged about 60 years.

In the region of anterior triangle of the neck after removal of skin, superficial fascia, deep fascia and the infrahyoid muscles, it was found that the left brachiocephalic vein and brachiocephalic artery both were crossing obliquely casein front of trachea just below the thyroid gland (Figure 2). 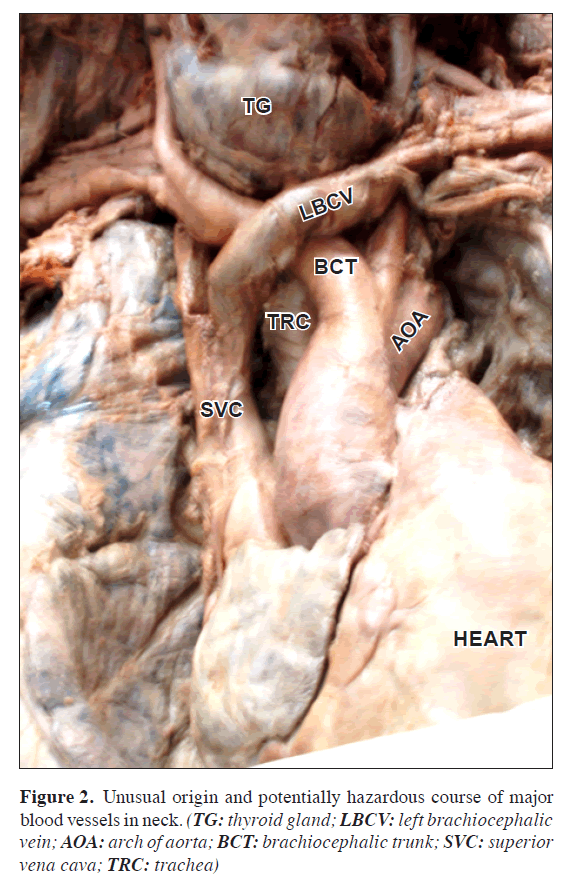 Such a variant is of vital significance during surgeries and even more important in PDT, which has gained wide acceptance due to its relative speed, simplicity and the ability to perform it at the bedside but the major disadvantage is the increased risk of peri-operative complication of severe bleeding.

The Authors are thankful and grateful to Dr. Satyam Khare Professor and head, Department of Anatomy and Dr. A. K. Asthana, Dean of the institute for their advice and support.