Accurate knowledge of the normal and variant anatomy of the axillary region is a prerequisite for correct diagnosis of the underlying pathology. The subsequent clinical procedures are of utmost significance for the vascular radiologists, surgeons and clinical anatomists. The vascular variations of the region should be well known [1]. The course and branching pattern of the axillary artery vary with race, sex and ethnic groups [1,2].

Axillary artery is the continuation of subclavian artery from the outer border of the first rib and continues as the brachial artery at the inferior border of teres major. Pectoralis minor muscle divides the artery in three parts, as the first part (proximal), second part (posterior) and third part (distal) to the muscle. As classically described in anatomical texts, axillary artery gives six branches; first part giving rise to superior thoracic, second part to thoracoacromial and lateral thoracic and the third part to subscapular, anterior circumflex humeral and posterior circumflex humeral arteries [3].

Various authors have described the variations in the branching pattern of the axillary artery [1,2,4–9]. During routine dissection of the upper limb, we came across a unique branching pattern, which has not yet been described in the literature. The variant observed is not only rare but seems to be relevant and significant for understanding the formation of the arteries of the arm.

The described arterial variation was found in the right upper limb of a cadaver, 70-year-old Indian male, during routine dissection in the Department of Anatomy, Rural Medical College, Loni. The history of the individual and the cause of death are not known. The topographic details of the arteries were examined by casual dissection and the variations were recorded and photographed.

3) Subscapular artery arose from the second part of the axillary artery (instead from the third part) and immediately after origin, divided in two branches. One branch ran downwards, after giving off a small circumflex scapular artery, and continued as thoracodorsal artery, while the other branch supplied the subscapularis muscle.

4) High origin of the radial artery was another interesting feature observed, which arose from the second part of the axillary artery. The course of the artery was superficial, running downwards and laterally, crossing the brachial artery and median nerve from medial to lateral side in the arm, without giving any branch. 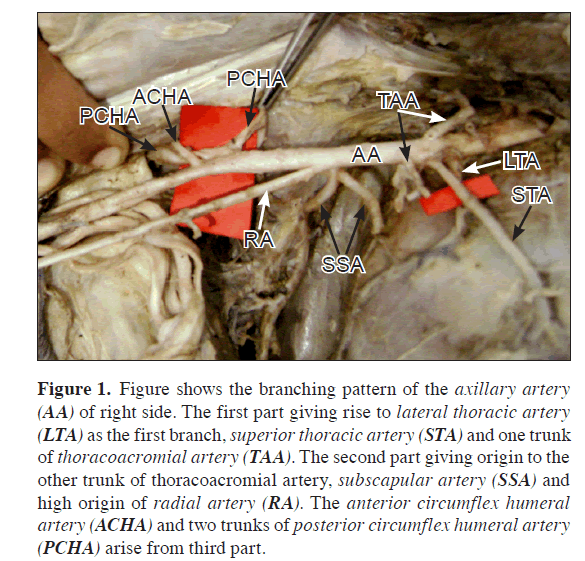 It is not uncommon to encounter variations of the axillary artery. Many authors have described variants in the course and branching pattern and the number of branches [1,2,4]. Patnaik et al., quoted that De Garis and Swartley (1928) in a study of 512 axillary arteries found 5-11 branches, the commonest number being eight [4], whereas the textbooks description gives the named branches as six [3]. We found eight branches, amongst those, additional branches were one extra branch each of thoracoacromial and posterior circumflex humeral artery.

Most frequently described variant is that, the axillary artery dividing into 2 trunks; one continuing as the brachial artery and the other trunk giving rest of the branches [6–9]. But two thoracoacromial trunks and two posterior circumflex humeral arteries and an early division of the subscapular artery; which are concurrently present in our case; is not yet described in the available literature.

Arterial anomalies in the upper limb are due to defects in embryonic development of the vascular plexus of upper limb bud. This may be due to arrest at any stage of development of vessels followed by regression, retention or reappearance, thus leading to variations in the arterial origin and course of major upper limb vessels [10].

The high origin and superficial course of the radial artery, as we reported, may be hazardous and vulnerable to injury during venepuncture and surgical procedures. On the other hand, its superficial course makes arterial grafting and cardiac catheterization easier. Therefore knowledge of both normal and variant anatomy of the region is a must for accurate diagnosis and treatment.