Acute coronary syndrome with ST segment elevation revealing a case of left ventricular non compaction: Is there a significant link between the two pathologies??

The left ventricular non compaction (LVNC) is a rare form of cardiomyopathy due to an abnormality in myocardial and endocardial embryogenesis in utero. We made a fortuitous diagnosis of this particular pathology using Doppler echocardiogram on a 58 year-old male patient. who presented with an ST elevation myocardial infarction. The treatment is based on symptomatic one. The prognosis seems to be unfortunate and the mortality rate is high based on the literature findings. This case is among rare cases found in the literature showing an association between LVNC and myocardial infarction with coronary artery disease.

Non-compaction of the left ventricle is a relatively rare, sporadic or familial congenital disease due to abnormal embryogenesis of the endocardium and myocardium in utero [1]. This entity was described by Engberding et al. in 1984 about of a young woman of 33 years [2]. The clinical manifestations are multiple. The treatment is that of the clinical symptoms, but the definitive treatment remains the cardiac transplantation in severe cases.

A 58-year-old patient, a chronic smoker with no history of heart disease, and no symptoms. Admitted for management of acute coronary syndrome with ST segment elevation prior to H12 chest pain onset. Upon admission to the emergency department, the patient was hemodynamically stable with a BP of 120 over 60 mmHg, a Heart rate of 80 bpm and a respiratory rate of 14 cycles per minute. His electrocardiogram showed a regular sinus rhythm, a heart rate of 80 bpm, a deviated heart axis on the left, no conductive disorder, no parietal hypertrophy, an ST segment elevation on antero septal leads with Q wave and negative T waves in apico lateral leads (Figure 1). During evolution there were paroxysmal atrial fibrillation and atrial flutter passages with isolated ventricular extrasystoles (Figures 2 and 3). Transthoracic echocardiography revealed a dilated, non-hypertrophied left ventricle with a severe systolic left ventricular dysfunction (LVEF at 26%), with akinesia of the anteroseptal wall, anterior, infero-septal and apical walls, a noncompaction aspect of LV by persistence of visible apex trabeculae and left ventricular spontaneous contrast appearance, left ventricular filling pressures were normal, with a dry pericardium (Figures 4, 5 and 6). 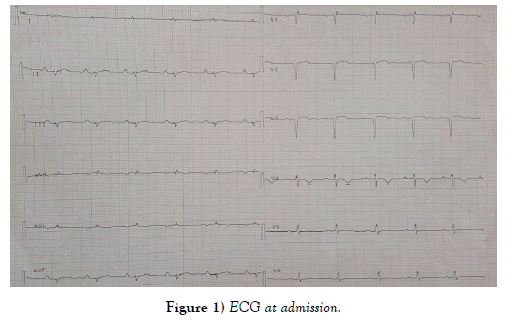 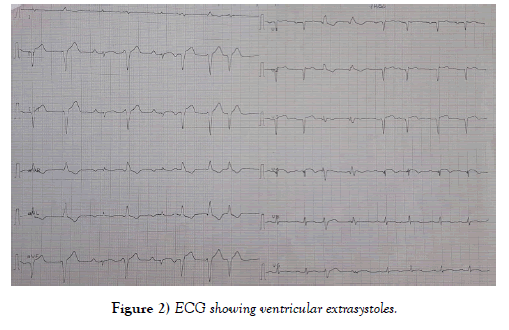 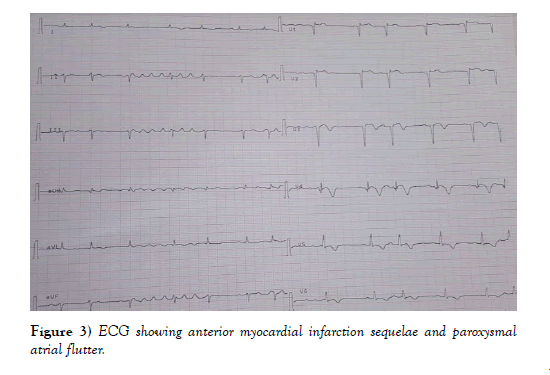 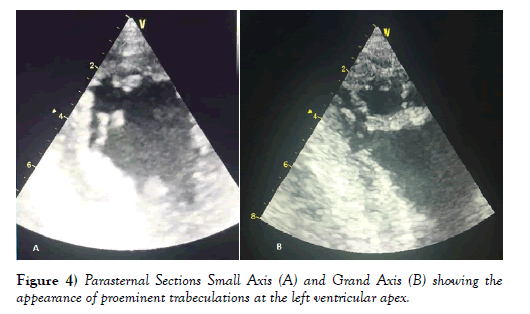 Figure 4: Parasternal Sections Small Axis (A) and Grand Axis (B) showing the appearance of proeminent trabeculations at the left ventricular apex. 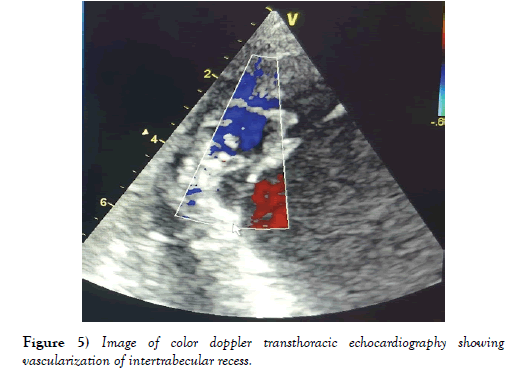 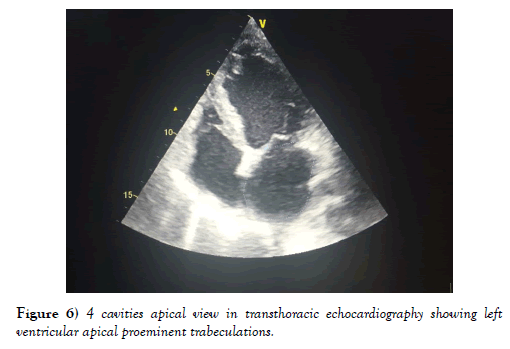 Coronary angiography, performed upon 48 hours from admission, revealed atheromatous coronary arteries with tight stenosis of the proximal left descending artery and a good downstream bed (Figure 7). Due to nonrecurrence of angina pectoris, PCI was not performed. 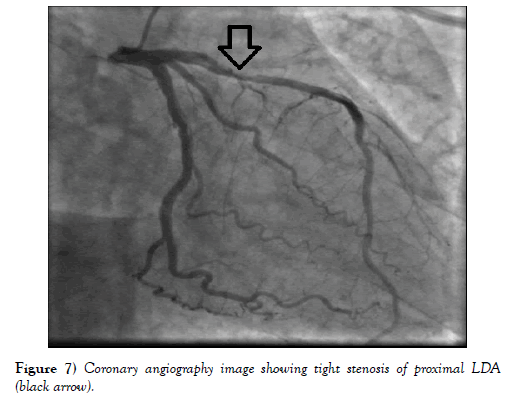 On discharge, the patient was placed on platelet antiagregant, a diuretic, a statin, an ACE inhibitor, an antiarrhythmic agent based on Cordarone and oral anticoagulant based on Vitamine K antagonist.

The extra-hospital evolution for a period of 2 years was favorable, without angina recurrence or rhythm disorder. Electrocardiogram showed a sinus rhythm and echocardiographic control showed a severe left ventricular dysfunction (LVEF of 30%) with large akinesia interesting left descending artery territory without spontaneous contrast aspect (Figure 8). The patient is treated with aspirin, statin, ACE inhibitor and beta-blocker and currently asymptomatic. 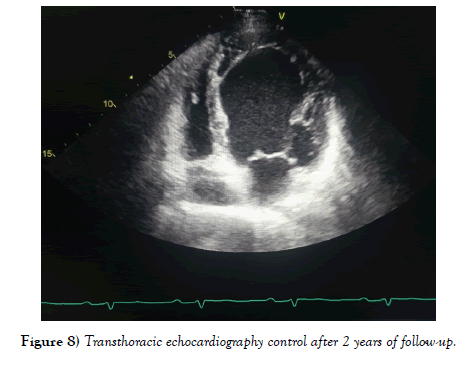 The non-compaction of the left ventricle, otherwise known as spongy myocardium, is a rare type of cardiomyopathy that has been recognized as a genetic cardiomyopathy according to the classification of cardiomyopathies of the World Health Organization since 2006 [3]. It is due to the premature termination of embryogenesis of the myocardium resulting in prominent ventricular trabeculations with the presence of deep intertrabecular recess communicating with the ventricular cavity.

The first sub-Saharan African cases were described by P. Paule et al. in Marseille [4]. It is more observed in men than in women in the largest series [5-8]. The prevalence of this condition remains indeterminate. However, a prevalence rate was estimated between 0.014% and 0.045% among all patients referred for echocardiographic examination [7,8].

Ventricular non-compaction mainly affects the left ventricle [9,10] and is due to the interruption of the normal process of myocardial morphogenesis (myocardial condensation phenomenon from the base to the apex and the epicardium to the the endocardium and transformation of intertrabecular recess into capillaries between the fifth and eighth week [11,12]. As a result, there will be deep intertrabecular recesses that persist. Isolated ventricular non-compaction is characterized by the presence of communication between the trabeculations and the ventricular cavity on one side, and with the coronary circulation on the other side.

The clinical presentation is highly variable; the isolated ventricular noncompaction can remain asymptomatic and be discovered by chance at echocardiography, as it can be diagnosed following clinical manifestations, mainly when the patient presents with signs of heart failure, rhythm disorders or thromboembolic events.

The two most common rhythm disorders are atrial fibrillation and ventricular tachycardia [5-8]. Sudden death was responsible for half of the deaths in the largest series [5-7].

During the follow-up during a period of 2 years, our patient did not have any thromboembolic event.

Paraclinical diagnosis is based mainly on echocardiography, which remains the reference examination. The diagnostic criteria for NCVI in adults were established by Oechslin et al. in 2000 and Jenni et al. in 2007 [1,7]:

1- Absence of coexisting cardiac abnormalities (other than those below) by definition.

3- Predominant segmental location of the abnormality (ie, non-compacted myocardium predominantly [> 80%] in the apical and medioventricular regions of the inferior and lateral wall).

In our case, the diagnosis of non-compaction of the left ventricle was retained on the echocardiographic criteria mentioned above: our patient had no cardiac anomaly coexisting, it was noted the presence of an outer compacted layer and another uncompacted internal with a trabecular network containing deeper deep spaces at the apex and apical segment of the free wall of the left ventricle (Figure 4). Doppler color made it possible to visualize the perfusion of these recesses (Figure 5).

The association between non-compaction of the left ventricle and myocardial ischemia with coronary artery disease has been described by several authors [13]; some have suggested that non-compaction of the left ventricle could be considered as a risk factor for myocardial ischemia [14,15] or even as a cause following an embolic complication [16,17] others thought that both pathologies may have a genetic link in common with a family survey [18,19]. In the case of poor echocardiographic image quality, other paraclinical means may facilitate diagnosis such as contrast echocardiography [20], magnetic resonance imaging [21], positron emission tomography and ventriculography; the latter accompanied by coronary angiography is especially useful in the search for associated anomalies.

Therapeutic management is similar to that of other cardiomyopathies and is based on symptomatic treatment: treatment of heart failure (converting enzyme inhibitor, beta-blockers and diuretics), anti-arrhythmic in case of rhythm disorders and anticoagulation in prevention of systemic embolism especially in case of left ventricular dysfunction, atrial fibrillation or thrombus constituted [3].

In the presence of rhythm disturbances in combination with severe ventricular dysfunction, the implantable cardioverter defibrillator can be put in place with the possibility of cardiac transplantation, which remains the definitive treatment [3].

The mortality rate appears to be high in the case series. Ritter et al. reported a mortality rate of 47% at 06 years of follow-up. Aeschlin et al. when to them, reported a rate of 35% after a follow-up of 44 months., And blamed prognostic factors such as the high end diastolic diameter (>60 mm) at diagnosis, a class III or IV NYHA, presence of persistent or permanent atrial fibrillation, non-compacted myocardial ratio on compacted myocardium greater than 3, presence of branch block and the presence of at least three uncompacted segments [7,8]. Our patient remained asymptomatic under well-managed medical treatment, during the two years of follow-up; he did not present dyspnea, palpitations nor sign in favor of a thromboembolic event.