cardiac death (SCD) is a major cause of death in reduced left ventricular ejection fraction heart failure (rEFHF). Implantable cardiac defibrillator (ICD) significantly reduces SCD in rEFHF. Optimal heart failure medical therapy, including the blockage of renin-angiotensin system (ACEI or ARB), aldosterone system (MRA) or adrenergic system (BBK), has also proven to reduce SCD in these patients. Promisingly, a combined angiotensin receptor and neprilysin inhibition (ARNI) as compared to ACEI has demonstrated to further decrease SCD in rEFHF (by 22%). The decrease of myocardial wall tension induced by ARNI leads to a reduction in cardiac remodeling, fibrosis and repolarization dispersion, all major markers for ventricular arrhythmias. Therefore, ICD plus pharmacological therapy with ARNI, BBK and MRA are complementary tools to combat SCD.

Decompensated congestive heart failure is frequently leading to a atrial and ventricular arrhythmias and vice versa. Cardiac arrhythmias, such as atrial fibrillation, frequent premature ventricular beats or a repetitive/ incessant ventricular tachycardia, can produce reduced left ventricular ejection fraction heart failure (rEFHF) [1]. Conversely, sudden cardiac death (SCD) due to ventricular arrhythmias is a major cause of death in rEFHF [2]. Implantable cardiac defibrillator (ICD) significantly reduces SCD in rEFHF (by~50% to 60%), [3-7] whereas antiarrhythmic drugs have failed to reduce the risk of SCD as effectively as ICDs (Figure 1) [6,8,9]. In addition, antiarrhythmic drugs are associated to adverse side effects. There is no doubt that ICD is an efficacious strategy for preventing SCD in patients with left ventricular ejection fraction (LVEF) ≤ 35%, however the following considerations should be done: 1) ICD is preventing 50-60% of SCD, not 100% of SCD in rEFHF, 2) Not all patients at high risk of SCD are ICD candidates, including those patients with New York Heart Association (NYHA) class IV heart failure, and 3) its worldwide use is limited by cost and access to the technology. 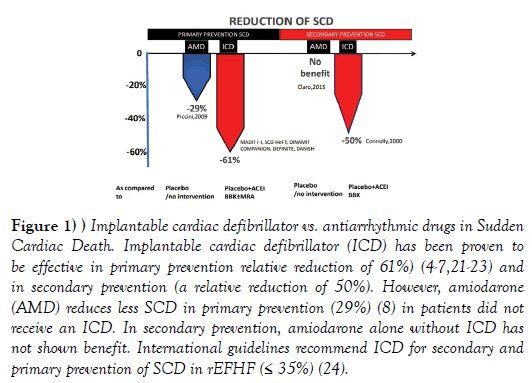 Therefore, physicians and researchers continue searching for approaches to reduce SCD in these patients.

Therefore, physicians and researchers continue searching for approaches to reduce SCD in these patients.

The blockage of these pathways has decreased global mortality and SCD in rEFHF patients. 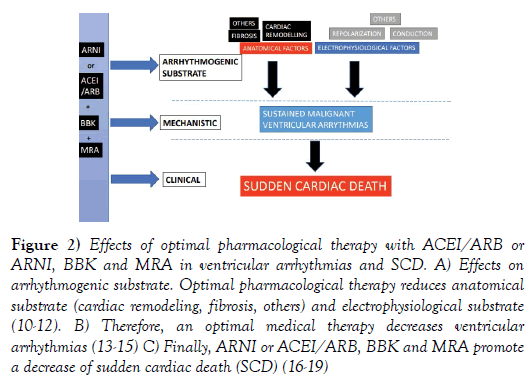 Considering the temporal sequence of rEFHF trials (Figure 3), ACEi/ARB decreased SCD by 20% [17]. Then, BBK reduced SCD by an additional 42% [16]. Subsequently, MRA demonstrated an extra reduction of 19% of SCD. [1] Recently, a combined angiotensin receptor and neprilysin inhibition (Sacubitril-Valsartan, ARNI) [19] has demonstrated greater benefit as compared to ACEI in decreasing SCD (by 22%). ARNI prevents the degradation of beneficial natriuretic peptides, decreasing myocardial wall stress, reducing cardiac remodeling and fibrosis, preventing ventricular arrhythmias as given with BBK and MRA [20]. 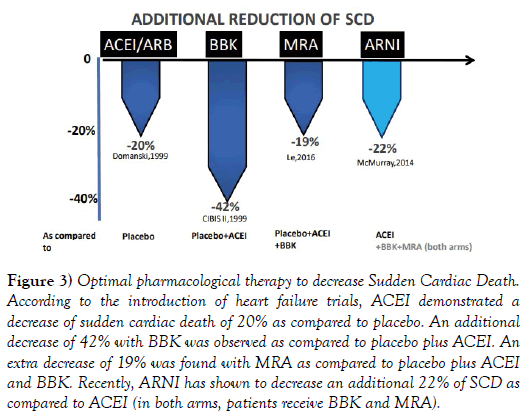 All-cause mortality benefit observed in these positive ICD trials is mainly due to the reduction in SCD.

In contrast, large studies such as the DINAMIT, [21] the DEFINITE [22] and the DANISH trials [23] failed to prove a decrease of global mortality from ICD in ischemic (within 40 days after myocardial infarction) or in non-ischemic rEFHF. In these negative trials, ICD also produce a relative reduction of SCD of ~50% to 60%. However, this decrease of SCD was not enough to generate a significant decrease in global mortality. The DANISH and DEFINITE trials studied non-ischemic rEFHF patients. In this population, the rate of SCD without ICD is ~6-8%, inferior to the rate in ischemic rEFHF (~10%). In addition to potentials explanations related to the type of rEFHF (non-ischemic in DEFINITE and DANISH trials) or the timing of ICD implantation (≤ 40 days post-myocardial infarction in DINAMIT trial), we analyzed others potential causes such as differences in pharmacological therapy.

Figure 4 shows the use of ACEi/ ARB, BBK and MRA in the most relevant ICD trials for primary prevention of SCD. 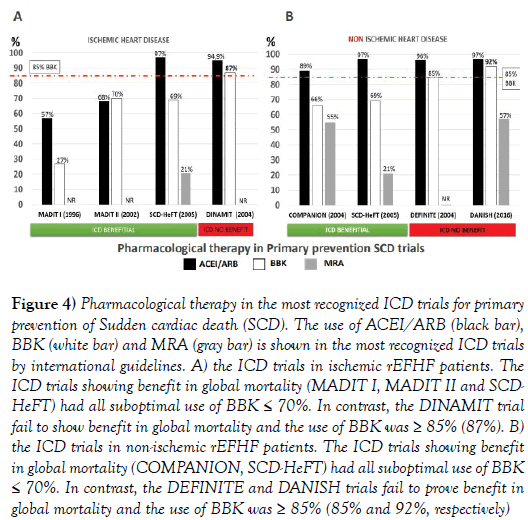 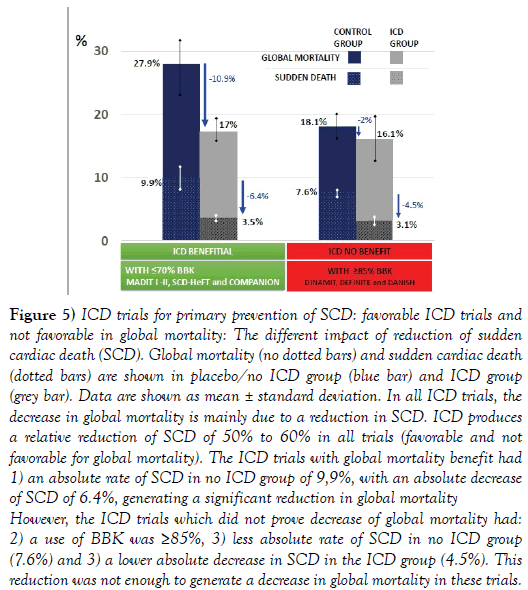 In the favorable ICD trials, the rate of SCD without ICD was higher (~10%) and ICD generated a higher absolute reduction of SCD (~6.4%).

In trials in which ICD was not beneficial, the rate of SCD without ICD was lower (~7.6%) and ICD produced a lower absolute reduction of SCD (~4.5%).

Therefore, the higher use of BBK in ICD trials, the lower rate of SCD without ICD and lower reduction rate of SCD in the ICD group, making more complicated to demonstrate differences impacting in global mortality.

The DANISH trial proved the importance of an optimal medical therapy in non- ischemic rEFHF patients. In this trial, ICD did not reduce global mortality despite a significant reduction of SCD, as patients were well treated with heart failure pharmacological therapy. In the DANISH trial, patients received 97% of ACEI/ARB, 92% of BBK and 57% of MRA. However, tolerance to ACEI/ARB, BBK and MRA is not always possible. Moreover, the results of DANISH may be attributed to a prolonged follow-up (>5 years) and the time course nature of rEFHF, which progresses along time, increasing gradually heart failure mortality. The recently published AHA/ACC/ HRS guidelines for ventricular arrhythmias prevention, still recommend implanting an ICD in non-ischemic rEFHF [24]. However, the DANISH, the DINAMIT and the DEFINITE trials highlight the relevance of an optimal medical therapy to reduce SCD. It is important to take in consideration that patients who are not receiving ACEI/ARB, BBK and/or MRA, due to lack of optimization or intolerance, are more vulnerable for SCD. Optimization of medical therapy (≥ 3 months) is not only needed before implanting an ICD. After implanting an ICD, optimization of medical therapy is also crucial, with ARNI, BBK and MRA (Figure 3) [13-15,20].

Although ICD significantly reduces SCD, does not prevent all the events of SCD such as cardiogenic shock, incessant ventricular tachycardia or electromechanical dissociation. [4-7,21-23].

It is well recognized that, the indications of ICD have been more debated in non-ischemic rEFHF. The introduction of a new therapy, sacubitrilvalsartan (ARNI), which reduces SCD by an extra ~22% as compared to ACEI, will necessarily have an impact in SCD endpoints and global mortality in future ICD trials. The rEFHF therapies have dramatically advanced in the last decade. ARNI improves NYHA functional class [19] and increases left ventricular ejection fraction (LVEF) by ̴ 5% [20]. There are the major findings that we use to indicate an ICD. New ICD trials will be carried out to elucidate the value of ICD in both rEFHF, midllerange EFHF and preserved EFHF.

The prevention of SCD does not end after ICD implantation and continuous optimization of medical therapy improves clinical outcomes.

There is a robust correlation between ICD shocks and increased mortality in ICD recipients [24,25]. It is uncertain if shocks are purely a marker of a more severe cardiovascular disease or directly contribute to the increase in mortality. 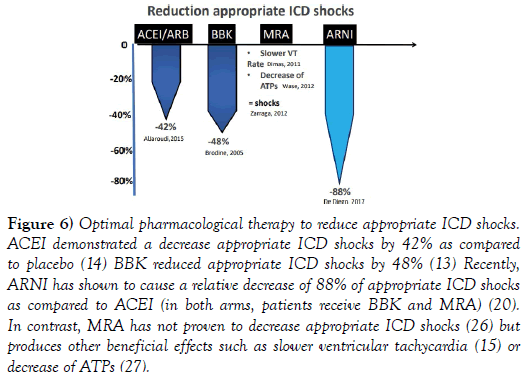 Recently, an additional decline in ICD shocks was found after ARNI as compared to ACEI [20]. In contrast, MRA did not reduce ICD shocks, [26] but other beneficial effects were demonstrated such as decrease of ATPs or slower rate of ventricular tachycardia [15,27] (Figure 7). 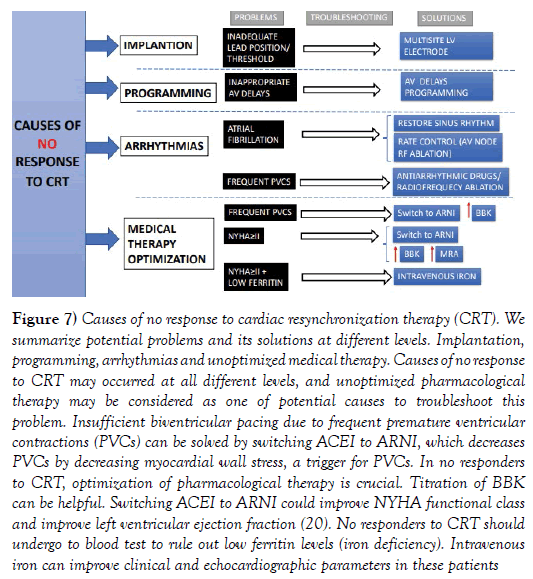 Figure 7: Causes of no response to cardiac resynchronization therapy (CRT). We summarize potential problems and its solutions at different levels. Implantation, programming, arrhythmias and unoptimized medical therapy. Causes of no response to CRT may occurred at all different levels, and unoptimized pharmacological therapy may be considered as one of potential causes to troubleshoot this problem. Insufficient biventricular pacing due to frequent premature ventricular contractions (PVCs) can be solved by switching ACEI to ARNI, which decreases PVCs by decreasing myocardial wall stress, a trigger for PVCs. In no responders to CRT, optimization of pharmacological therapy is crucial. Titration of BBK can be helpful. Switching ACEI to ARNI could improve NYHA functional class and improve left ventricular ejection fraction (20). No responders to CRT should undergo to blood test to rule out low ferritin levels (iron deficiency). Intravenous iron can improve clinical and echocardiographic parameters in these patients

About one third of patients does not respond to CRT. First, optimization of pharmacological therapy should be ensured. Patients with rEFHF and NYHA ≥II benefit from switching ACEI to ARNI. BBK and MRA titration should be optimized. Ferritin levels should be taken every 6-12 months. Iron deficiency is a powerful predictor of adverse outcomes in rEFHF patients [29] and also in CRT patients [30]. Iron deficiency is highly prevalent in CRT patients, up to 56% and correlates to worse NYHA functional class, poor reverse remodeling and heart failure hospitalization. Therefore, intravenous iron is highly recommended in CRT patients if NYHA ≥ II and low ferritin according to international guidelines [1]. We anticipate that the future directions of heart failure treatment will include strengthening the collaboration between heart failure units and arrhythmia units with fruitful results in combating heart failure as recently published [20].