Bedbugs: the new killers of the lungs, here are the causes and precautions

When we sleep, many of the mites feed on dead skin cells and sweat especially bedbugs. However, these small animals of 5 millimeters cause great health problems including: allergies and asthma. In fact, apart from these mentioned diseases, they cause other problems on the human lung. During the night, bedbugs disturb the sleepers; they feed on the blood by pricking the skin. And this sting usually leaves red and sometimes indolent traces.

•Show how medical and doctor teachers are getting ready to help people avoid this small disease.

•I will provide some concrete tips that can help homes avoid bed bugs.

•Through a process, show how these bugs happen to affect the human lung.

• Can these insects cause a respiratory problem too? If yes, how?

• How to deal with the painless bites of this small insect.

•What causes a small neglected insect to create a large disease?

Indeed, some people can catch the lungs are often caused by viruses, bacteria and even pathogens such as fungi. However, bedbugs on the wrong bed can also cause illness through a respiratory infection, such as influenza, bronchitis that "degenerates" and subsequently settles in the alveoli of the lungs. And it will cause pulmonary emphysema, resulting in the destruction of lung cells that can no longer reject the air they contain [1,2]. These symptoms of its kinds of contamination can last several weeks without much visible sign on the already infected person.

In some cases, the pleura can "sometimes" be damaged. These small insects can be minimized, but they can create serious and large diseases in the body. As these insects like the skin, the means to eradicate them must be severe and practicala (Figure 1). 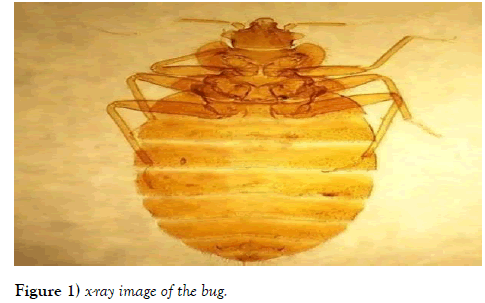 After a very thorough study, it was found that these pests can be found in common transport, barracks, dormitories, aircraft, etc. The true name of the bug is Cimex lectularius, it is its Latin scientific name. As soon as there is human presence, the bug is not far because it feeds on the blood of the man as said above.

Infestations have increased dramatically since the late 1970s when many insecticides harmful to humans and the environment were removed from sale [3,4]. International trade, mass tourism, immigration favor the recrudescence of bedbugs that can be found in bed.

After any sting, the body becomes blistered and in many cases they are red (Figure 2).

Figure 2: The red bunt caused by the bug can cause great problems in the long run.

Adult bugs are 5 to 8 mm long and do not move fast enough to escape the sight of an attentive observer. Nymphs are translucent and lighter in color. By becoming adults, they become darker and opaque. In adulthood, they are often compared to lentils or apple pips.

Like all bedbugs, it has a bite-sucking device transformed into a long rostrum, designed to bite and suck under the body. Thanks to this rostrum which is a sort of elongated tube with 2 entries, the bug is piercing our skin to inject a little saliva which contains an anesthetic to reduce the pain of the bite and with the other tube, an anticoagulant to thin our blood. With this system, the bug is a queen's feast flowing afloat.

It was in the evening, in his well condensed room, raining, Jospin Mackataba of about sixty was threatened by bedbugs to go to the hospital. He states: "After my move, my apartment was filled with a lot of bedbugs, as soon as night fell, I scratched myself with both hands in the belly until I removed sores." I did not know what it was The pain intensified, I did not see what stung me After an hour of pain, I went to the hospital for the care of my wounds After the treatment, the doctor showed me other harmful effects that these small insects can create on my health. At the time of the return, I took a measure to eradicate them without mercy ".

The professor, who specializes in respiratory diseases and specializes in pulmonary problems at the official university of Goma, explains that asthma is a bronchial disease [5,6]. And those seizures are caused by triggers that can vary from person to person (Dust, pollen, animal feather, mold, moisture, cold).

It shows that, these triggers, even if they are less severe, the symptoms are the same around the bronchi are tightening and the same mucous membranes become swollen which makes breathing difficult and wheezing. In a way, the major causes of asthma are lesser known, it is likely these small animals called bedbugs may be among the triggers of this disease.

The methods to avoid them are numerous. Let's focus on important. Act as quickly as possible because bedbugs that may be on the bed, for example, must be eradicated quickly because they breed at a high rate: females lay 2 to 5 eggs a day and between 300 and 500 eggs in their entire career. The use of baking soda is that of being able to get rid of these insects in a healthy and non-chemical way.

In the seminar session organized by the National University of Medical Technology of Butembo, Professor Martin Paulin, pulmonologist bronchus and lungs to advise the use of vacuum cleaner, steam cleaner, essential oils, diatomaceous earth and pyrethrum aerosol causes these small pests to burrow. In case of misuse of educators, we can still attract diseases of the lungs [7,8]. For example, misuse of baking soda and suction can create another deasese of the respiratory level.

The consequences of bedbugs on the lung have been the subject of these texts. Indeed, we have experienced some discomfort that can cause this little animal. How external stings can "sometimes" influence the internal organs of the human body, including the lungs.

Also, we reviewed that the reaction after bites depends on the sensitivity of the individual:

•For some, the bites disappear after a few hours or a few days without treatment.

• Others do not even know that they have been stung and will not see any bites until a few months of infestation.

•But for others, it is an immediate and localized allergic reaction, a kind of red, itchy, very painful blisters that must not be scratched without risking serious infections or other illnesses.

•In case of big reaction, it is advisable to consult your doctor to calm the allergy but also to avoid a great trauma and long-term psychological distress due to these repeated bites.

• Small, but with an ogre's appetite, in one night, she can sting us more than 90 times.

•The bug spots its victim in part by the heat it releases.

However, our research did not say that any sting from this insect causes lung problems, but rather these stings result in a progressive deterioration that can influence the lung over time.