Different variants in the digital flexion creases are found in a number of syndromes, but rarely found in phenotypically normal individuals. We describe a case of a single interdigital flexion crease of the fifth finger present bilaterally in a phenotypically normal male. Influence of genetic factors and hand movements in utero on crease development is also discussed.

The wrist, thenar, palmar, and digital flexion creases represent skin flexion lines in the vicinity of synovial joints, where the skin is attached to the underlying fascia [1]. Digital creases ease movement of the digits without impingement by providing “folding points” in the skin analogous to the creases in a folded roadmap, and due to strong attachments to the underlying fascia, they also provide the stability to the skin required for strong grasping. Two digital flexion creases are normally present on the thumb (metacarpophalangeal and interphalangeal creases) and three of them on the other fingers (metacarpophalangeal, and proximal and distal interphalangeal creases). A ring crease, usually present as a metacarpophalangeal crease on the third finger and fourth finger, is hardly ever found on the fifth finger [2].

While extra interphalangeal transverse creases of the fifth finger can be found in phenotypically normal males and females without radiographic abnormalities of the bones and joints or evidence of dyskinesia [12], the presence of missing digital crease is extremely rare in individuals without chromosomal or other anomalies. For the first time in the medical literature we report a case of a single interdigital flexion crease of the fifth finger present bilaterally in a phenotypically normal male individual.

Twenty-eight-year-old phenotypically normal male from Croatia with no previous medical history was observed to have a single interdigital flexion crease of the fifth finger. This variation was found bilaterally and accompanied with a ring crease (Figure 1). Radiologic examination of the both hands showed normal number of phalanges, including three completely developed phalanges of the fifth finger on both hands. No significant deviations in shape of proximal or distal extremities of phalangeal bones were found. There was no visible fusion of the bones in neither the interphalangeal nor the metacarpophalangeal regions (Figures 2,3). Regular passive mobility of the fifth and fourth finger metacarpals compared with the more rigid third and second fingers, as well as the active mobility and palmar flexion of the fifth and fourth finger metacarpals when making a fist has not been affected. Figure 2: Comparative radiograph of both hands showing normal number and morphology of phalanges. 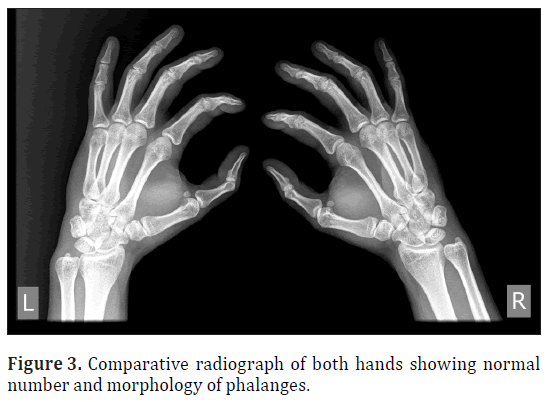 Figure 3: Comparative radiograph of both hands showing normal number and morphology of phalanges.

Bilateral presence of a single interdigital flexion crease on the fifth finger in the phenotypically and chromosomally normal individuals is extremely rare finding. Rodewald and Wicsherath described a male subject with a unilateral single crease on the fifth right finger, without aplasia or hypoplasia of the middle phalanx and with a mobile interphalangeal joint [13]. Missing digital creases in people with normal joint anatomy and their occurrence in several syndromes suggest that genetic factors have influence in digital crease formation; however, these factors are poorly understood and disagreement regarding the origin of digital and palmar creases still exists.

Kamath et al. propose two hypotheses of digital crease development [14]. The first hypothesis states that hand creases develop secondary to flexion movements of the developing digits and hand. Studies describing abnormal crease patterns in deformed hands [15] and correlation of palmar and digital creases to the location of underlying joints support this theory. Newer data showed that digital flexion creases begin to appear between 7 and 9 weeks of gestational age and develop concurrently with the appearance of the digital pads [16]. While spontaneous flexion of the digits does not occur until 11.5 weeks of gestation, this would seem to disprove this hypothesis.

The second hypothesis states that the flexion creases are formed independently of fetal palm movement and are genetically determined. This is supported by the presence of additional or missing digital creases in individuals with normal anatomy of the joints and is consistent with their sequential formation during gestation. However, since arguments concerning the timing of the appearance of creases in relation to the first fetal hand moves are based on diverse definitions of flexion movement in utero, there is still some controversy surrounding this hypothesis.

Stevens and colleagues compared formation of the digital creases with reflex hand movements which can be induced as early as 8.5 weeks of gestational age [17], opposed to Kimura and Kitagawa’s work which took into consideration only spontaneous movement occurring after 11.5 week of gestation [16]. When reflex movements (which can be induced earlier, correspondingly with the first appearance of the digital creases) are used as the comparison, Stevens et al. concluded that although genetic factors do have an important role in flexion crease formation, fetal hand movement is essential for normal crease pattern development.

Fried and Mundel described an Ashkenazi Jewish family where absence of distal interphalangeal creases of fingers with flexion limitation is caused by an autosomal dominant gene and transmitted through four generations with eight affected individuals [18]. Only one member in the study showed profound mental retardation and cerebral palsy, other affected members were of above average intelligence. While precise role of genetic factors is still unclear, high levels of Jag1 and 5’Hoxd genes expression seen in the distal mouse limb bud during recent mouse in situ studies back up the notion of genetic predetermination [19].

This case of a single interdigital flexion on the fifth finger is unique by its presentation, and presented individual should be submitted to karyotyping and detailed genetic testing for further insight. Taking both developmental and genetic issues into consideration, these kinds of variations are becoming more and more important for geneticists and developmental biologists.

We thank Mr. Slaven Gelenđer for his valuable advice and technical assistance.