INTRODUCTION: We present an unusual case of papillary renal cell carcinoma, which is a rare subtype of kidney malignancy. Objective: The present case report emphasizes a voluminous left renal tumoral mass causing bowel obstruction and necessity of emergency surgical intervention. CASE PRESENTATION: A 74-year-old patient with a history of multiple severe cardiovascular conditions, presented in the emergency room accusing abdominal distension and pain, nausea, vomiting and lack of intestinal transit for about 72 hours. Based on the symptomatology, physical examination and imagistic explorations a clinical diagnosis of bowel obstruction was arisen, caused by a voluminous tumor with compression of the large vessels and invasion of the left colon. Given the severity of the cardiovascular comorbidities and the complexity of the case, the possibility of patient’s transfer to a university hospital was arisen, which was not practicable due to the COVID-19 pandemic. During surgical intervention en-bloc resection of the left kidney and tumoral mass was practiced. Histopathologic examination identified the tumoral mass as type I papillary carcinoma of the left kidney. The postoperative evolution was unfavorable, due to the severe cardiovascular comorbidities, on maximal vasoactive support the patient remained hemodynamically unstable, showed progressive myocardial infarction with the persistence of arrhythmias and severely reduced ejection fraction which led to his unfortunate death. CONCLUSION: Careful patient selection is needed to ensure a favorable risk-benefit ratio. Also a thorough multidisciplinary evaluation of patient and the possible therapeutic options is necessary, in order to create an optimal and individualized treatment plan hydatid nature of the lesion. The definitive diagnosis remains histological and the treatment is always surgical. We report an observation of a breast hydatid cyst discovered incidentally.

Renal Cell Carcinoma [RCC] can be considered the most common type of kidney malignancy worldwide [1]. Several classification systems of RCC have been published, with the most recent in 2004, from the World Health Organization [2]. Papillary renal cell carcinoma [PRCC] is a rare subtype of kidney malignancy, representing only 10-15% of all cases. The two histological categories [type I and II] are characterized by different histologic appearances and biologic behaviors. Type I PRCC is considered less aggressive and is represented often by slow progression and less tendency to metastasize [3]. Mortality rates are still significant and present an increasing disposition [4]. A data analysis of the SEER database indicated that 5-year relative survival rates improved more for tumors measuring less than 2 cm compared with those measuring a more voluminous malignancy. Furthermore, 5-year survival rate is significantly better for patients with a localized disease [91.7%] compared with patients with regional [64.2%] or distant [12.3%] metastasis [5].

A 74-year-old patient with a history of multiple cardiovascular conditions like arterial hypertension, chronic ischemic heart disease, congestive heart failure, aortocoronary bypass surgery of left anterior descending artery [LAD] known from 2003 and percutaneous transluminal coronary angioplasty [PTCA] with DES implantation on the right coronary artery [RCA] for NSTEMI two years ago, presented in the emergency room of the small town General Hospital of Târgu Secuiesc, accusing increasing abdominal distension accompanied by diffuse abdominal pain, nausea, vomiting and lack of intestinal transit for about 72 hours. In the recent history no genitourinary symptoms were present. Physical examination revealed a significantly prominent abdomen, dullness to percussion, no bowel sounds after auscultation and palpable tumoral mass occupying epigastrium - left hypochondrium - left abdominal flank - left iliac fossa and the periumbilical region. Computer tomography examination revealed a giant tumoral mass with left renal origin, measuring 19.2 × 21.76 × 19.12 cm (Figure 1). Furthermore, imagistic exploration identified abdominal large vessels pressed to the right side and compression of the splenic flexure and descending colon, causing bowel obstruction (Figure 2). Given the severity of the cardiovascular comorbidities and the complexity of the case, the possibility of patient’s transfer to a university hospital was arisen, where multidisciplinary approach [urologist, general surgeon, plastic surgeon, interventional cardiologist] and proper intensive unite care are available. Due to the COVID-19 pandemic, the county emergency hospital was shut down and available only for patients infected with coronavirus; furthermore, university hospitals also modified their admission strategies and received only patients from their territory in order to avoid spread of the infection. Therefore, the decision was made to proceed with surgical intervention at the local hospital, due to the urgent character [bowel obstruction] of the case caused by the voluminous tumoral mass. In order to ensure a good quality of care, a multidisciplinary team was formed, involving two urologists and a general surgeon. Prior surgery, bowel preparation was not possible, the patient benefited of liquid diet, hydroelectrolytic correction and nasogastric drainage. A preoperatory cardiologic examination was also performed in order to evaluate the operative risk. The patient presented high cardiovascular risk for this complex abdominal surgical intervention because of the known coronary ischaemic disease, with no recent cardiovascular imaging, with a heart failure of preserved ejection fraction. Despite of all, surgical intervention was not contraindicated because of the life-threatening condition of the patient. 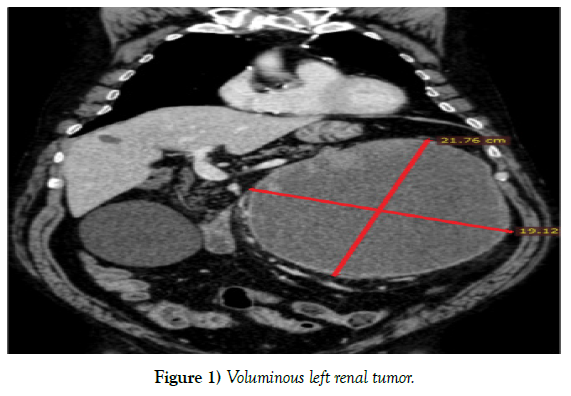 A midline incision with left hypochondrium extension was executed in order to ensure a better view and access on the tumoral mass (Figure 3). After entering the abdominal cavity, the left 1/3 of the transverse colon, splenic flexure and descending colon were mobilized and medialized carefully from the antero-lateral surface of the tumor. Disturbing factor presented to be the diffuse bleeding from the tumoral vessels, but during the hole surgical process care was taken to ensure the tumor capsule’s integrity. Appearing hypotension forced careful mobilization of the tumor, caused probably due to the compression of the voluminous mass on large vessels. Circumferential dissection and mobilization allowed progression, but isolation of the tumor from the kidney was not possible, moreover renal pedicle preparation was not practicable. After preparation, transection and ligation of renal vessels near their origin, en-bloc resection was performed, removing the left kidney and the tumoral mass, which were sent for pathologic examination (Figure 4). A splenic pedicle bleeding accompanied the resection, for which hemostatic suture of the damaged vessel was performed. Retroperitoneal hemostasis and examination of the intraabdominal organs completed the surgical intervention. Abdominal wall closure was performed in separate anatomical layers. Intraoperative bleeding was present in a moderate manner [< 700 ml], for which two units of blood were transfused by the end of the procedure. 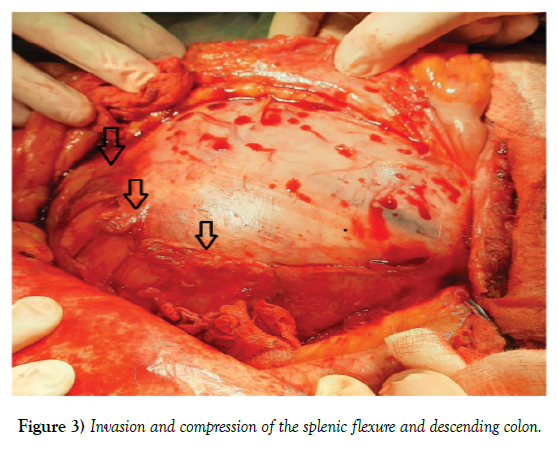 Figure 3: Invasion and compression of the splenic flexure and descending colon. 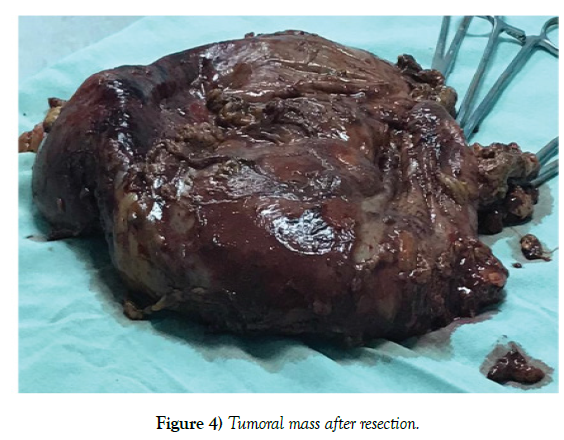 After surgery, the patient was transferred to the ICU and remained sedated and ventilated overnight. After 24 hours the patient showed signs of acute cardiac ischemia, followed by ST depression in lateral leads accompanied by progressive hemodynamic instability, low cardiac output and elevated cardiac biomarkers [troponin I, CK, CK-MB], AST, ALT, lactate and appearance of atrial fibrillation. Echocardiography examination revealed reduced ejection fraction, with global left ventricle hypokinesis, predominant on the lateral wall. Acute NSTEMI and recently appeared AF protocol was followed, with double anti-agreggation, anti-coagulation and anti-arrythmic therapy. On postoperative day 2 neurologic assessment showed intact cognition. Weaning procedures failed due to hemodynamic instability, RAS score -3 maintained. On maximal vasoactive/inotropic support he remained hemodynamically unstable, showed progressive myocardial infarction with the persistence of arrhythmias and severely reduced ejection fraction (from a preoperatory EF of 50 % to an EF of 30 %) which led to his unfortunate death, with no time and possibilities for emergency coronarography and PCI. NFR status explained and consented by family.

Histopathologic examination revealed a cystic tumoral mass with irregular surface and intact capsule (Figure 5). The content of pathological piece was predominantly solid but also with friable, hemorrhagic and multicystic content too. A thin rim of renal parenchyma was present at one pole of the piece (Figure 6). Renal cortical region presented to be fibrotic and enlarged, while the medullar region continued without limits in the tumoral mass. After microscopic examination, the tumor was identified as type I papillary carcinoma of the left kidney, without any intravascular or capsule invasion. 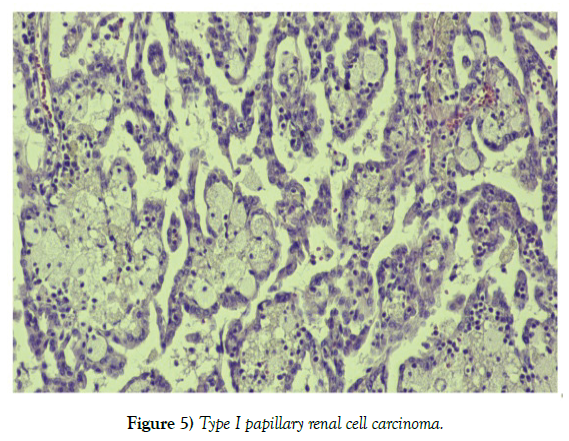 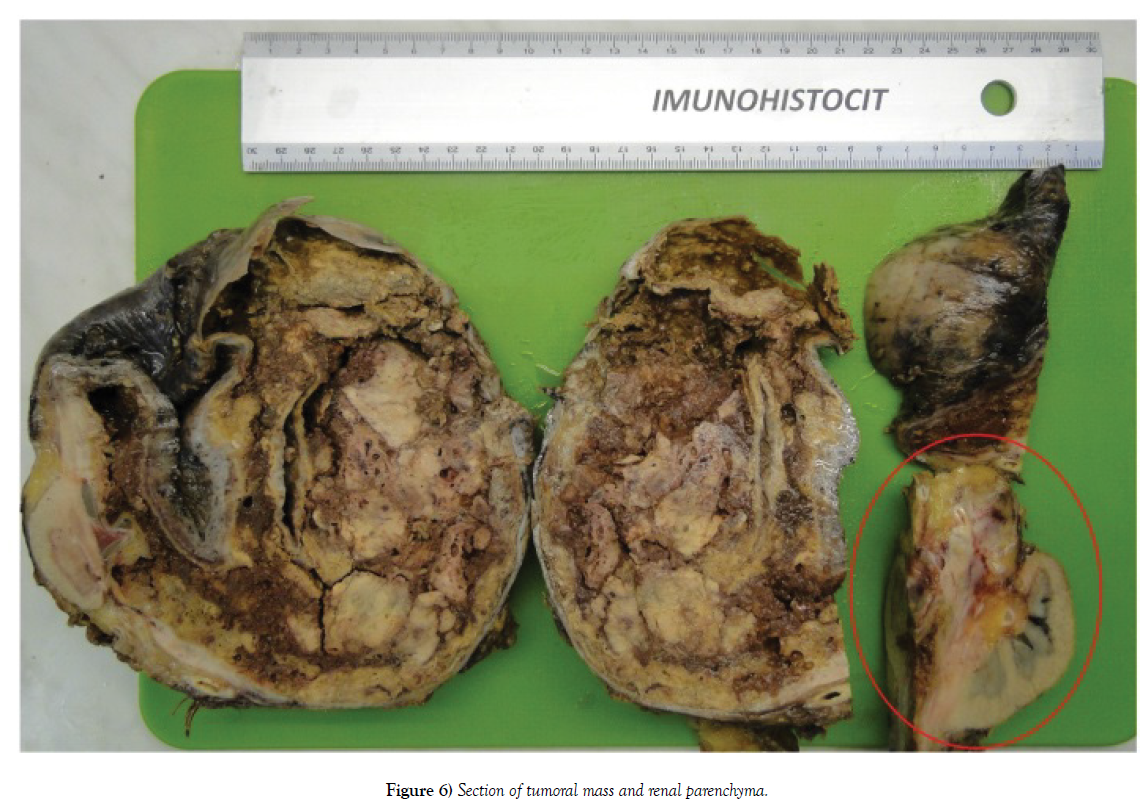 Surgical extirpation remains the standard treatment for patients with renal cell carcinoma [10]. Due to the major advances made in medical field, minimal invasive treatment represent an important option for patients with renal tumoral mass. However, probably the most important principle for minimal invasive surgery is patient selection, which in our case was not possible due to the voluminous tumoral mass. Unfortunately, typical symptomatology of RCC appears in reduced proportion of patients [11]. Probably this fact represent the major reason for development of a giant tumoral mass like in the present case. Delay of surgical intervention did not represent an option either, the urgent character of the appeared complication [bowel obstruction] made surgery a priority. Given the present circumstance, we attempted to perform surgical resection in order to improve the patients quality of life. Older patients diagnosed with cancer often present comorbidities, especially cardiovascular and pulmonary conditions, increasing thereby the mortality risk. Hiten D Patel et al. [12] in a recent study highlighted the major influence of cardiovascular conditions on the postoperative evolution in case of patients with kidney cancer. Furthermore, David A Berger et al. [13] demonstrated that comorbidities are independent prognostic factors for overall survival in case of patients with RCC.

The excessive size of the tumor presented unique challenges for the operating team. It is very strange, that a tumor of this magnitude is found accidentally, however, JS Lam et al. [14] state similar result, according to which 60% of RCC are found incidentally. Fact which explains why many patients are diagnosed at advanced stages of the disease. Furthermore, in case of type I papillary carcinoma metastatic spread occurs rarely [15], which was also the case for our patient. Due to the voluminous mass, operative time and general anesthesia were also prolonged.

The invasion and compression of the splenic flexure and descending colon between the tumoral mass and abdominal wall, led to the occurrence of intestinal obstruction symptoms. Rahul G Hegde et al. [16] also published an interesting article about RCC causing bowel obstruction. Mobilization and medialization of the left colon and left 1/3 of transvers colon represented a tricky challenge and made careful progression necessary. During these procedures increased attention was given to preservation of mesentery and intestinal vascularization, tumoral capsule’s integrity and also the spleen.

Despite all the surgical efforts, the patient’s postoperative evolution was unfavorable. Advanced age, severity of cardiovascular comorbidities, size of the tumoral mass and complexity of the surgical intervention probably all contributed to the appearance of fatal complications.

COVID 19 has caused major health and economic burden around the whole world. Probably one of the mostly affected medical group of the coronavirus pandemic were patients diagnosed with cancer who could not benefit of surgical treatment in specialized centers timely. Tumors of this size are rear but represent extra challenge during surgical treatment with the possibility of multiple intra- and postoperative complications. The advanced age, severity of cardiovascular comorbidities, size of tumoral mass and the complexity of surgical intervention all increased the mortality risk and represented a major part in the patient’s negative postoperative evolution. Thereby, we consider that careful patient selection is needed to ensure a favorable riskbenefit ratio. Also a thorough multidisciplinary evaluation of patient and the possible therapeutic options is necessary, in order to create an optimal and individualized treatment plan.