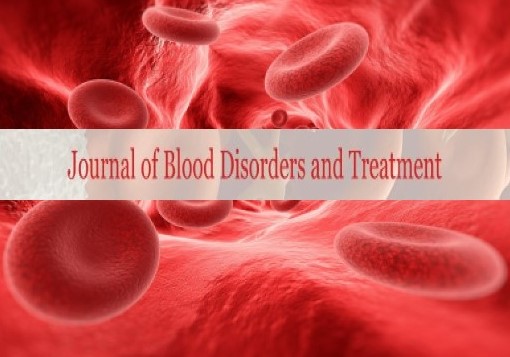 According to guideline of WHO classification system of Myeloid malignancies, Chronic Myelomonocytic Leukemia (CMML) is observed as the most frequent entity among myeloproliferative/ myelodysplastic syndromes. The blast cells observed in the peripheral and marrow was considered as the major prognostic factor identified at that time. Cytogenetic prognostications are not much clear. We studied a patientwith CMML with a successful conventional cytogenetic analysis at diagnosis. Combined results of Fluorescence In Situ Hybridization and Multi Color banding technique revealed a new variant and novel t(12;15) along with duplication of chromosome 1 in CMML. The patient showed BCR-ABL negative in FISH assay result and positive for JAK2 mutation study. Patient achieved remission without any treatment. This is potentially suggestive of a novel favorable-risk translocation in CMML.

CMML (CMML) is a clonal stem cell disorder and shows overlapping features of Myelodysplastic Syndromes (MDS) and MyeloProliferative Neoplasm (MPN). There is an inherent tendancy to transform to Acute Myeloid Leukemia (AML~30%) and CMML often results in peripheral blood monocytosis. Molecular and epigenetic abnormalities are seen in 49%. Cytogenic changes with clonal abnormalities are observed in 30% of cases. There are two subtypes of CMML–CMML 1 (05% circulating blasts and 10% bone marrow blasts) and CMML-2 (5-19% circulating blasts, 10– 19%). About 30% of patients showed clonal cytogenetic changes, whereas 90% of cases showed molecular and epigenetic abnormalities. Mutations observed in CMML involve epigenetic regulators (TET2 ~60%), chromatin/ histone modulators (ASXL1~40%), spliceosome components (SRSF2~50%), transcription factors (RUNX1~15%) and cell signaling (RAS~30%, CBL~15%). Among these, thus far, on multivariable analyses that have included additional CMML relevant factors, only ASXL1 mutations (frame shift and nonsense) and have been shown to be prognostically disadvantageous [1]. According to the World Health Organization (WHO) criteria (2008), CMML is a disorder characterized by: (a) persistent peripheral blood monocytosis 41×109/L; (b) absence of the Philadelphia chromosome and the BCR-ABL1 fusion oncogene; (c) absence of the PDGFRA or PDGFRB gene rearrangements; (d) <20% blasts and promonocytes in the peripheral blood and BM, and (e) dysplasia involving one or more myeloid lineages. If myelodysplasia is absent or minimal, the diagnosis of CMML can still be made if the other requirements are met and an acquired, clonal or molecular genetic abnormality is present in the hematopoietic cells or if the monocytosis has persisted for at least 3 months and other causes of monocytosis have been excluded. It is mandatory to assess the patients presenting with a clinical phenotype of CMML with eosinophilia for the t(5;12)(q31-q32;p13), giving rise to the ETV6 (TEL)-PDGFRB fusion oncogene. The association between monocytosis and PDGFRA rearrangements is uncommon [2]. Certain chromosomal abnormalities are used for risk stratification in both the IPSS and the WHO classification-based Prognostic Scoring System (WPSS) & have a strong impact on the outcome for patients with myelodysplastic syndrome. The only series assessing the potential impact of Cytogenetics in CMML was unable to find an independent relationship between cytogenetic results and disease outcomes [3]. The frequency of abnormal karyotype and specific chromosomal abnormalities in series of patients with CMML are varied because of different factors like small numbers of patients, strict inclusion criteria (WHO or FAB criteria), and referral patterns. Frequency of chromosomal abnormalities in CMML is close to 25% (range 11-42%; 27% in the current study) and the karyotypic aberrations observed are not specific for CMML but also commonly found in other MDS subtypes and AML. There was no deletion of 7 q/monosomy 7, trisomy 8 [4,5]. Life expectancy of patients with CMML is variable from several months to years in natural course of treatment. Numerous studies have been conducted to identify factors associated with these different prognoses. Study of prognostic factors may help to know the biology of the disease, develop risk-tailored treatment course, and evaluate new treatments for defined groups [6]. In the current research paper, we focus and summarize phenotypic and prognostic cytogenetic and molecular abnormalities in CMML. To the best of our knowledge, this is the first report characterizing a ETV6-RNU6-19P partner gene in a case of CMML with t(12;15), and the first to suggest an unusually favorable outcome.

Figure 3: (a) FISH with WCP 1 (SG) and WCP 15(SO probe showed additional chromosome material of chromosome 1 in q arm and three orange signals one on normal chromosome 15, one on der 15 and one on p arm of C group chromosome (b) Inverted DAPI image

FISH results with WCP 15 and CEP 12 revealed orange signals of chromosome 15 present on p arm of chromosome 12(SG). So translocation between chromosome 12p and 15q was confirmed. So final karyotype with combined result of conventional cytogenetic and FISH was 46, XY,dup(1) (q),t(12;15) (Figures 4a & b).

Figure 4: (a) FISH with CEP 12 (SG) and WCP 15(SO) probe showed three orange signals one on normal chromosome 15, one on der 15 and one on p arm of chromosome 12. Two green signals of CEP probe indicated chromosome 12, (b) Inverted DAPI image

FISH was also carried out using Deletion 5q probe. Results showed that 2O2G signals indicating that there was no deletion of 5q (Figure 5). 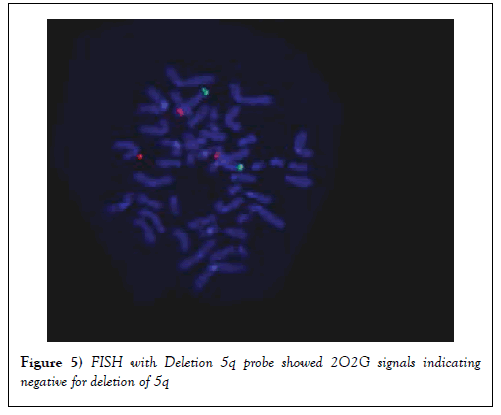 FISH was carried out using Deletion 7q probe. Results showed 2O2G signals indicating that there was no deletion of 7q (Figure 6). 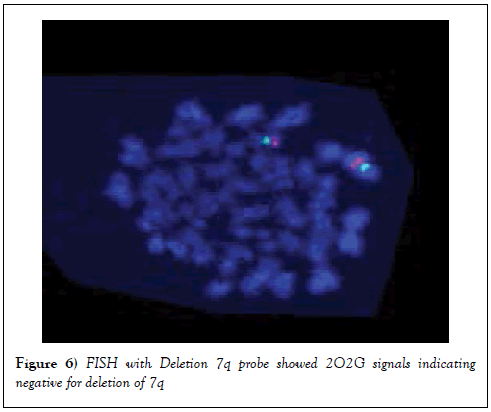 Multicolor Banding analysis revealed that, there was a duplication of q arm of chromosome 1 (Figure 7). 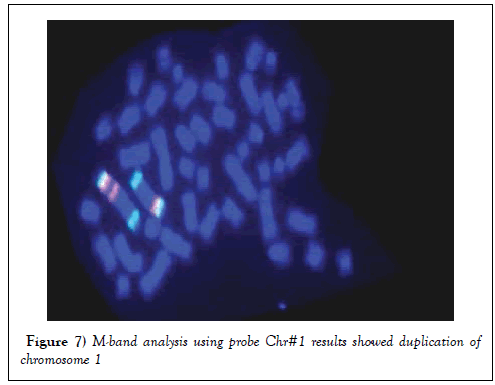 Peripheral Monocytosis with clonal stem cell disorder is the indication of myeloproliferative and myelodysplastic characteristics are the main hallmark of this disease, according to WHO classification. Its diagnosis requires the presence of persistent monocytosis and dysplasia involving one or more myeloid cell lineages. Also, there should be an absence of the Philadelphia chromosome and the BCR-ABL fusion gene and blasts in the blood or bone marrow is less than 20%. Cells in CMML can present myelomonocytic antigens such as CD 33 and CD13, over expressions of CD 56 and CD 2 and variable expressions of HLADR, CD36, CD14, CD15, CD68 and CD64 and elevated level of CD 34 expression may be associated with conversion in to Acute leukemia. Accordance to literature, in present study, patient didn’t show BCR-ABL fusion and in conventional cytogenetic there was absence of Philadelphia chromosome. Clonal alterations, such as trisomy of chromosome 8 and monosomy 7/deletion 7q, occur in 20 to 40% of patients with CMML and are Non-specific cytogenetic changes. Furthermore, they were frequently related to genetic alterations with point mutations in the RAS genes. Del(12p)11, del(20q)12, and hypodiploid karyotypes are some of the less frequent. For a differential diagnosis of this neoplasia, all diseases that cause monocytosis should be considered, such as chronic and acute infections, chronic inflammatory processes and some neoplasias such as Hodgkin’s lymphoma and CML. The onset of disease is at the age of 70 years and etiology is unknown & it is possibly related to carcinogenic and ionizing radiation factors. CMML is a relatively rare disease whose incidence is around 1 case/100000 inhabitants per year. It is a male predominant and disease of older adults. Disease is exceptionally diagnosed before 50 years of age. Our patient was 46 years old and didn’t expose to any carcinogenic and ionizing radiation factors, so very young age and no exposure might be good prognostic indicator [5].

Involvement of spleen, liver, skin, lymph nodes and also peripheral blood and bone marrow is present many times. It presents a survival rate of only one year; however, different factors play a significant role in survival rate like low hemoglobin doses, low platelet count, leukocytosis, monocytosis, lymphocytosis, presence of immature myeloid cells in peripheral blood, high percentage of blasts and decreasing erythroid series in the bone marrow, cytogenetic alterations and high levels of Lactate DeHydrogenase (LDH) and ß2-microglobuline were responsible for further drops in survival rates. Furthermore, approximately one third of patients evolve to acute leukemia, which means a worse prognosis. In accordance to study of Francesco Onida et al. 2002, our patient has elevated level of LDH [6]. This paper presents a case study about the laboratory diagnosis of CMML and cytogenetic abnormalities as a good prognostic indicator. Cytogenetics is part of a recent Spanish score whereas a recent French prognostic score includes the presence of mutations in ASXL1 gene, which is an independent poor prognostic factor in CMML. An international staging system may be established in the coming years [7].

According to the updated WHO classification (2008), the ETV6-PDGFRB fusion gene is included in the criteria of a novel entity, namely “myeloid and lymphoid neoplasms with eosinophilia”, defined abnormalities of PDGFRA, PDGFRB or FGFR1. JAK2 is a tyrosine kinase involved in the transduction of cellular growth stimuli. A somatic activating mutation, JAK2 (V617F), was observed in a majority of patients with Polycythemia Vera and in approximately half those with Essential Thrombocythemia and myelofibrosis. JAK2 (V617F) was also identified in a proportion of CMML patients (2 - 10%), and was to be associated with the myeloproliferative form (MP-CMML) rather than with myelodysplastic form (MD-CMML) reported recently [4]. In present study our patient was positive for JAK2 Mutation.

Generally the rearrangement of PDGFRB at 5q31-33 occurs in distinctive type of CMML. There were several translocations, including t(5;12)(q31- 33;p12) with formation of an ETV6-PDGFRB fusion gene. Though the hematological features were most often those of CMML (usually with eosinophilia), these patients have been characterized as atypical CML. These patients with PDGFRB rearrangement were sensitive to tyrosine kinase inhibitors such as Imatinib, so confirmation of PDGFR rearrangement by FISH or another methodology in patients with CMML features is important for clinical decision making. Here in this paper we observed a patient with t(12;15)(p12;q22) which might be consider as a variant of t(5;12)(q31-33;p12). Genes present in present study are generally observed in Acute Lymphocytic Leukemia patients and role of genes ETV6 and RNU6-19P is not known [7].

In summary, here, we report a case of CMML with novel t(12;15) showed monocytosis with favorable prognosis. Characterizations by cytogenetic and molecular cytogenetic methods are necessary for prognostication and understanding the disease. This report may be helpful for clinician to have a similar case treated. However, more cases are still to be required to study to identify the involved genes and the frequency of this translocation and to assess its potential prognostic value. 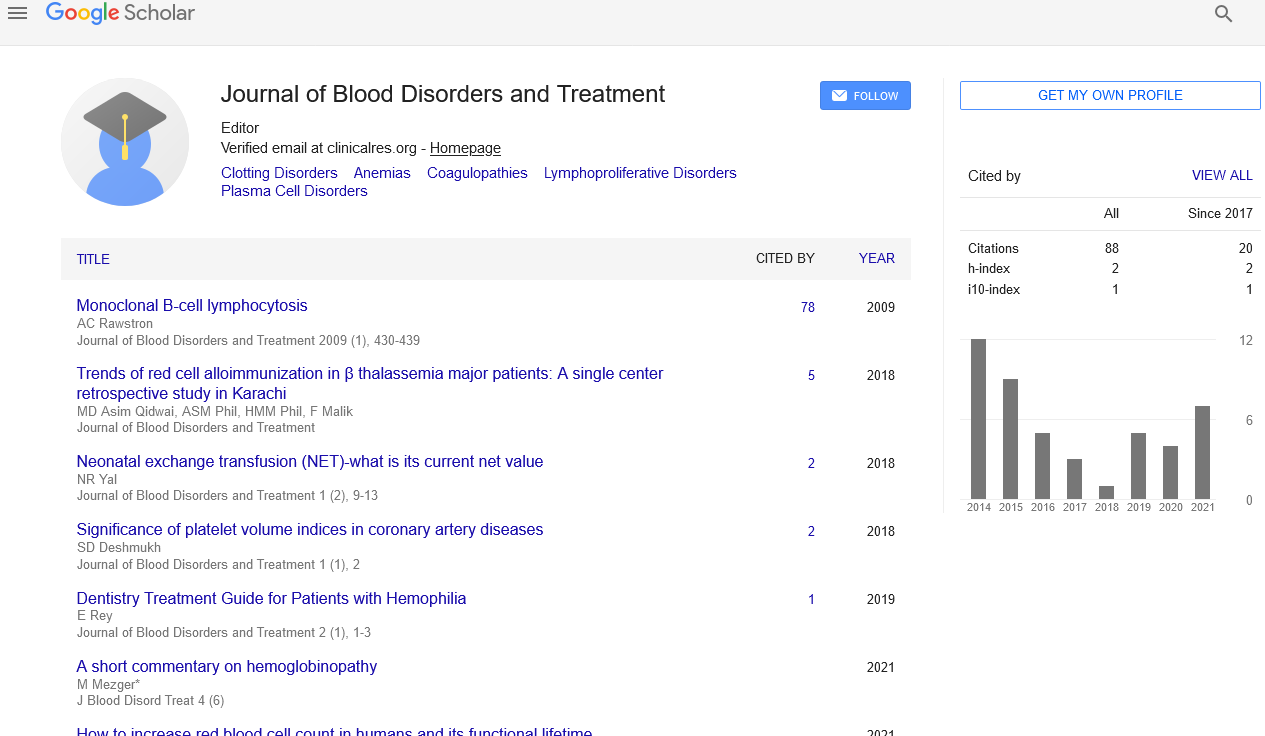