This work attempted optimization of processing conditions of fortified kokoro using response surface modeling (RSM). A central composite rotatable experimental design with three factors (frying temperatures, frying time and cowpea proportions) and five levels was used to evaluate some functional properties and consumer acceptability. The result revealed that solubility, swelling capacity and water absorption capacity of maize-cowpea blend decreased with increase in frying time and temperature. The values obtained for bulk density, swelling capacity, solubility, water absorption capacity and oil absorption capacity ranged from 0.46-0.48 g/mL, 1.27-3.37%, 7.77-10.13%, 171.67-213.33% and 146.67-183.33%, respectively. There was significant difference (p<0.05) in the values obtained for texture, crispiness and taste of fortified kokoro. The desirability value for all the responses was approximately 0.64. The research revealed that varying frying temperature and frying time simultaneously have strong tendency to affect the quality of properties of kokoro fortified with cowpea.

There abound many traditional maize based snacks consumed in many parts of Nigeria. These include Kokoro (corn-cake), aadun (maize pudding), donkwa (maize peanut balls) [1]. Kokoro is a traditional snack consumed especially in western parts of Nigeria. Processing conditions and proportion of materials are critical in determining the quality of snacks like kokoro. Kokoro is consumed by categories of people with varying nutritional demands and therefore suggest the need for nutritional enhancement. The outcome of inclusion of nutrient aiding food materials at varying proportion and production conditions may be necessary. The addition of vegetable protein to improve the nutritional value of snacks were reported by some researchers [1-3]. Some researchers reported the quality and nutritional contents improvement of kokoro using beniseed, cowpea, soybean, groundnut and African yam bean [1,4,5]. Several other studies have been carried out to improve the protein quality of maize products by fortification with plant proteins such as cowpea, soybean and groundnuts [1]. These were, however, done without an attempt to optimise the process conditions and proportion.

Deep fat frying is an established process of food preparation [6,7]. It often involves simultaneous heat and mass transfer process. In this process, moisture is reported to leave the food in form of vapor bubbles and oil is absorbed simultaneously. In some cases, it is used mainly to activate unique flavors and texture of processed foods [7,8]. Modification of physical, chemical and sensory characteristics of the food have been reported as possible outcome of this operation. Some researchers reported that temperature and frying time are major variables controlling deep fat frying operation [7,9,10].

In order to maintain the quality, increase yield and reduce or maintain cost of production, optimizing the process is very essential. Optimization is useful in improving the performance of the food system [11]. Optimizing process and procedure have been reported to aid manipulation of multiple variables of fewer experimental trials [11,12]. These often result into developing interactions and models that is capable of aiding efficient and economic production process. This provide experimental methodology that help generate a mathematical model that may favorably describe and predict the process.

The possibility of producing acceptable kokoro with better nutritional content and sensory quality from maize flour mixed with some legumes have been attempted by some researchers [1,3-5,13]. This study attempted the determination of the optimal level of the processing conditions and cowpea proportion inclusion (Frying temperature, frying time and quantity of cowpea) using response surface methodology (RSM), which is rare in previous reported works.

Maize cultivar (ART 98| SW6-OB) was obtained from Institute of Agricultural Research and Training in Ibadan, Oyo State, Nigeria. Cowpea was obtained from Sabo market, Ikorodu, Lagos state, Nigeria. Refined vegetable oil, salt, onions were obtained from Sabo, Ikorodu, Lagos State. The maize grains and cowpea were sorted, washed, dehulled manually, sun-dried and milled using attrition mill (TYPE YL: 112M–4, ATLAS EXCLUSIVE ALZICO LTD). A deep fat fryer (Model MC-DF 1031) was used for frying Kokoro. The maize-bean flour blends proportions were produced according to Box Behnken experimental design of Response Surface as shown in Table 1. These various blends were packed separately in 100 μm polythene bags and kept in airtight plastic containers till needed. Half of each blend was mixed and stirred in boiled water to make a paste and the remaining half was mixed with salt and onion and then added to the paste with continuous stirring for about three minutes to form homogenous thick dough [1,3,14]. The dough was cooled and kneaded. The kneaded dough was cut into sizes and rolled into ring shapes as generally practiced with the aid of a chopping board. These rolled out pieces were deep-fried in hot refined vegetable oil at temperature between 130, 140 and 150°C and frying time 4, 7 and 10 min, respectively. These were achieved in the combination using a deep fryer for all round frying. The fried pieces of maize-cowpea snacks with the deep fryer equipment (Model MC-DF 1031) were drained and left to cool. The proximate, functional and pasting analyses were conducted on the blends while the consumer acceptability test was determined on the fried kokoro [15].

Experimental Design and Modelling for Optimization

The procedure of Narayana and Narasinga [15] was used with slight modification in the determination for bulk density. The bulk density was computed as shown in Equation 1.

The swelling power and solubility of the maize-based flour samples were determined using the method reported by Leach et al. [16]. A 1 g of Maize-based flour was weighed into centrifuge tube and 50 mL distilled water was added. These tubes were immersed in water bath for 30 minutes, thoroughly and constantly stirred with glass rod during the heating period. The tubes were removed, cooled to room temperature and centrifuged at 500 rpm for 15 minutes. The supernatant was fully transferred into a conical flask and 5ml was pipetted into a weighed petri dish, evaporated over a steam bath and dried in the air oven at 105°C for 4 hours. The weight of the pastes were determined and used to calculate the swelling power as gram of sediment paste per gram maize based flour. Percentage solubility was calculated as gram per gram maize-based flour.

Oil and water absorption capacities were determined, employing the method described by Beuchat [17] and a 10 mL of distilled water or oil was added to 1 g of sample. The mixture was mixed thoroughly for 30 seconds and allowed to stand for 30 min. The volume of the supernatant was recorded. The mass of oil or water absorbed were expressed in percentage.

Quality attributes of the kokoro made from maize and beans flour against a whole maize snack (kokoro) were assessed by 20 member panellists using 9 point Hedonic scale with respect to taste, aroma, texture, colour, crispiness and overall acceptability. The scores were ranked and subjected to statistical analysis.

Response surfaces were represented mathematically by second-order polynomial equation to determine the relationship between dependent variables and independent variables. The model proposed for the response (Yi) as shown in eqn. [2]

Where X1, X2 and X3 are frying temperature (°C), frying time (min) and cowpea proportion (%), respectively. b0 is the value of the fitted response at the centre point of the design (i.e., regression coefficient for interception), b1-b3, b11-b33 and b12-b23 are regression coefficients for linear, quadratic and interaction (i.e., cross product terms), respectively. Y (i=8) is the predicted responses for bulk density, swelling power, solubility, water absorption capacity, and oil absorption capacity, respectively [18]. In order to effectively confirm the adequacy and accuracy of the fitted models, analysis of Variance (ANOVA) was performed. The use of desirability function of RSM that combine all responses into one measurement was also employed [18].

The bulk density is generally affected by the particle size and had been reported to have relevant application on packaging, transportation, raw material handling. The quadratic model with R2=0.55 described the changes in bulk density of maize-cowpea blends snack (kokoro) during frying as shown in Table 2. The bulk density of the kokoro ranged from 0.46-0.48 g/mL and there was significant difference (p<0.05) among the samples as reflected in Table 3. Similar trend was reported by Abegunde et al. [5]. According to Fasasi et al. [19] the bulk density may be affected by protein sources and level of supplementation. According to study in 2008, Bulk density of food is very relevant in packaging. The result revealed that there was significant difference (p<0.05) for Swelling capacity which ranged from 1.27% to 3.37%. The swelling capacity obtained was in agreement with values reported by Abegunde et al. [5] and in contrary to values reported by Ayinde et al. [4]. In this research work, swelling Capacity decreased with increase in cowpea proportion.

However, the coefficient of regression (R2=0.37) of the quadratic model and linear were poor fit in the Table 4. Water Absorption Capacity ranged from 171.67-213.33% and there was significance difference (p<0.5) among samples. This also followed the same trend with the values reported by Abegunde et al. [5].

It was reported by Houssou and Ayernor [20] that cohesiveness of a product is strongly dependent on the high water absorption capacity. The water absorption capacity obtained in this work were lower compared with reported values by some researchers; Fasasi et al. [19] for fermented maize flour-tilapia mix, Adetuyi et al. [21] for malted–soya bean (280%) blend and Awoyale et al. [13] for food (kokoro) supplemented with treated (DSG) (Figure 1). 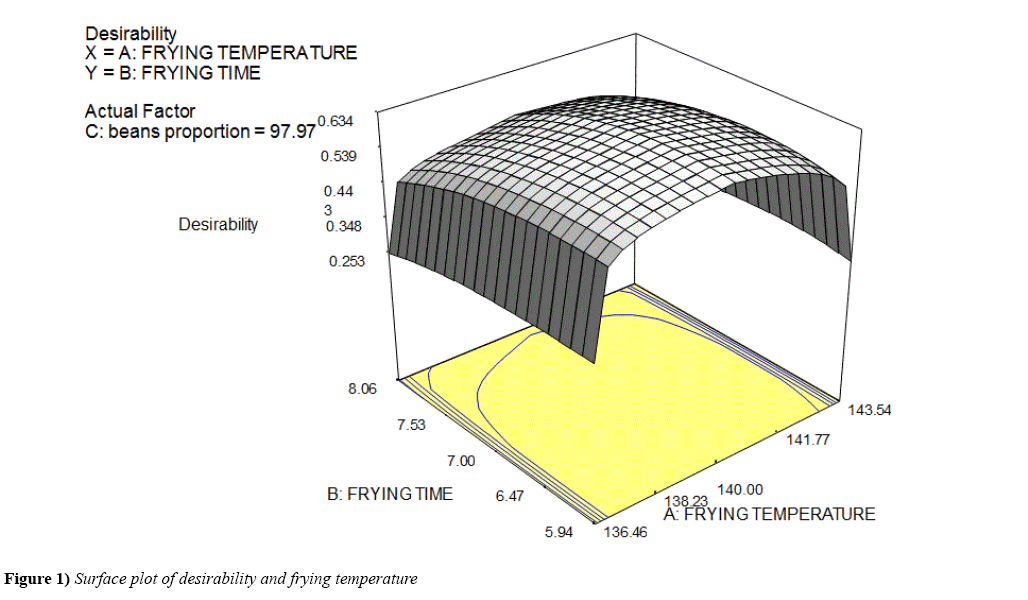 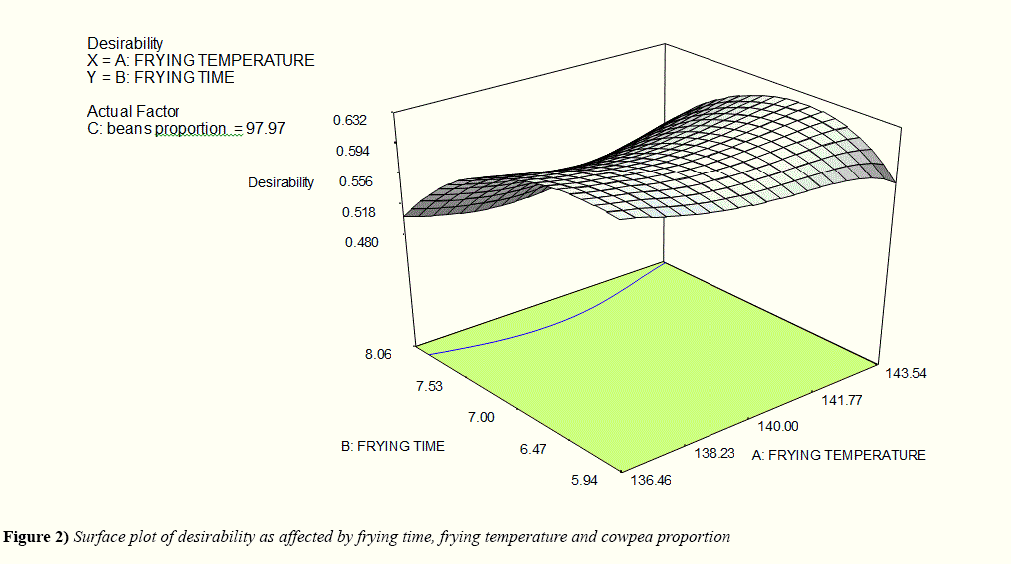 The point with highest possible desirability (0.64) function that could be taken as the optimum condition for frying temperature and frying time combination of maize snack (kokoro) was found to be 143.54°C and 7 minutes, respectively as shown in Figure 3. 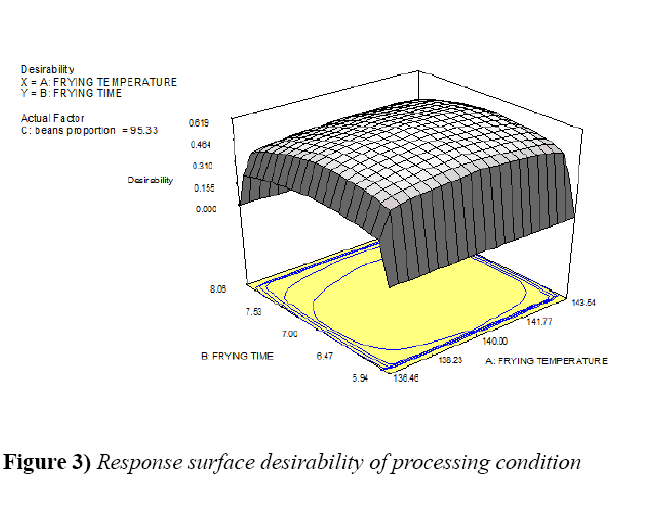 Frying of maize snack (kokoro) at different temperature and time with the combination of beans in different proportions affected the general properties of kokoro. The Fortification of maize snack (kokoro) has strong tendency to improve its nutritional content however, have effect on the functional properties. the Predicted frying temperature, time and beans proportion of 143.5°C, 7 minutes and 98%, respectively with the functional properties 0.47 g/mL (bulk density), 2.3%(swelling capacity), 9.5% (solubility), 201.7% (water absorption capacity), 2.58 (taste), 2.60(aroma), 2.88-2.96 (texture), 2.42 (overall acceptability), 2.58 (colour) and 2.67-2.99 (crispiness) gave the highest desirability value.