Pediatric Chronic Kidney Disease A Child is Not a Young Adult

Chronic kidney disease (CKD) is a growing cause of concern “over a” worldwide and is associated with significant mortality and morbidity, both, in adults and children. Pediatric CKD should be considered differently from adult CKD as they differ with respect to epidemiology, etiology, evaluation and management. In 2012, Kidney Disease: Improving Global Outcomes (KDIGO) defined CKD however, this definition may not be applicable for children under 2 years of age, as their nephrons are yet to mature. Also, an infant born with a congenital renal anomaly may be diagnosed as CKD very early. Common complications of CKD like anemia, hypertension and cardiovascular disease are similar in pediatric CKD like their adult counterparts. However, there are certain complications which are special among pediatric patients like growth retardation and neurocognitive impairments. This review describes the various aspects of pediatric CKD highlighting complications unique to pediatric CKD.

Chronic kidney disease (CKD) is a growing cause of concern over a worldwide scale affecting populations of high, middle and low income countries. It is associated with significant mortality and morbidity, both, in adults as well as children. It is essential to consider pediatric CKD apart from adult CKD as they differ with respect to epidemiology, etiology, evaluation and management. The special issues in pediatric CKD need to be understood and evaluated in order to provide them with the best therapy. This review describes the various aspects of pediatric CKD highlighting complications unique to pediatric CKD.

Until 2012, the diagnosis of CKD varied from continent to continent due to varying definitions used. In 2012, Kidney Disease: Improving Global Outcomes (KDIGO) defined CKD as a structural or functional abnormality of kidneys lasting more than 3 months duration [1]. However, this definition is not applicable for children under 2 years of age, whose nephrons are yet to mature. Also, an infant born with a congenital renal anomaly may be diagnosed as CKD before attaining 3 months of age.

The traditional Schwartz formula [2] has been used for bedside estimation of glomerular filtration rate in children. It was used for decades due to the ease of bedside calculation and validation done in 1970s.

However, recently it was observed that it tended to overestimate the glomerular filtration rate (GFR) as compared to recent gold standard of GFR estimation using iohexol. It was inferred that this was due to the more accurate enzymatic method of estimation of creatinine compared to the old Jaffe’s chromogen method. A newer formula, dubbed the modified Schwartz formula [3], was arrived at, which employed a lower constant.

There has been a significant rise in the prevalence of pediatric CKD worldwide over the past few years [4]. This may be due to early detection of cases during childhood and longer survival of patients due to widespread availability of dialysis and transplantation. The prevalence of children diagnosed of end stage renal disease (ESRD) ranges from 65 to 85 per million age related population (pmarp) based on registries of western countries [5]. Until 2008, the incidence of children less than 20 years of age receiving renal replacement therapy (RRT) was about 9 pmarp worldwide [3] while it was 15.5 pmarp in the USA [6]. Adolescents receiving RRT outnumber the children based on registries [6]. The incidence and prevalence in India, similar to other developing countries, is unknown so far due to lack of pediatric CKD registry.

The etiology of CKD varies not only among pediatric and adult patients, but also within the pediatric group. Congenital Anomaly of Kidney and Urinary Tract (CAKUT) is the most common cause in children followed by chronic glomerulonephritis and inherited nephropathies [7,8]. Among adolescents, chronic glomerulonephritis predominates. Few causes of CKD may present as medullary nephrocalcinosis like renal tubular acidosis, hyperparathyroidism, alprot syndrome, infections and many other (Figure 1) [9]. However, evaluation of the urinary tract is extremely essential among all pediatric cases to assess reversibility, to reduce incidence of infections and prior to transplantation. Recent data shows that obese children [10], premature, low birth weight, and small for gestational age [11] babies are prone to CKD in their adolescence. Registry data also reflects a racial and gender based diversity in the etiology and prognosis. African Americans in North America and native aborigines in Australia have increased incidence of CKD and faster progression to ESRD as compared to their Caucasian counterparts [5]. Males are more common than females, probably because CAKUT is more common in males [5].

Children and adolescents share common complications of CKD like anemia, hypertension and cardiovascular disease with their adult counterparts. However, there are certain complications which are special among pediatric patients. Growth retardation and maldevelopment of neurocognitive skills are chief among them.

Short stature is defined as height two standard deviation scores below that for the same age and sex [12]. However, it is necessary to use growth charts appropriate for the respective race as well. North American Pediatric Renal Trials and Collaborative Studies (NAPRTCS) registry data has revealed that about one-third of pediatric patients have short stature [13]. Even after advancement in the therapy of CKD about 30 to 60% of patients have short stature (Figure 2) [14]. Their height is usually less than third percentile for the age and this is attributed to multiple factors like uremic anorexia induced under-nutrition, increased protein catabolism, water and electrolyte abnormalities, hormone imbalance and resistance, persistent metabolic acidosis, mineral bone disease, anemia and use of corticosteroids for nephritic syndrome and for transplantation [15-17]. Under-nutrition predominates as the etiology for short stature during infancy and childhood as growth during this period is dependent on the calorie and protein intake [15]. Growth hormone resistance occurs due to chronic inflammation and acidosis [18,19]. Imbalance in normal sex hormone production occurs in CKD. Latter two factors are primarily responsible for the lack of pubertal growth spurt in CKD and improper development of secondary sexual characters among adolescents. It has been observed that children transplanted before puberty, or those who are administered growth hormone regularly may achieve catch up growth [20,21]. 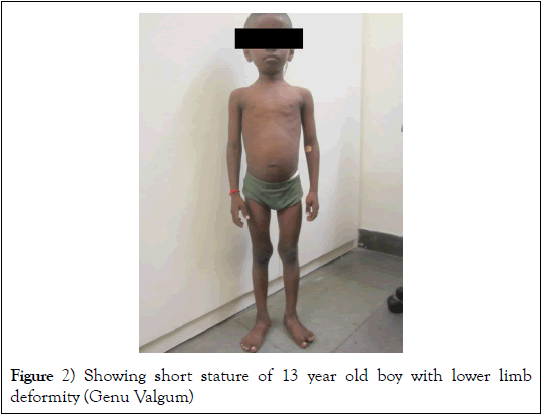 Long term follow up of children diagnosed with CKD exhibit certain psychosocial issues due to multiple factors [22]. Lack of independence, dependence on dialysis, multiple medications, poor quality of life, short stature and excessive parental indulgence compared to their healthy peers leads to a sense of inferiority complex, alienation and depression among these children [23]. Cognitive skills also have been seen to be impaired among patients who reach adulthood. Overall, children with CKD have been observed to have lower health related quality of life scores [24] (HRQoL).

Anemia is commonly observed among patients with CKD. A criterion for diagnosis of anemia in children with CKD has been given in Table 1 as described in KDIGO Clinical Practice Guideline for Anemia in Chronic Kidney Disease Kidney International [25].

Registry data reveals that the prevalence of anemia ranges from 73% to 93% over worsening grades of pediatric CKD [26]. Decreased erythrocyte survival, hemolysis, erythropoietin deficiency and blood loss from gut and during dialysis are among the predominant causes of anemia [27,28]. A steady decrease of 0.3 g/dL for every 5 ml/min decrease in eGFR has been observed [29]. Anemia is attributed to impairment of neurocognitive skills [30], poor quality of life [31], increased fatigue, generalized weakness, and cardiomyopathy [32] among these patients.

Cardiovascular complications have been found to be the most common cause of mortality in pediatric CKD [33,34] similar to adult CKD. Hypertension, a traditional reversible risk factor for cardiovascular disease, has been frequently observed among CKD patients. Among these, patients with glomerular diseases had a higher incidence and required multiple antihypertensive drugs as compared to those with other etiologies. The CKiD cohort study [35] has revealed that 54% of patients had uncontrolled hypertension and 48% of patients had uncontrolled blood pressure levels in spite of antihypertensive drugs. In addition, 38% had masked hypertension, unmasked during 24 hour ambulatory blood pressure monitoring [35].

As mentioned earlier, cardiovascular disease is the most common cause of mortality among pediatric CKD, arrhythmia and cardiomyopathy being the most common [36]. Uncontrolled hypertension, anemia, fluid overload, left ventricular hypertrophy, vascular calcification, hyperparathyroidism and chronic inflammation are major factors among them [37]. It is therefore important to control these risk factors before they may result in advanced cardiac disease.

Management of pediatric CKD involves screening for renal disease, early detection, and retardation of progression of early stages of CKD and finally, RRT for those with ESRD. Screening of school children for renal disease has been a part of health programs of many countries [5]. Early intervention has been found to halt or retard the progression of CKD. Medical therapy is warranted for control of hypertension, management of anemia and alleviation of acidosis.

1) Retardation of progression of CKD

Progression of CKD to ESRD has been found to be influenced by several factors. Glomerular diseases progress faster than CAKUT [38]. In this study, uncontrolled hypertension, anemia, heavy proteinuria and male gender were found to be associated with faster progression. Often it remains partially treated or not treated at all. Use of angiotensin converting enzyme inhibitors (ACEi) or angiotensin receptor blockers (ARBs) has been shown to not only reduce blood pressure and proteinuria, but also retard the progression of CKD [39]. Hence they are considered the first line of treatment of hypertension and proteinuria. The ESCAPE trial revealed that intensive control of BP as opposed to conventional control was effective in retarding decline of GFR [40].

Alleviation of anemia is associated with decreased fatigue, reduced cardiovascular risk and better quality of life. However, correction above 13 g/dL has been associated with increased adverse outcomes. Hence among children, a hemoglobin target of 11-12 g/dL is recommended with iron and Erythropoietin Stimulating agent (ESA) supplementation. Iron status needs to be corrected prior to administration of ESA [25]. If transferrin saturation level less than 20% and serum ferritin concentration less than 100 ng/ml then oral or parenteral iron therapy is recommended [25].

Studies have shown that providing 80% of recommended nutrition is associated with prevention of short stature in infancy and childhood [18]. Administration of recombinant human growth hormone over two years is usually associated with catch-up growth [41]. Alleviation of metabolic acidosis with sodium bicarbonate or dialysis, correction of mineral bone disease, steroid free regimen during transplantation and correction of anemia are other interventions advised for achieving growth in CKD.

Dialysis among pediatric CKD patients’ needs special consideration as compared to adults, though the modalities are the same. Though peritoneal dialysis was widely prescribed earlier, hemodialysis has surpassed it lately [15]. Though pre-emptive transplantation is recommended, dialysis needs to be performed as a bridging therapy in certain situations. Hemodialysis is associated with frequent visits to the dialysis centres leading to frequent disruption of educational activities. Dependence on dialysis machine, frequent venepuncture of fistulae, scars over arms, and restriction of travel lead to poor quality of life as compared to peritoneal dialysis and renal transplantation. Peritoneal dialysis is associated with more independence, lesser disruption of educational activities and better quality of life. Renal transplantation is associated with better control of hypertension, alleviation of anemia and better quality of life. However, correction of lower urinary tract abnormalities in children with CAKUT is essential prior to transplantation to avoid renal allograft injury. Also lack of adherence to medication has been found to be an important cause of graft loss in adolescents.

Pediatric CKD is different from adult CKD with respect to etiology, presentation and outcomes. Complications like growth retardation and neurocognitive impairment are special issues in such patients. Proper nutrition and growth hormone administration is an essential part of management in addition to other measures. Registry data is needed for estimation of the pediatric CKD incidence and prevalence among developing countries.

The authors declare that there is no conflict of interest that could be perceived as prejudicing the impartiality of the research reported.

This research did not receive any specific grant from any funding agency in the public, commercial or not-for-profit sector.