The acute effects of therapeutic concentrations of simvastatin lactone on mitochondrial respiratory capacity in human skeletal muscle: the LIFESTAT study

Statins are a class of drugs that lower blood cholesterol levels by inhibition of HMG-CoA reductase which thereby reduces the endogenous synthesis of cholesterol and other end-products of the essential mevalonate pathway. They are one of the most used drugs in the world, but have been associated with development of muscular side effects (myopathies), including muscle ache and pain (myalgia) [1-3] and in rare cases rhabdomyolysis [4].

Simvastatin is the most frequently prescribed statin [12] and is highly lipophilic. It is consumed orally in its inactive lactone form, and after ingestion it is hydrolysed to its active, but less lipophilic, compound simvastatin B-hydroxy acid, by carboxyesterases in the intestinal mucosa, liver and plasma [13,14].

Drug transporters have been shown to facilitate influx (organic aniontransporting polypeptides (OATP2B1) [13,15,16] and efflux (multidrug resistance-associated protein (MRP) 1,4,5 [16]) of mainly simvastatin acid in skeletal muscle tissue. But due to their lipophilic structure, both the acid and lactone forms of simvastatin are capable of entering various tissues including skeletal muscle by passive diffusion.

Thus, simvastatin acid and lactone have the potential to accumulate in skeletal muscle, and cause myotoxic effects. However, the intramuscular simvastatin concentration in patients in simvastatin therapy has never been investigated and is thus unknown.

Previous studies have used supratherapeutic simvastatin concentrations to simulate intramuscular statin accumulation, and found impaired mitochondrial complex I linked respiration in human myotubes [17] and rat skeletal muscle [18] in vitro. However, the simvastatin concentrations used were up to 1000 times higher than the reported human plasma concentrations, and it is unclear if the simvastatin used was in its acid or lactone form. A few studies have differentiated between simvastatin in its lactone and acid form and the former has been found more toxic than the latter in in vitro in rat [19] and human myoblasts [20].

The muscle samples for the present study were generated from a subgroup of a larger ongoing study: the LIFESTAT study [12]. The study followed the Helsinki declaration and was approved by the local - ethics committee (protocol number: H-2-2013164), and all subjects signed a written consent form before enrolling in the study.

Under magnification, the muscle biopsy was carefully teased with sharp forceps to separate the muscle fibers and remove connective tissue. The bundle of teased muscle fibers was then divided into 3 portions, which were permeabilised with saponine (5 μg/ml) in BIOPS [21] on ice for 30 minutes. Two parts were added simvastatin lactone dissolved in dimethyl sulfoxide (DMSO) (0.1 μM simvastatin lactone (Sim 0.1 μM) and 1 μM (Sim 1 μM )) for simultaneous statin incubation and permeabilisation, while the third part served as a control.

This was followed by Cytochrome C (10 μM ) to ensure integrity of the outer mitochondrial membrane. 10 mM succinate was added to yield maximal complex I+II linked respiration, followed by rotenone (0.5 μM) to inhibit complex I and isolate complex II linked respiration. Finally, muscle that initially was incubated with Sim 1 μM was finished by a stepwise simvastatin lactone titration into the respiration chamber, after the rotenone titration (complex II), with the purpose of increasing simvastatin lactone doses to concentrations of: 8.5 μM, 13.5 μM, 18.5 μM, and 23.5 μM to mimic intramuscular accumulation.

Pure simvastatin in its lactone form was kindly donated by Teva Pharmaceutical Works Private Limited Company, Hungary, and dissolved in DMSO to a stock solution of 0.5 mM. The solution was prepared fresh on each experimental day.

Data was analyzed by two-way ANOVA for repeated measures and Holm- Sidak was used as post hoc test. The effect of simvastatin titrations on mitochondrial respiration was analyzed by one way ANOVA for repeated measures. Statistical analyses were performed using SigmaPlot 13.0 (Systat Software, San Jose, CA, USA). Data is presented as mean ± standard error of the mean (SE). P<0.05 was considered significant.

There were no differences between maximal mitochondrial complex I or I +II linked respiration between the untreated muscle tissue (Control) and muscle tissue incubated with simvastatin lactone (Sim 0.1 μM and Sim 1 μM) (Figure 1). Cytochrome C addition yielded no significant increase in respiration rate in either protocol (data not shown). 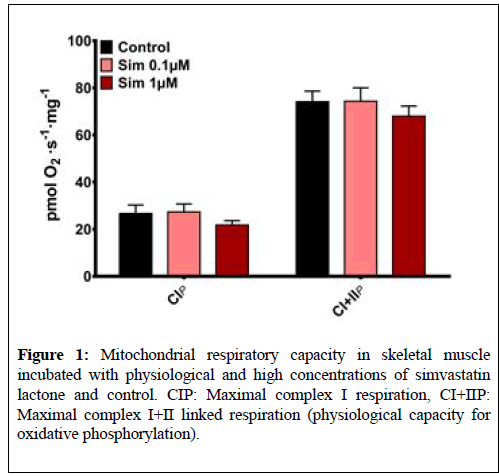 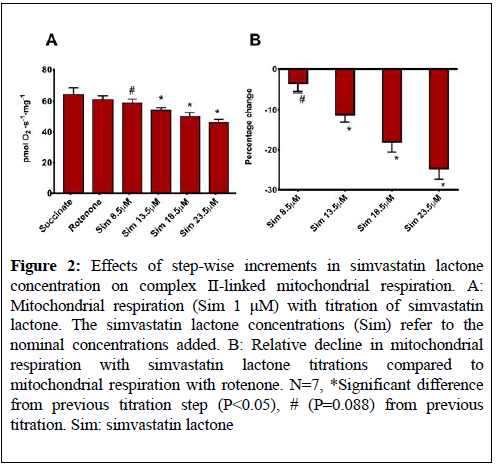 Several studies have investigated the prevalence of statin induced myalgia with results that range from <1% to >60% in athletes [22,23]. Yet, the underlying mechanism(s) remain unknown. Different theories have been put forward to explain these statin induced side-effects. One theory is that reduced cholesterol synthesis results in reduced cholesterol content in the skeletal muscle membranes, rendering them unstable [24]. Another theory is based on reduced synthesis of other end-products of the mevalonate pathway, including coenzyme Q10 (CoQ10) [25].

Reduced CoQ10 in the mitochondrial electron transfer system may impair the capacity for oxidative phosphorylation and compromise the energetic state in the skeletal muscle, which could explain the myalgia and exercise intolerance reported with statin treatment [26].

In fact, studies have reported impaired mitochondrial respiratory capacity with statin treatment [7,27], but the current literature on whether statin therapy reduces CoQ10 levels in skeletal muscle are inconclusive [28-31]. Although reduced muscle CoQ10 and impaired mitochondrial respiratory capacity is a plausible explanation for development of statin induced myalgia, it is unlikely the sole underlying mechanism. Since the ratelimiting enzyme in the mevalonate pathway is inhibited by the active simvastatin acid and not the inactive lactone, the mechanism behind the acute toxicity seen with high concentrations of simvastatin lactone in vitro must be unrelated to the mevalonate pathway. However, if toxicity is only observed in vitro with supratherapeutic concentrations, the underlying mechanism may not be clinically relevant.

In the present study we report an acute impairment of mitochondrial respiration only when increasing the simvastatin concentration to 13.5 μM, which mimics an extreme 2500-7000 fold accumulation, and thus we consider it supratherapeutic. When simvastatin lactone doses were increased even further from 13.5 μM to 18.5 μM and 23.5 μM, mitochondrial respiration declined in a dose-dependent manner. While it is well established, that HMG-CoA reductase is inhibited by statins in a competitive dose-dependent manner [34,35], dose-dependency in the relationship between statin therapy and development of myopathies is less apparent [36]. The results of the present study may well be an indication that a dose-dependent impairment only occurs when the intracellular simvastatin lactone concentration rises above a certain threshold.

Therefore individual susceptibility and differences in the capacity for absorption, transport and elimination of statins may play a role in explaining why some develop myopathies. Simvastatin is generally well absorbed from the intestine [37], but individual differences in the abundance of Cytochrome P450 3A4 (CYP3A4) that metabolizes simvastatin [38] has previously been reported [39,40]. A low abundance of CYP3A4 in the liver and/or skeletal muscle would result in an elevated bioavailability and presumably an elevated intramuscular statin concentration, which would increase the potential for developing myopathies.

Genetic factors may be responsible for individual differences in the abundance of CYP3A4 and the transport capacity of MCT4, OATP2B1 and MRP1,4,5, and could be the reason some experience accumulation of statins and myopathies. We speculate that patients experiencing muscular side-effects are genetically disposed to statin accumulation in the muscle.

Thus, in order to more closely elucidate the role of simvastin´s metabolites in the development of muscular side effects of statin therapy, further studies addressing the dynamics of intramuscular simvastatin concentrations and its individual susceptibility are warranted.

Anja Birk Kuhlman and Thomas Hoffmann Morville are thanked for collecting muscle biopsies, and Maria Dahl is thanked for assisting with preparation for the analysis of mitochondrial respiration.

This work was supported by the University of Copenhagen 2016 Center of Excellence grant to the LIFESTAT–Living with statins project, and by the Nordea Foundation.

All authors have read and approved the final version of this manuscript. None of the authors have conflicts of interest to disclose.