RESULTS: Virologic failure (HIV 1 viral load >1000 copy/ml) was detected among 15 samples out of total 365 HIV/AIDS patients (on 2nd line ART) recruited. Genotyping was successful for 9 samples having >2000 HIV/ml and remaining 6 samples could not be genotyped due to low viral copy. DR mutations were detected in 5 out of 9 samples and among the rest 4 samples no HIV DR mutation was detected. Among NRTI based drugs, M184V and M41L were the predominant mutations (80%). For NNRTI based drugs, A98G and Y181C were predominant (80%), conferring resistance to DLV and NVP. Again for PIs, l54V, A71V, V82A and M46L were seen in 40% of the cases conferring resistance to IDV, SQV, LPV, NFV and ATV.

CONCLUSION: Study on virologic failure in the absence of HIV DR mutations might help in understanding further the HIV DR dynamics as well as planning for better clinical management for patients with HIV/AIDS.

The criteria to shift to second line ART are failure in clinical and/ or immunological and/ or virologic parameters in a patient on first-line ART for 6 months or more. An important target of ART is Protease (PR) that is vital for HIV replication and crucial for completion of its life cycle. Different PR inhibitors (PIs) have been approved by regulatory authorities and are in use. PIs are administered as single drug with 2 nucleoside reverse-transcriptase inhibitors (NRTIs) as second-line ART. Since 2005, boosted PIs are endorsed in combination with low-dose RTV to heighten the level of companion PIs. When PI-based ART fails, viral variants resistant to PIs emerge [8-13]. Major mutations due to amino acid substitutions alter the PR catalytic activity that consequently affects virus replication capacity [14-16]. Conversely, emergence of compensatory mutations restores replication capacity [17]. Moreover, mostly the drug resistance mutations of PR also confer cross resistance to other PIs in the class. These mutations seem essentially class specific rather than drug specific [18,19]. Boosted PI based combination ART is an efficient strategy post NNTRI-based first line ART failure. PI resistance at NNRTIbased first-line ART failure is uncommon [19].

Thus, resulting PI-based second-line ART becomes highly potent [20]. Introduction of generic first-line drugs along has considerably reduced the morbidity and mortality globally. However, in resource-limited settings, HIV viral load monitoring is rarely feasible [20]. Due to absence of VL monitoring, early virologic failure remains undetected and treatment continues to be on the failing regimen until patient develops clinical or immunologic failure resulting accumulation of drug resistance mutations [21]. High levels of HIV DR to first-line ART have been reported widely [21-24]. As a result treatment has been upgraded to PI-based second-line ART regimens in India. However, the second line ART program is somewhat limited in Indian context. Without drug resistance assay and regular virological failure monitoring, the consequences of second line therapy outcomes might remain unclear also. It is therefore, essential to assess the emergence of HIV drug resistance mutations beside clinical, virological, and immunological parameter for treatment outcomes for patients switched to second line ART. This study, first of its kind from eastern India, aimed to investigate the extent HIVDR mutations among virologic failure PLHIV on second-line ART in Kolkata.

The study was conducted at Virology Laboratory, ICMR-National Institute of Cholera and Enteric Diseases, Kolkata. A total of 365 HIV/AIDS patients on 2nd line ART were recruited over a period of five years during January 2009 to December 2013. The study procedures followed Helsinki declaration 1975 and revision in 2000. The inclusion criteria were (i) consenting adult HIV/AIDS patients, age >18 years and on 2nd line antiretroviral therapy and (ii) Virologic failure (plasma HIV 1 RNA level more than 1000 copies/ml) on 2 consecutive testing on 6 month interval. Exclusion criteria were if (i) blood sample was insufficient for sequencing

(ii) missing in follow up and (iii) patients were diagnosed with HIV 2 and/or HIV 1/2 coinfection materials.

Approximately 10 ml blood sample was collected from each participant. An aliquot of 3 ml sample was used for CD4+ T cells count estimation. Plasma was separated from remaining sample within 6 hours of collection and stored at -70°C in 1 ml aliquots. Guidelines of WHO and HIV Res Net Laboratory Working Group resistance testing were followed for HIV-1 RNA quantification (plasma VL) and genotyping for HIVDR mutation [25].

Data was analysed employing Microsoft Excel using Annova for clinical and biological characters of patients to find out frequency (%) for the categorical statistical parameters. 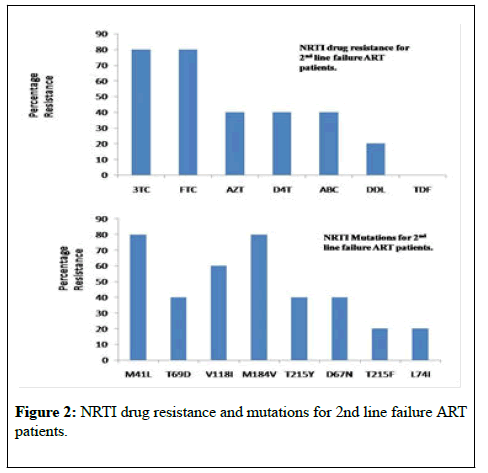 These mutations do not cause drug resistance by themselves but increase drug resistance when present together with other mutations thereby compensating the decrease in catalytic efficiency caused by other PR mutations. I54V, A71V, V82A and M46Lwere predominantly observed among participants in this study. Out of the 9 patients studied for 2nd line ART failure, in 4 PLHIVs no mutation was found with reference to Stanford HIV drug-resistance database (http://hivdb.stanford.edu/) for such sequences. One of the individuals showed only NNRTI mutations A98G, K103N, Y181C conferring resistance to DLV, NVP and EFV (Table 2: for drug name abbreviations).

Studies on HIV drug resistance mutations among second line ART failure patients from eastern India reveals mutations among NRTI based drugs predominantly for M184V and M41L, and for NNRTI based drugs, A98G and Y181C with 80% conferring resistance to DLV and NVP. For PI mutations, l54V, A71V, V82A and M46L were seen in 40% of the individuals conferring resistance to drugs IDV, SQV, LPV, NFV and ATV. However, the most interesting observation was absence of HIV DR mutation in 4 patients out of 9 patients on 2nd line ART failure. Pattern of mutations suggests that majority of the patients participated in this study remain susceptible to DRV/r, followed by TPV/r. Of the 2 pathways that contribute to LPV resistance the IDV-like pathway caused by mutations at positions l54V, A71V, V82A and M46L was frequently observed among the ATV- and IDV-exposed groups. This could be because patients in this study had been increasingly substituted from IDV- to ATV-based regimens. Randomized clinical trials in developed countries show that the combination of raltegravir, ETR, and DRV/r was well tolerated and was associated with the rate of virologic suppression similar to that expected in treatment-naive patient [28].

This is highly contrasting compared to 100% HIV DR mutilations observed among patients on first line ART failure from the same geographical region [29]. Adherence factors might be responsible for the study patients failing second-line ART rather than HIV strains resistant to ARV drugs, which corroborates to observation among programmatic cohorts in resource limited settings [30]. HIV drug resistance surveillance outcome among patients failing second-line ART helps in planning evidence driven treatment regimens for patients needing third-line ART. Availability of ARV drugs for those failing second-line ART might be an issue. Failing second line ART that we have encountered here necessitates planning for 3rd line ART program ensuring affordable and accessible supplies of darunavir and raltegravir.

With the introduction of ART, up to 80% decline in rates AIDS associated death has been reported [31] but it also leads to the steady rise of HIV DR mutant variants that are the major cause of ART failure [32-35]. These variants become predominant over time and pose a major challenge for both ART exposed as well ART naïve patients [36]. The gradual transmission of resistant mutants from ART-experienced patients to ART naïve individuals was reported from developed countries with even having good access to antiretroviral drugs [37-40]. However, of late, scaling-up of ART lead to the emergence of mutations in resource limited countries too [41]. WHO recommends periodic surveillance of transmitted drug resistance (TDR) mutations in ART naïve newly infected PLHIV in distinct geographical areas [42].

Currently to optimize ART regimen for scaling up, routine assessment of drug resistance-associated mutations prior to ART initiation is recommended where primary resistance has been consistently recorded [43]. Deficiency in baseline HIVDR data, interruption in treatment and improper administration of drug regimens could be the major factors of occurrence and expansion of drug resistance in resource limited countries.

The authors would like to acknowledge the staffs for support in the course of this study.

Authors have seen and approved the manuscript being submitted and there is no conflict of interest. We warrant that the article is the Authors' original work. This research has not been submitted for publication nor has it been published in whole or in part elsewhere. Authors listed on the title page have contributed significantly to the work, have read the manuscript, attest to the validity and legitimacy of the data and its interpretation, and agree to its submission to the Journal for publication

Annual Congress on Vaccines and Immunization