Congenital variations of the inferior vena cava can result in grave consequences during abdominopelvic surgeries and clinical procedures. The presence of a double inferior vena cava (DIVC) variant can lead to misdiagnoses of paraaortic lymphadenopathy, saccular aortic aneurysms, pyeloureteric dilations, loops of small bowel, and retroperitoneal cysts among surgeons and radiologists. In this case study, a previously unreported variant of a DIVC with interiliac communication was identified in an 85-year-old Caucasian female cadaver. The interiliac communication, which crossed inferior to the sacral promontory at the S1 vertebral level, is particularly at risk during traumatic pelvic fractures, placement of a pelvic C-clamp to stabilize pelvic fractures, and anterior lumbar interbody fusion. Furthermore, an unidentified DIVC can lead to clinical complications, such as recurrent emboli following single IVC filter placement, difficulties inserting a guide wire during balloon mitral valvuloplasty, and hemorrhagic events following iatrogenic laceration of the DIVC during abdominopelvic surgeries. Knowledge of the embryological origin and anatomical categorization of DIVC variants is crucial to physicians treating these venous anomalies in a clinical setting.

The double inferior vena cava (DIVC) is a rare congenital variation arising from persistence of embryologic structures that fail to complete their course of development [1-5]. Often asymptomatic clinically, DIVC are typically discovered via cadaveric dissection or through CT imaging but can also been seen with duplex ultrasound and magnetic resonance angiography [6,7]. However, failure to identify a DIVC prior to retroperitoneal surgery or while the patient is in a hypercoaguable state may have massive hemorrhagic or thromboembolic consequences, respectively [5,6,8-12]. DIVC prevalence has been reported as 0.02% to 1.1% in radiologic series, 0.1% to 1.2% in surgical series, and 0.2% to 2.8% in autopsy series [3,6]. A slight male prevalence of 59% has also been reported [6]. DIVC categorization varies, but is based on factors such as the presence or absence of an interiliac communicating anastomosis, the relative diameter of left and right inferior vena cava (IVC) branches, and the gross appearance of the preaortic anastomotic trunk [13,14]. The Morita et al. (2007) study divided pelvic venous variations into four classifications with normal iliac connection as “Type 1”, and following identification of 28 DIVC variants, the DIVC was classified as “Type 2” and placed in one of five sub-categories (Types 2a-2e), as shown in Figure 1, based on how the interiliac communications are formed [13]. 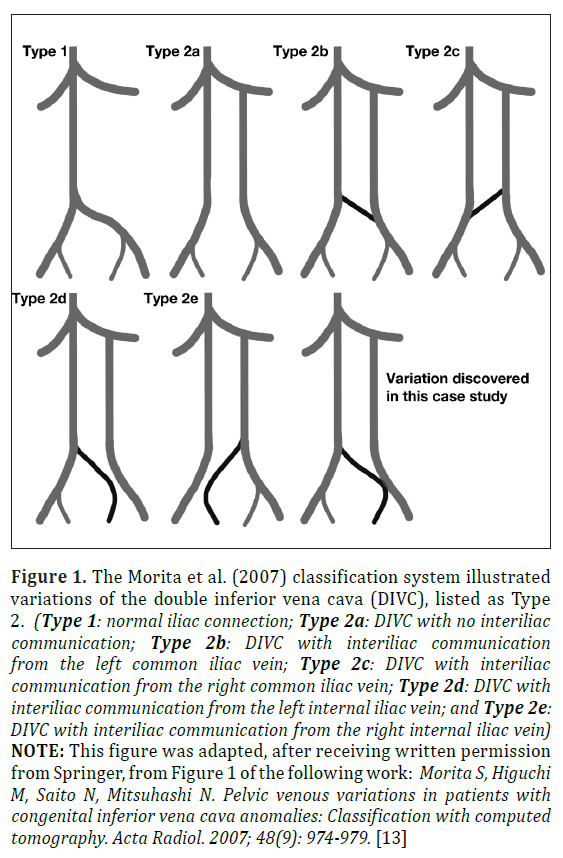 In this case study, a rare variant of the double inferior vena cava (DIVC) exhibiting an interiliac anastomosis is shown, with consideration of its associated embryological origins, along with the relative anatomical, surgical, and hemodynamic clinical correlates.

A double inferior vena cave (DIVC) with interiliac communication was discovered during routine dissection of the abdominopelvic region of an 85-year-old Caucasian female cadaver at the West Virginia University School of Medicine who died of multisystemic disease. The two common iliac veins, instead of anastomosing at the typical L5 vertebral level location, represented a left and right inferior vena cava (IVC), ascending bilaterally on either side of the abdominal aorta, arching anterior to the aorta to form a single IVC between levels L1 and L2 (Figure 2). The left IVC displayed a diameter of 13.93 mm and a length of 106.82 mm, and ascended from the S2 vertebral level at the anastomosis of the left internal and external iliac veins. An ascending interiliac communication arose from the junction of the left internal and external iliac veins and crossed the midline inferior to the sacral promontory to join the right IVC at the S1 vertebral level. Of particular interest, this interiliac communication is primarily a continuation of the left internal iliac vein. However, due to its connection to the external iliac vein, the interiliac communication could drain blood from both the left internal and external iliac veins. This interiliac connection possessed diameters of 12.64 mm at its left origin (at the junction of the left and right iliac veins) and 10.74 mm at its right insertion into the right IVC. The right IVC also arose from the junction of the right internal and external iliac vein, exhibiting a length of 93.25 mm and a diameter of 15.74 mm. Immediately inferior to the union of the left and right IVC, the left renal vein emptied into the left IVC, which coursed anterior to the aorta to meet the right portion of the IVC. Also of interest, the suprarenal vein drained into the left IVC with an additional vein arising from the left renal vein, near the hilum of the kidney, anastomosing with this suprarenal vein before its insertion into the left IVC. Together, the two IVCs formed a common IVC (preaortic trunk) with an initial diameter of 37.70 mm at the inferior union, which narrowed as it ascended to become 31.72 mm in diameter superiorly (Figure 2). Other DIVC case reports describe associated abnormalities in the renal and gonadal vessels [1,14,16]. In this case report, we observed a venous communication between the left renal vein and the left suprarenal vein, which joined to drain into the left IVC (* in Figure 2). Moreover, within DIVC patients, the left kidney is often lower in position than the right kidney due to the pull by the left IVC on the left renal vein, which was also evident in this case (Figure 1) [17]. These venous abnormalities have led to urogenital complications during kidney removal for the purpose of donation [6,18] and even obstruction of the ureter [19].

Problems also arise clinically for surgeons and radiologists in DIVC patients due to the variant venous formation. In the event of a deep vein thrombus, successful filter placement and subsequent prevention of emboli are complicated in a patient with a DIVC [5,6,8-10,12,20-22]. Physicians should consider this venous anomaly in the case of recurrent pulmonary emboli after IVC filter placement due to the fact that collateral venous pathways may present the opportunity for emboli to travel unanticipated paths [6,20,21]. With many different potential filter placement locations in a DIVC patient, placement of bilateral IVC filters may be the safest and most successful technique in preventing recurrent emboli [6,9]. Moreover, a possible relationship between the presence of a DIVC and thrombosis of the IVC, iliac, and femoral veins has been observed, especially in young adult patients [23-27]. One study even suggests that thrombi are triggered by the presence of a DIVC [25]. The reported occurrence of thrombi may be more prevalent in male DIVC patients [27]; however, similar incidence rates in both males and females have also been reported [28]. Also, variant DIVC venous patterns can lead to difficulties inserting a guide wire into the right femoral vein during balloon mitral valvuloplasty, specifically when the right IVC is narrow [29]. There have also been cases where a DIVC has complicated procedures such as gonadal vein embolization or when obtaining a sample from a renal vein [6].

The presence of a DIVC can also lead to misdiagnoses among clinicians [5,6,30]. A thrombosed DIVC was misinterpreted as a paraaortic lymphadenopathy, which led to an unnecessary laparotomy and biopsy [22,30]. In another case, a misdiagnosed DIVC led to unnecessary chemotherapy treatment [6]. DIVC have also been misidentified as saccular aortic aneurysms, left pyeloureteric dilations, loops of small bowel, and retroperitoneal cysts [28,31]. Therefore, vascular and interventional radiologists recommend the use of intravenous (IV) contrast medium during CT scans in conjunction with awareness of DIVC anomalies to avoid similar misdiagnoses [30].

The presented DIVC with interiliac communication may also lead to significant blood loss, and subsequent complications, during abdominopelvic surgeries or trauma cases [5,6]. In fact, an intraoperative loss of 8420ml of blood was reported in a 56-year-old male patient when his left upper DIVC was discovered within a densely fibrotic abdominal aortic aneurysm [11]. In DIVC patients undergoing abdominal surgery, a transperitoneal approach rather than a retroperitoneal approach is recommended to better visualize and control the anomalous blood vessels [6]. Pelvic fractures following high-speed motor vehicular accidents (MVA) have also caused significant hemorrhaging in DIVC patients, which is particularly important in this case considering the interiliac communication rested against the S1 vertebra [32]. At this location, the interiliac communication is at risk during the traumatic event itself and subsequent placement of the pelvic C-clamp to stabilize the fracture [32]. The location of this DIVC variant and its interiliac communication may also be detrimental during orthopedic approaches to anterior lumbar interbody fusion (ALIF) [13]. Therefore, surgeons and clinicians need to be aware that failure to identify venous anomalies, such as the unique DIVC variant identified in this case, can lead to grave clinical consequences during abdominopelvic surgeries.

The authors thank Bruce Palmer for his photography skill, Ben Lasure for preparation of the figure depicting the double IVC variants, and Kristina Addie for sorting the references. Most importantly, we want to acknowledge the individuals who donated their bodies to the West Virginia Human Gift Registry. Without their selfless gifts to advance the education and research of West Virginia University medical students and faculty members, this project could not have been completed.